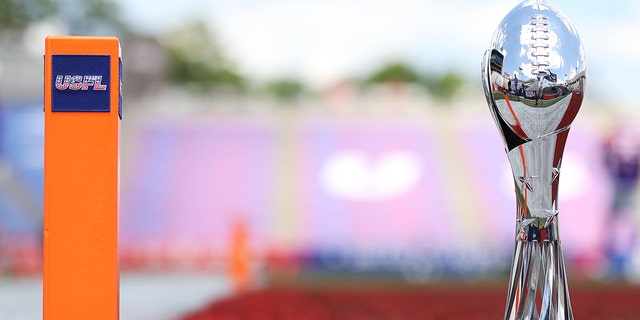 The Generals and Maulers will play each other in their first game of the season on April 23. The site will also host the North Division Playoff Game and the 2023 USFL Championship Game. USFL and Hall of Fame Village officials made the announcement Wednesday.

The USFL Championship trophy is seen on the field during the warmup for the game between the Birmingham Stallions and the Pittsburgh Maulers at Protective Stadium on May 29, 2022 in Birmingham, Alabama.
(Donald Page/USFL/Getty Images)

“The USFL is pleased that the Pittsburgh Maulers and New Jersey Generals will practice and play games in Canton during the 2023 regular season,” said Daryl Johnston, the USFL’s executive vice president of football operations. “The outstanding regional support we received during our first postseason from football fans in Ohio and Pennsylvania, including the great city of Pittsburgh, coupled with our successful partnership with the Hall of Fame Village, has led to this moment.”

The USFL hosted its championship game and playoffs at the facility last season. The Generals were the North Division champions, but lost to the Philadelphia Stars in the playoffs.

Detail view of a New Jersey Generals helmet atop a Gatorade cart during the USFL playoff game against the Philadelphia Stars on June 25, 2022 at Tom Benson Hall of Fame Stadium in Canton, Ohio.
(Joe Robbins/Icon Sportswire via Getty Images)

The Birmingham Stallions defeated the Stars 33-30 in the Championship after beating the New Orleans Breakers in the playoffs.

“Following the incredible response from football fans during last year’s USFL postseason, we are excited to expand our partnership by hosting regular season games in 2023,” said Michael Crawford, CEO of Hall of Fame Resort and Entertainment Company, in a statement. press release. “The USFL is a fan-first league, so we are creating a fun and affordable entertainment destination here in Canton where football fans can cheer for the Pittsburgh Maulers, New Jersey Generals and other USFL teams while enjoying a wide variety of programs and activities at the Hall of Fame Village before and after the games.”

The Pittsburgh Maulers flag flies during the game against the Michigan Panthers at Legion Field on June 19, 2022 in Birmingham, Alabama.
(Mercedes Oliver/USFL/Getty Images)

See also  Dem Rep. Garamendi: Biden, Trump Docs Should Be Shared With Congress, 'Frustrating' DOJ Stonewalling Has Been an Issue for Some Time

The USFL will also host games in Birmingham and Memphis this season.

Ryan Gaydos is the sports editor for TUSEN News Digital.