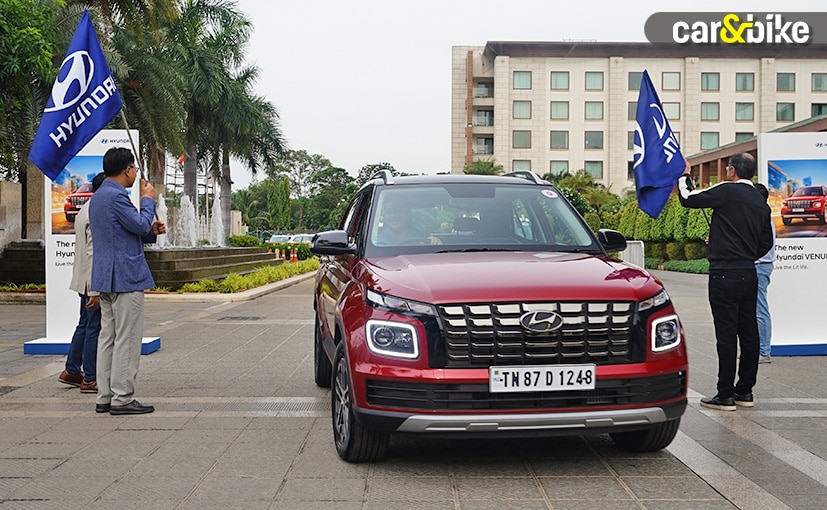 The Hyundai Venue has been one of the most popular compact SUVs in the sub-4 metre space and for good reasons. Ever since its debut in 2019, the Korean marque’s most affordable SUV has been a favourite among younger shoppers or those on a budget, allowing for an attractive alternative to expensive propositions. Its quirky design, potent powertrain options, a decent amount of cabin space, and a well-packaged features list found more than 3 lakh customers. But with growing competition, and the entry of the more feature-packed and connected cars like the Tata Nexon, Kia Sonet, and the undisputed command of the Maruti Suzuki Vitara Brezza in the market, Hyundai had to take matters into their own hands and take things a notch higher. Well, a lot higher! Ladies and gentlemen, meet the 2022 Hyundai Venue facelift.

We traveled to the City of Nizams, Hyderabad, for the test drive of the 2022 Hyundai Venue facelift.

The exterior of the 2022 Hyundai Venue sees a huge overhaul in its styling as the company follows its global design language- Sensuous Sportiness’ design philosophy. The front section is dominated by a chrome-studded grille with black surrounds or what Hyundai calls- Parametric Grille, earlier seen on the new Hyundai Tucson as well as the larger Hyundai Palisade SUV. The turn indicators are new and arranged in a three-piece horizontal graphic with projector headlamps mounted on re-profiled bumpers where the fog lamps have been replaced with wider air inlets and silver faux plates. 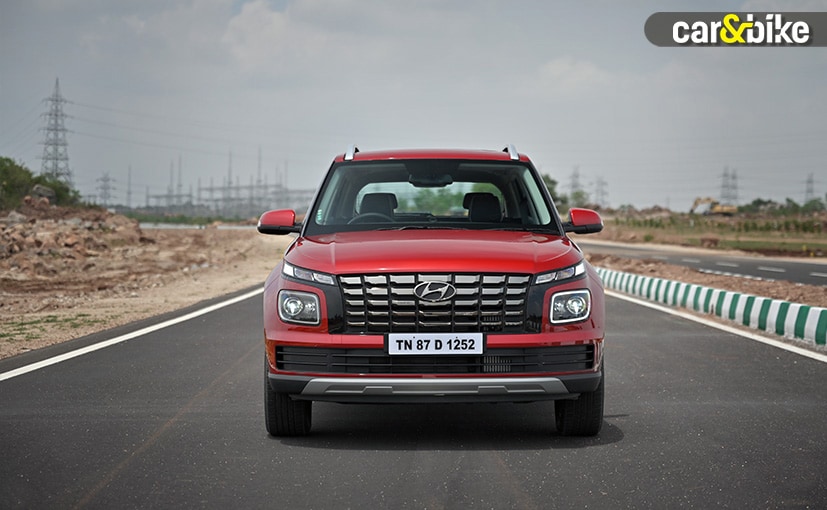 The front section is dominated by a chrome-studded grille with black surrounds or what Hyundai calls- Parametric Grille, earlier seen on the new Hyundai Tucson as well as the larger Hyundai Palisade SUV.

The profile remains largely unchanged albeit a new design for the alloys that looks quite stylish, and trendy as well. The recognisable flat roofline, silver roof rails, and body cladding on the doors are also retained from the outgoing model but the tinge of chrome on the window line adds a fresh appeal to the compact SUV. The 16-inch wheels get a new design for the alloys. If you thought that the front section was bold, then you’d be glad to know that the designers at Hyundai managed to do one up with the rear to make it truly distinct, and not merely a half-baked job. The split tail lamp clusters on either side receive new graphics linked by a well-lit stripe that runs the width of the SUV. The redesigned rear bumpers now house reflectors and bulbs positioned in an upright pattern. 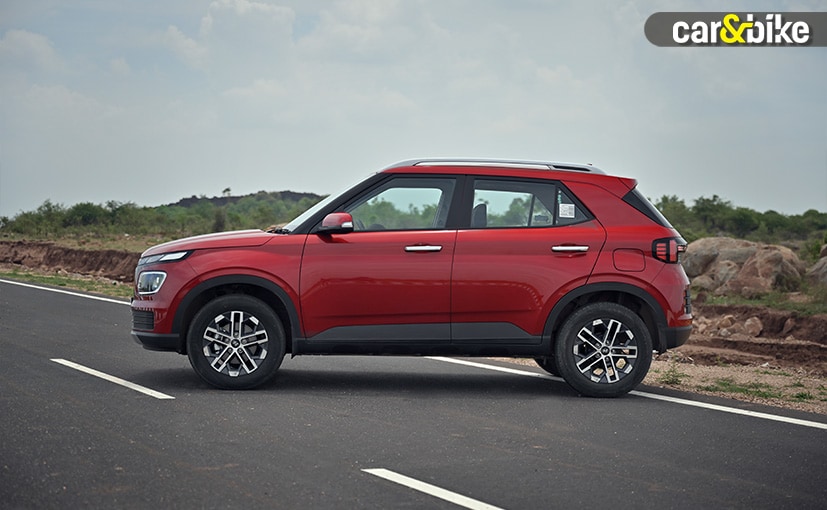 The recognisable flat roofline, silver roof rails, and body cladding on the doors are also retained from the outgoing model but the tinge of chrome on the window line adds a fresh appeal to the compact SUV.

Now, the design would well polarise opinions on social media, but the fact of the matter remains that the 2022 Venue would stand out in a crowd of SUVs of all shapes and sizes. The introduction of the new two-tone Fiery Red with Phantom Black roof adds depth to its proportions, but you also get six single-tone paint schemes to choose from. 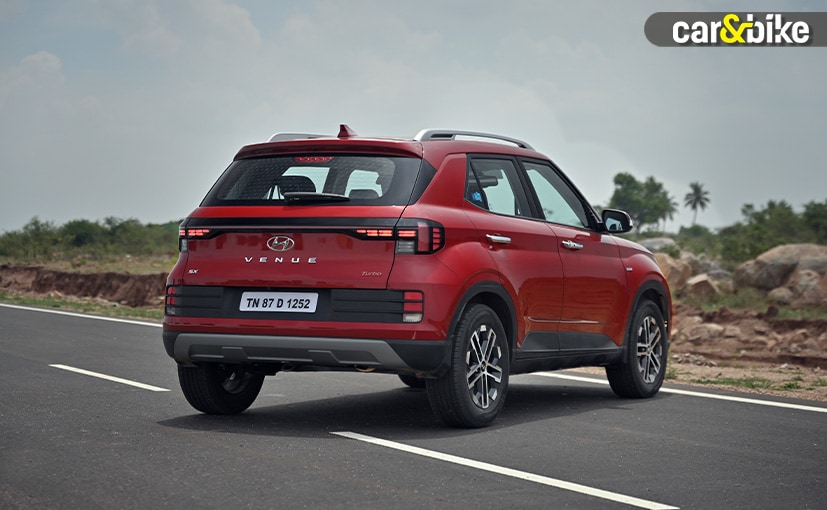 The cabin of the 2022 Hyundai Venue facelift also sees huge changes that make the car livelier than before. The instrument cluster is now all-digital, moving on from the semi-digital unit from before. The theme is customisable. In the 1.0L Turbo DCT version, along with the changeable theme from the drive modes, there’s provision to individually alter it. The 8-inch infotainment unit is carried over from the previous model but gets a software update that makes the interface smoother. 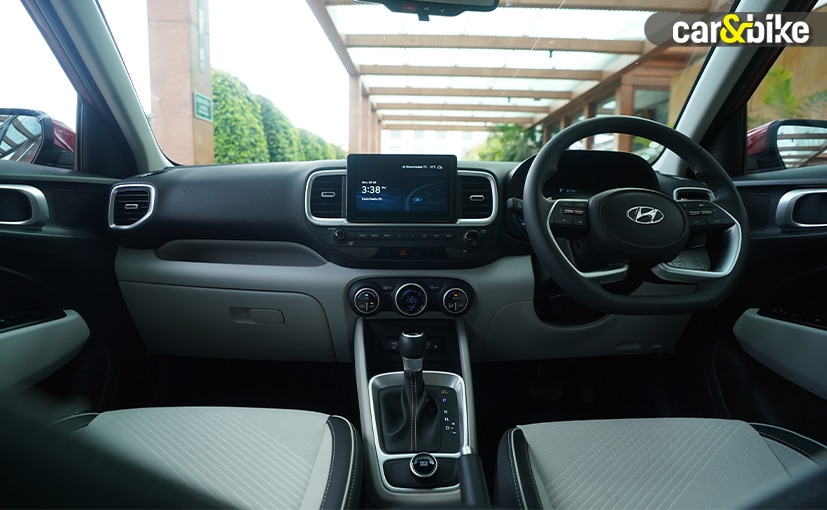 The cabin of the 2022 Hyundai Venue facelift also sees huge changes that make the car livelier than before.

It now supports ten regional and two international languages, along with Alexa and Google Assistant. Hyundai’s BlueLink connected car tech also sees new features and customers can now access over 60 features. You get wired Android Auto and Apple CarPlay on the versions with BlueLink and wireless connectivity on the versions without BlueLink. Hyundai says this has to do with privacy and offering wireless compatibility becomes an issue on select variants. 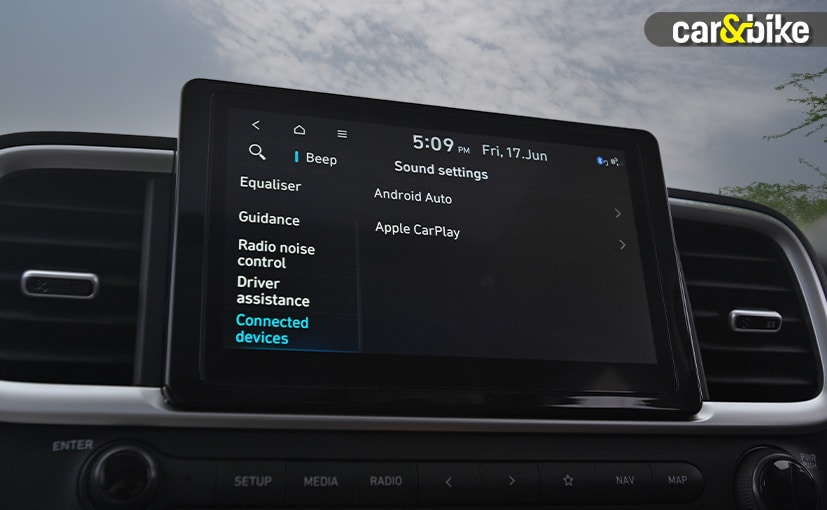 The 8-inch infotainment unit is carried over from the previous model but gets a software update that makes the interface smoother.

Top-spec versions also get wireless charging. Seats can be adjusted 4-ways for the driver while the electric sunroof is retained from earlier. Also new is the black and greige upholstery, which is essentially a combination of grey and beige, but it looks like off-white to us. Hyundai is targeting the car for the younger audience and has customised the cabin accordingly to the taste of the millennials. Traveling in the rear seats is also much more convenient now since there were always complaints with rear row seating on the Venue. 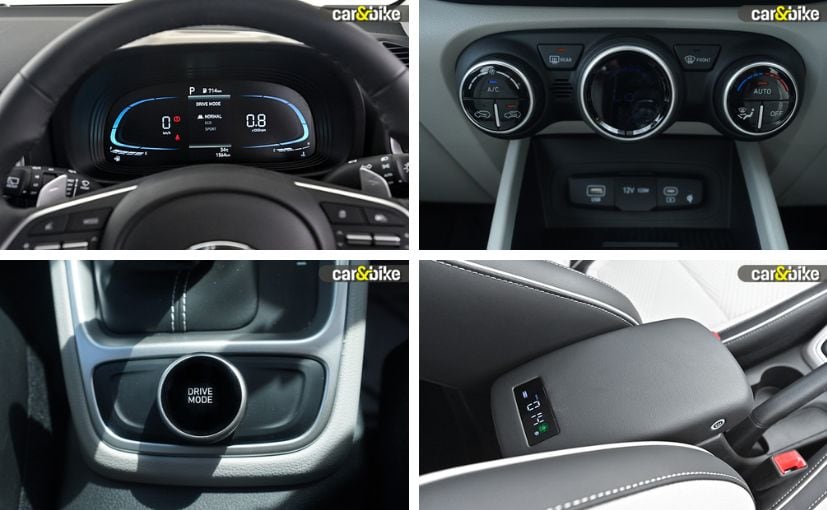 1. The theme on the instrument cluster is customisable. 2. Hyundai is famous for its cooling system, and the Venue is no different. 3. The option for the drive modes is only available with the 1.0 Turbo DCT version. 4. Air purifier is now integrated instead of a unit placed at the front cup holder.

The company has now taken note of this and added a new layout for the seats which are scooped out to liberate extra knee room. The 2-step adjustable seats are a welcome addition as it allows you to recline to a more comfortable position for longer journeys by accessing the small levers placed on either side of the backrests. You get Type-C charging ports with the ability to fast charge for the rear passengers. 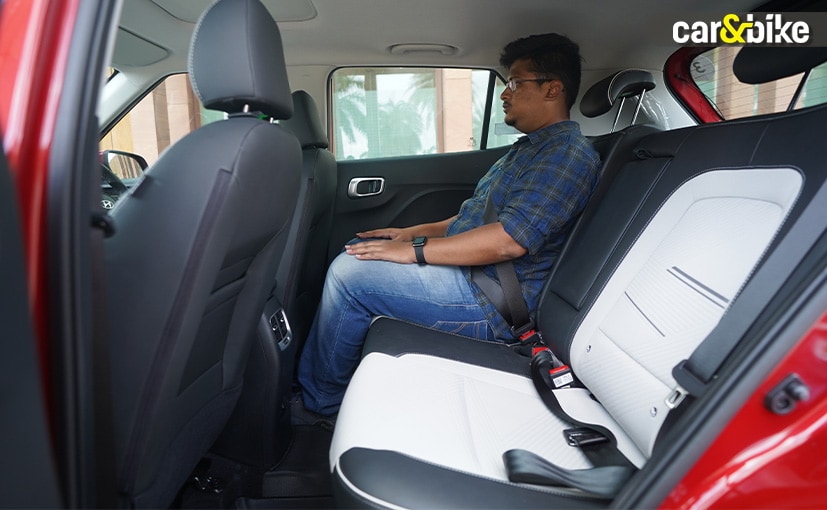 The Hyundai Venue continues with the engine options offered on the previous model and so you get two petrol- a 1.2L naturally aspirated motor paired to a 5-speed manual unit, a 1.0L turbo unit coupled with a 6-speed iMT or a 7-speed DCT, and a 1.5-litre diesel tuned with a 6-speed manual unit. The driving dynamics, ride & handling, and performance remains as before and not much has changed. 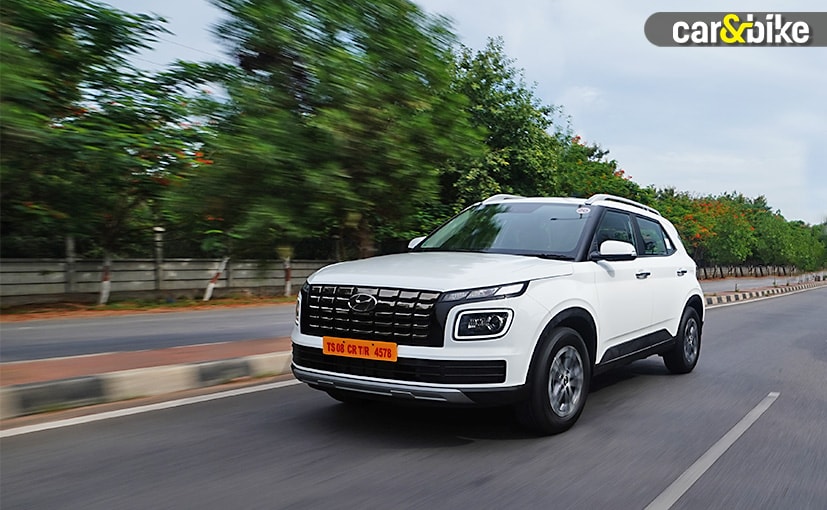 The driving dynamics, ride & handling, and performance remains as before and not much has changed.

However, the 7-speed DCT unit gets a generation upgrade, and we didn’t find much difference apart from the amended throttle response to allow getting off the mark quicker than before. It is also the only unit to get drive modes- Eco, Normal, and Sport. We would soon test this version individually to get its proper essence. The 2022 Hyundai Venue with the iMT gearbox offers the best of both worlds- control of a manual gearbox and the convenience of an automatic. 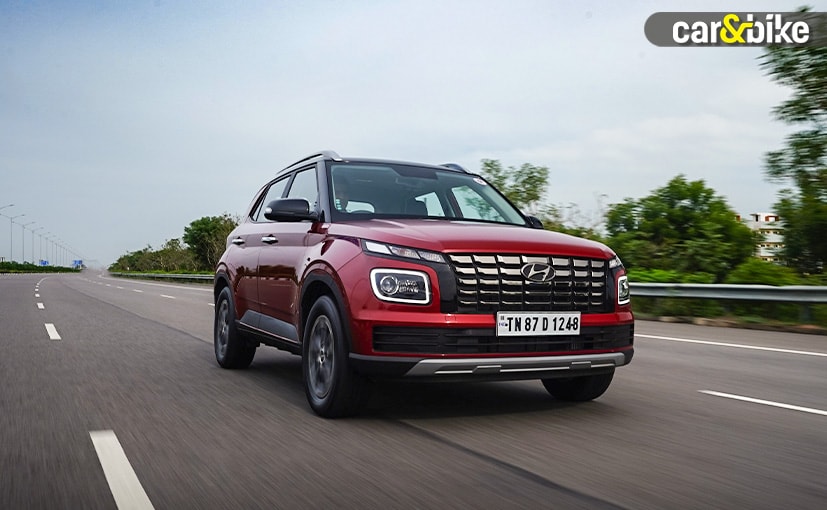 The 7-speed DCT unit on the 1.0 Turbo gets a generation upgrade, but we didn’t find much difference apart from the improved throttle response to allow getting off the mark quicker than before.


The turbocharged unit pairs seamlessly with this gearbox to offer a comfortable drive with little to worry about, and the availability of torque right from the word go only echoes that sensation. Yet, we feel both gearboxes could’ve been much more enjoyable with its diesel model, after all, it is a silent, refined, and extremely frugal mill. 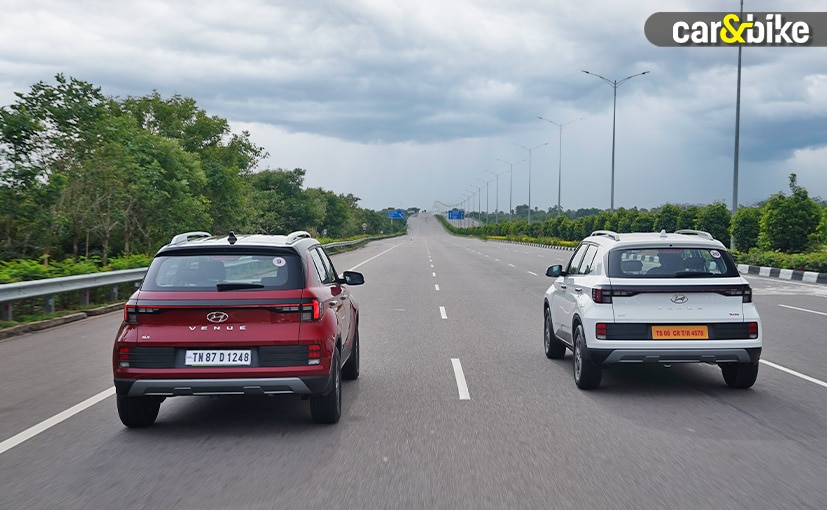 The Hyundai Venue continues to impress with its healthy efficiency return. The smaller yet powerful petrol unit returns more than 18 kmpl on both its gearbox offerings while the naturally aspirated version returns a decent 17 kmpl on its manual gearbox. The larger diesel version is even more fuel-efficient with a figure of 22 kmpl making it one of the most fuel-efficient vehicles in its segment.

Hyundai has also improved the safety levels on the 2022 Venue now. Apart from the 4-star crash test rating from Global NCAP, Hyundai has clothed the car well enough to keep passengers safe. You get 6 airbags, Tyre Pressure Monitoring System, Brake Assist System, Hill Hold Assist, and ISOFIX anchorage for children. And though we doubt there would be any major change to its Global NCAP rating, we expect the company to test the car anyways. 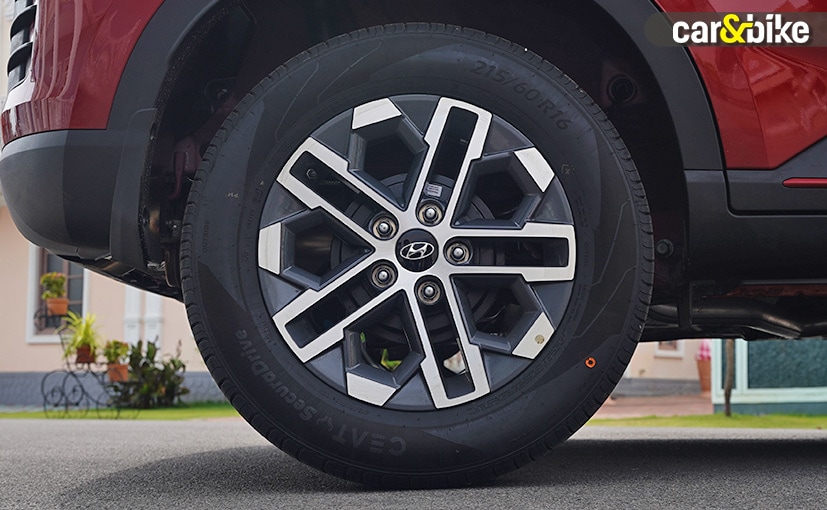 We like the alloy design on the 16-inch wheels.

The Hyundai Venue is an extremely important product for the company. It clocks more than 44 per cent of overall SUV sales and contributes to 22 per cent of the company’s overall domestic sales, more than any other SUV in its portfolio, and now with the 2022 model, the company hopes to increase this.

The Hyundai Venue undercuts Tata Nexon by ₹ 1,000 and Maruti Suzuki Vitara Brezza by ₹ 31,000, but that would soon change with the new-generation Maruti Suzuki Brezza that is expected to bring in a layer of depth to the segment leader. And we can not forget its Korean sibling, as the Kia Sonet is expected to get its own set of upgrades most likely early next year. 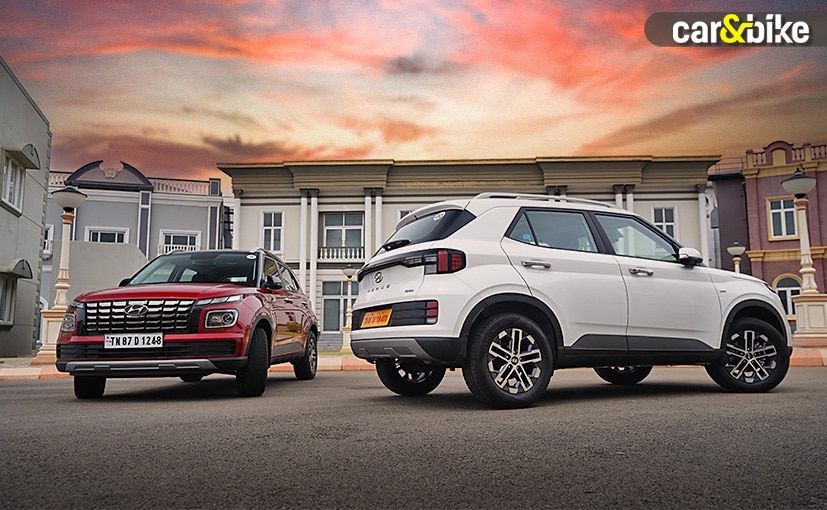 The 2022 Hyundai Venue facelift is a well-designed, smart urban SUV that ticks many boxes and offers great value.

Overall, the Hyundai Venue is a well-designed, smart urban SUV that ticks many boxes and offers great value. The prices are very attractive and that also helps explain the 21,000 bookings Hyundai received since opening bookings for the car. Its lack of enough options could be its only Achilles heel since its biggest rival at present is the Tata Nexon and it comes with as many trims as Hyundai offers connected features now. Yes, it’s those many including the Dark Editions, Kaziranga Editions, and whatnot. But it is not its prices, but rather its tech benchmarks, modern styling and build quality, decent ride and handling, comfort, and drivetrain options, that make the 2022 Hyundai Venue comes across as a winner.