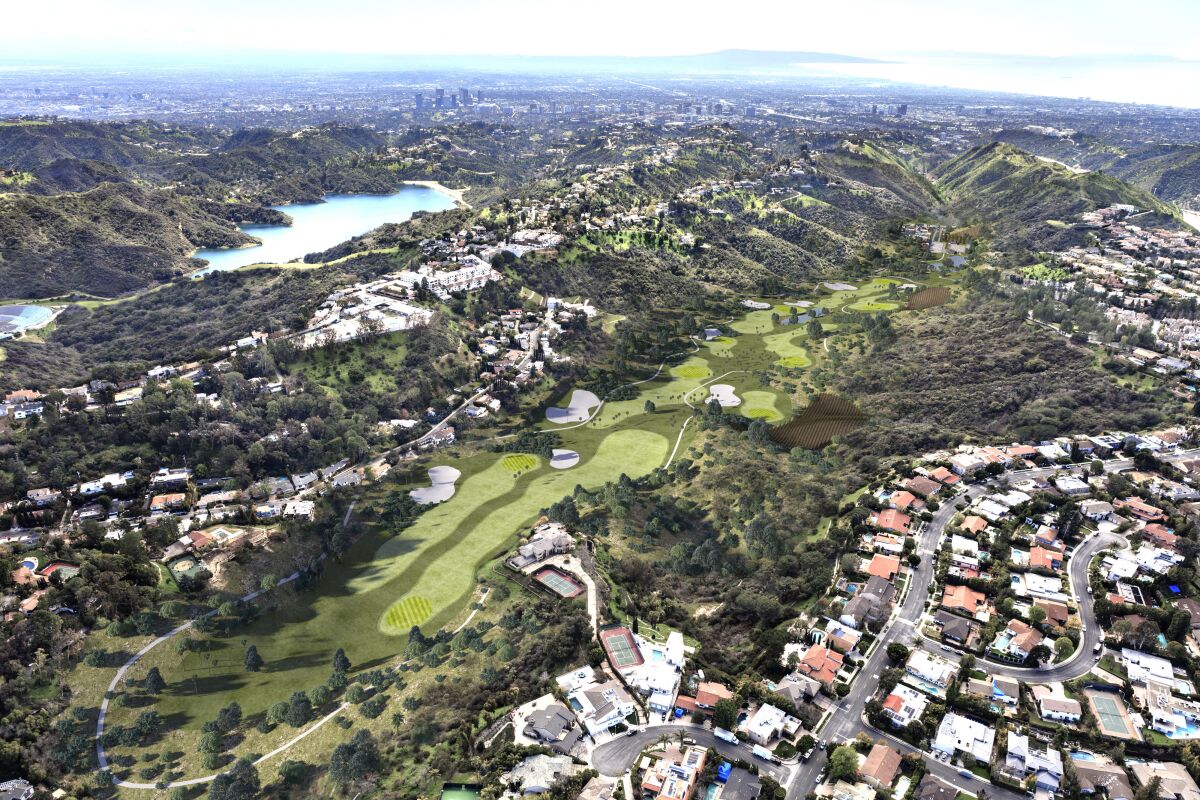 Bel-Air has earned a reputation as one of the poshest enclaves in the country thanks to its impressive celebrity roster and impressive collection of record-breaking mega-mansions.

A 260-acre estate covering 6% of the famed neighborhood will be auctioned off to the highest bidder.

The auction is a last-ditch effort to sell the huge spread known as Senderos Canyon, one of the largest and most valuable stretches of undeveloped land in the LA region, but which hasn’t found a buyer since it came on the market a decade ago .

At 260 acres, it’s three times the size of Disneyland and easily dwarfs the 157-acre mountain in Beverly Hills, widely regarded as the most beautiful undeveloped lot left in LA. second place belongs to a 53-acre property in Granada Hills asking for $1.2 million.

Despite the colossal scale, potential buyers were scarce due to the high cost and time it would take to develop the property into something profitable.

Consisting of three contiguous lots, the trophy property first came up for sale for $125 million in 2013. No buyers. In 2019, the price was reduced to $75 million, then $60 million. Still nothing. Now it’s up for auction with bids starting at $39 million, which equates to a discount of almost 70%.

Numerous ideas for the building have emerged over the years. The land is unentitled, so it’s not yet earmarked for any specific use, but potential buyers have pitched just about anything: a goat farm, retirement home, luxury wellness retreat, or even an outdoor school campus.

Renderings show possible uses for the valued acreage. One shows a golf course. Another shows a horse ranch surrounded by an artificial lake.

A more realistic vision for the land might be a handful of luxury homes, and Tamkin estimates Senderos Canyon could contain about 17. canyon would be more difficult, requiring significantly more infrastructure and slopes.

The auction is being held by Paramount Realty USA, which has handled more than $2 billion worth of real estate auctions. Misha Haghani, the company’s owner, called the property “unique and irreplaceable.”

The bidding started on January 24 and will run until March 15 – a strategic date for the owner. About two weeks later, Measure ULA goes into effect, adding 5.5% transfer tax to the deal, assuming it sells for more than $10 million.

If it sells for $39 million, the seller — a public company called Giro Properties — would owe $2.145 million under taxes. To speed things up, the seller is offering a $2 million credit if the buyer closes before the measure goes into effect on April 1.

It is the latest example of luxury property owners seeking ways to evade the tax. Some are just trying to sell properties for April, while others are getting more creative by looking at breaking up properties to lower their value below $5 million — the price point at which a 4% tax is triggered.

Auctions are usually viewed as a last resort for selling a home and usually do not take place until a property has been on the market for several years.

In 2021, the Hearst estate in Beverly Hills was auctioned for $63.1 million after originally being put on the market for $195 million. Last year, a 105,000-square-foot mega-mansion known as the One sold to the highest bidder for $141 million — an all-time record for a home at auction, but a far cry from its original asking price of $295 million.

4 Prime Suspects in U.S. Custody of the Assassination of the President of Haiti