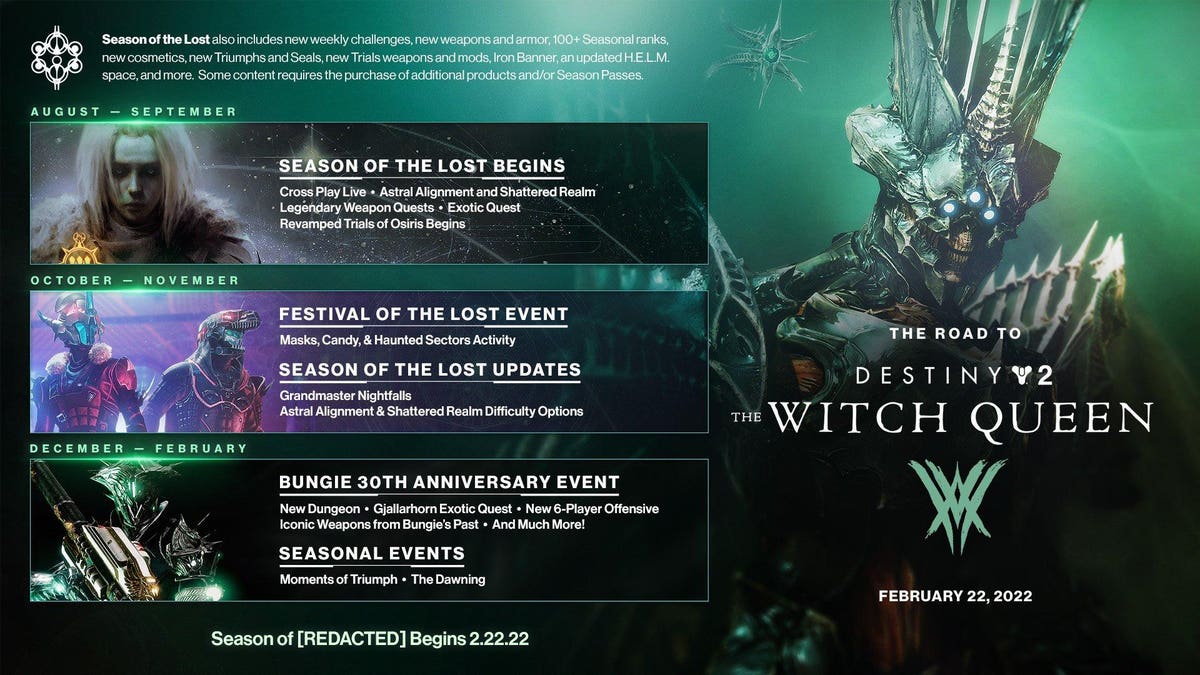 Destiny 2 is currently in a six month season, Season of the Lost, and unlike previous seasons, has only given us a “timeline” with vague approximations of when certain events will occur, as opposed to specific dates.

Well, I figured we did at least know some information to try and fill in a few blanks here, based on what we currently know about this season, the upcoming anniversary, and past events in previous years.

So here’s my attempt to make a lost season roadmap with more real dates attached to it. I will update this as time goes by with more information or clues we have.

Tuesday September 21 – Frequency echo compass upgrade. This will allow us to find new “hidden caches of awakened knowledge” in the Shattered Realm. We should also be able to reach Compass Rank 15 this week, unlocking the latest new mod that’s rotating every week.

Tuesday, September 28 – Improved astral harmonization. This extends the duration of Safe Passage, which is necessary for some of the more difficult secrets. This is the last Compass upgrade and will take us to step 41 of 53 of the Wayfinder Journey Story quest.

Tuesday, October 5 – The great masters are online. I didn’t know it until now, but I’m told it tells you that in the game. We’re applying the “knockout” system here so you can’t just grow easy produce anymore.

Tuesday 12 October – Feast of the lost. That’s my best guess as to when the Festival of the Lost begins, given the Eververse store’s directions. It started on October 6 of last year, so my original guess was October 5, but Eververse says otherwise. It should last around November 9. We get new haunted sectors, replacing the haunted forest that was vaulted. And dinosaur armor. The Wayfinder Voyager quest will continue here.

Also on Tuesday, October 12 – Is the Wayfinder Journey Story quest complete? I’m not sure if after the compass is finished we’ll have another two or three weeks, but if it’s two, that’s when the quest will end and we’ll have enough Techeuns to take out the worm. from Savathun. If it’s not this week, it would be next. I don’t believe the entire season’s story will be over with this singular quest complete, with Savathun bursting out and the story ending until the events of the Witch Queen, but at the very least, this first phase should be completed.

Tuesday 19 October – Astral Alignment and Shattered Realm difficulty options? This is supposed to happen sometime in this window, and it would make sense to me that once the Wayfinder quest is complete, the new difficulty options show up. We don’t know the rewards for these, but I’m assuming something like high stat armor or multi-benefit weapons, similar to Splicer last season.

Tuesday, December 7 – Anniversary event. I’m skipping here because I can’t predict the exact date of the difficulty options. The anniversary event contains a free component, including a new 6-player activity and rewards from previous Bungie games, as well as a paid component with the Loot Cave dungeon and the return of Gjallarhorn. It is not known if all of this will be rolled out at the same time or if it will be phased in. I guess it can be staggered at least a bit, but we’ll see. Either way, this is certainly the biggest “mid-season” date, and one that I would expect updates to happen, like the previously announced transmog bounty reset.

Tuesday 14 December – Dawn. It started on December 15th of last year, and I doubt they’ll launch it on the same day as the Anniversary, so here we are. If it is reflected last time, it should end on Tuesday, January 4.

Moments of triumph? – It’s a question mark, given that it was once set alongside Solstice of Heroes. Considering that this is a large collection of things that you are supposed to have done in the past year, we usually have a lot of time to do this, so I would say most of January and February seem likely for when this will be underway. Maybe right at the end of Dawning, maybe he rides into December, I don’t know.

I also can’t plan each Iron Banner week, or predict things like surprise story quest developments. Suffice to say no, I don’t think the seasonal story ends in mid-October, and there will be plenty more to come in the months ahead.

But I think most of these days will be on point or near right so hopefully this helps you plan for the season ahead a bit. Stay tuned for more updates.