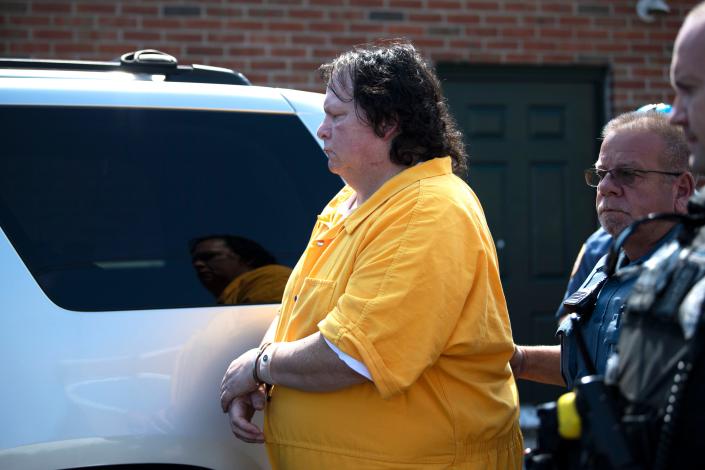 More than three decades ago, Robert Atkins came back to his Bristol Township home, “covered in blood,” and told his wife he stabbed someone and set a house on fire.

April Atkins, on the stand in a Bucks County courtroom Wednesday, testified that her then-husband made his family drop everything and go to the Poconos. “He was pretty much a mess,” she said.

Robert Atkins then tapped on his pocket, indicating that he had a pocket knife on him, she said. April Atkins said it was a way to “keep her in line.”

Scared of what he would do to her, it would be another 25 years before April Atkins would show up to the Bristol Township police station and implicate her husband in the murder of Joy Hibbs, a 35-year-old mother of two from the township’s Croydon section, according to testimony.

“I went into there to do the right thing,” she said in court.

It would be another six years before Robert Atkins, a former Bristol Township confidential police informant, was charged. County Detectives, now with April Atkins’ statement in their investigative files, charged her ex-husband with stabbing and strangling Hibbs in her Spencer Drive home before it was set on fire on April 19, 1991.

On Wednesday, following Robert Atkins’ preliminary hearing, District Judge Frank Peranteau Sr. held all charges against him, including first- and second-degree murder, arson, burglary and robbery. The case now heads to trial in the Bucks County Court of Common Pleas.

David Hibbs called himself a “quintessential momma’s boy” who spent a lot of his time with his mother. He knew that his parents smoked marijuana, and he said that his mother told him so. He also knew they purchased marijuana from Robert Atkins.

In the weeks prior to his mother’s death, he recalled Joy Hibbs talking on the phone with Robert Atkins while she was in the kitchen. The Atkins were former neighbors, and he knew Joy Hibbs was friends with April Atkins.

There was a discussion over the quality of the marijuana she had recently purchased from him, and that Joy Hibbs was not satisfied and wanted her money back from him.

“I remember hearing him say, ‘I will f−ing kill you and blow up your house,'” David Hibbs testified.

His mother was “shook,” but David Hibbs said he was not sure if she took the threat seriously. He said she told him Robert Atkins had also called her and threatened her at the doctor’s office where she worked.

In the weeks leading up to her death, someone slashed the tires of her car. Additionally, someone had kicked in the back door to their home.

David Hibbs said his mother never told his father, Charlie Hibbs, about the threats. She was afraid if she told her husband, who was fiercely loyal to the family, that things would “escalate.”

Initially, he thought the fire started from his mother trying to cook something. He opened the back door to the home and found the gas burners on and ceiling tiles falling from the kitchen, which had flames coming from it. David Hibbs ran outside and yelled for a neighbor to help. He also saw his mother’s car, still in the driveway.

“I tried to get back in the house because I wanted to save my mom,” he said. Neighbors held him down to stop him from going back in.

He was placed in an ambulance for safety. David Hibbs called it an “out of body experience” and said it felt like “forever” while he waited in the back of the ambulance.

“I just felt like I was trapped,” he said on the stand Wednesday. Eventually, ambulance personnel told him his mother had died.

David Hibbs found out that his mother’s body had been discovered in his room. He tried to think of what may have been on fire in his room that could have caused the blaze. He was “tormented” by that information until two days later, when investigators informed the family that Joy Hibbs had been murdered.

County Detective Hanks testified that evidence showed Joy Hibbs had gone grocery shopping earlier that morning, and had a visit from two representatives from a Bensalem church, where the family had recently gone to an Easter service. They left her home by 11:45 a.m.

The fire had started sometime before 12:54 p.m. A clock in David Hibbs’ room stopped at that time, indicating the fire was strong enough by then to cause the clock to stop working, according to Hanks.

A fire marshal determined the fire was set in David Hibbs’ room, as well on the burners and a waste basket nearby in the kitchen.

Neighbors told authorities that a blue Monte Carlo vehicle was seen parked “haphazardly” in front of Joy Hibbs’ home before the fire, Hanks said. David Hibbs testified that he knew Robert Atkins had a Monte Carlo, and had seen him with the vehicle at one point before his mother’s death.

David Hibbs recalled telling police about the car and that Robert Atkins had threatened his mother, he said. That was before he knew his mother had been murdered.

“As clearly as I am telling you today, yes,” David Hibbs told First Assistant District Attorney Jennifer Schorn of his report to police back in 1991.

Investigation timeline:‘Living on borrowed time:’ A timeline of the investigation in the Joy Hibbs murder in Croydon

April Atkins testified that she was supposed to work a night shift at Woods Services, a support facility for those with disabilities, the day Joy Hibbs died. Robert Atkins came home that afternoon, “covered in blood,” and told her they were going to the Poconos, she testified.

April Atkins got her children, ages 1 and 4, packed up for the trip, called out of work and let her co-worker, who she often carpooled with, know she wouldn’t be in work for the weekend. She said Robert Atkins was driving aggressively on the way to the Poconos, where they stayed at a hotel she had not been to before.

“This was the scariest travel I’ve ever done,” she said.

Her husband made her put the room in her name. They spent that night there, and the next morning she woke up and saw Robert Atkins with new shoes on, and a bag of unknown items. April Atkins said he made them go behind the hotel, and he walked into a wooded area, alone, with that bag. When he returned, he no longer had it.

On April 21, 1991, Bristol Township Detective Al Eastlack visited the Atkins home after they returned from their trip. April Atkins testified that she did not listen to a lot of what was said to her husband, who would later be revealed as a confidential informant for the department.

She said she did , however, learn that Joy Hibbs had been killed.

“I kept my mouth closed,” she said.

Hanks testified that there was no record of the April 21, 1991 meeting with Robert Atkins. That, he said, is not typical of policing.

“It’s not great policing,” he said. “Probably not then and not now.”

Robert Atkins would be interviewed on April 24, 1991, but no arrest was made. He admitted to selling the Hibbs marijuana, but said he had not seen them since December 1990. He told them he had gone to the Poconos that weekend.

Two months later, Robert Atkins told police that his wife’s co-worker, who April Atkins had contacted before they went on their trip, could verify that he was home when Joy Hibbs was killed. An officer contacted her, and confirmed that was the case.

That co-worker was recently interviewed, and could not recall the interaction with police, according to Hanks. She remembered April Atkins calling her between 1 and 1:30 p.m. that day. The county detective said the Atkins lived about 15 minutes from the Hibbs at that time, and that the fire started before 1 p.m.

“It really doesn’t affect the timeline one way or the other,” he testified.

Robert Atkins said he had memory issues because of a concussion, but admitted to being a police informant and owning a Monte Carlo at the time of the murder, according to Hanks. He told Slaughter he sold marijuana to Joy and Charlie Hibbs.

April Atkins testified that her ex-husband contacted her before her 2014 interview, and told her what to say to police. The two had divorced in 2006.

“I said everything Bob told me, and that was the end of the conversation,” she said.

Two years later, she went back to Bristol Township police and implicated him in the murder, she said.

At the end of 2021, Hanks supervised intercepted phone calls between April Atkins and her ex-husband. She led Robert Atkins to believe that she had told her roommate about Atkins’ confession to her in 1991, and that police were questioning them about it.

During the hearing Wednesday, Schorn played recordings of the phone calls between April and Robert Atkins.

In the first call, Robert Atkins tells his ex-wife that she has said enough, and does not need to talk to police about the case anymore.

Later, she would text Robert Atkins that she told her roommate about the “knife and fire,” according to Hanks. In another call, he appeared calmer when speaking to her.

“I don’t know what to tell you because I don’t know what you’re talking about,” Robert Atkins tells his ex-wife. He said multiple times on that call that he could not be in “two places at the same time.”

“You do realize your phone is probably tapped, yeah?” he asked her.

Hanks said in February, Robert Atkins sent his ex-wife a message with a screenshot of her roommate’s Facebook account, saying “You better choose your friends better.”

Robert Atkins’ son, who lived with him, testified to the grand jury that his father told him he “may have been involved,” in the Hibbs murder after he spoke to his ex-wife late last year, according to Hanks.

Craig Penglase, Robert Atkins’ attorney, did not have any witnesses, nor did he have any argument at the end of Wednesday’s hearing. He did not respond to a message seeking comment later that day.

Robert Atkins is scheduled to be formally arraigned on the charges on Oct. 21. He remains in police custody.