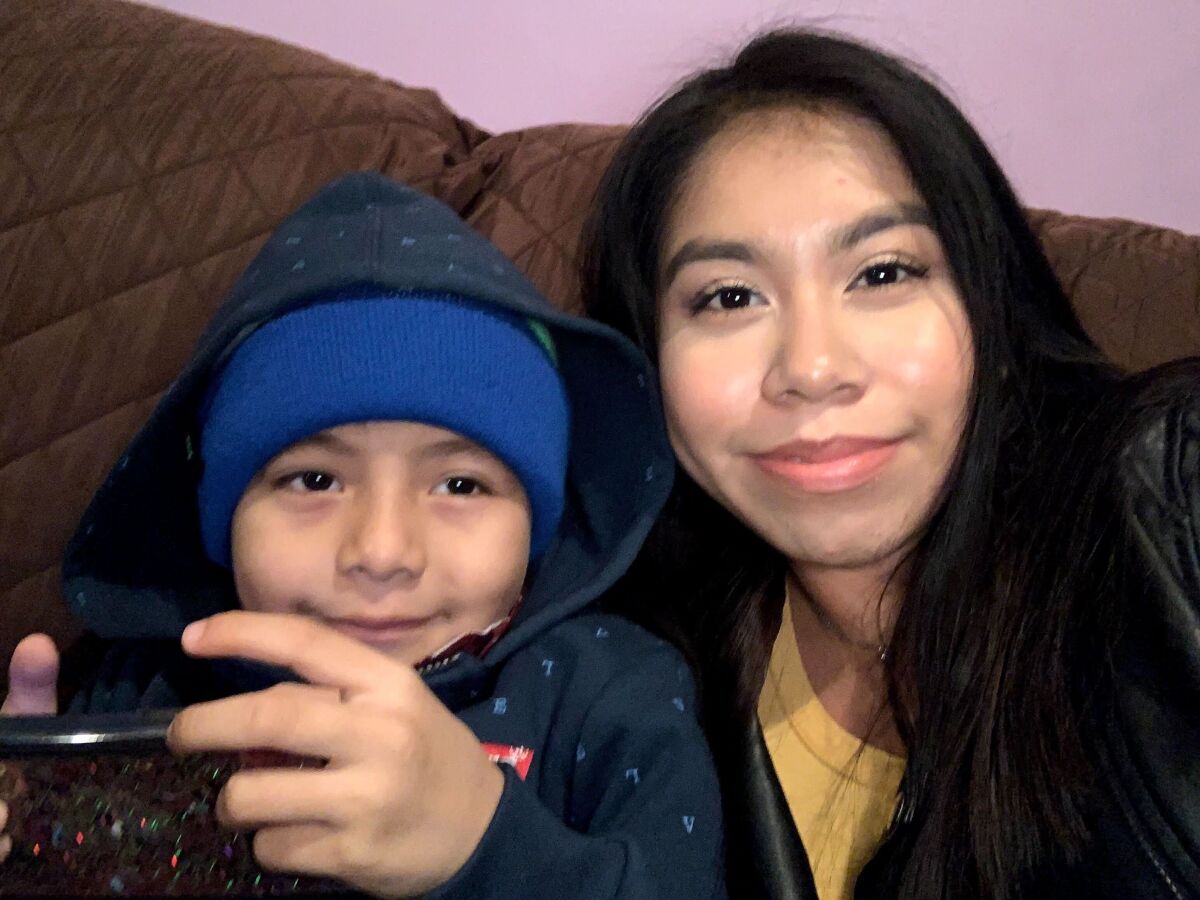 There will be an empty chair at a Koreatown family’s Thanksgiving dinner Thursday night.

Normally, Brayden Medina’s extended family gathers at his aunt and uncle’s house nearby to celebrate the holiday. But this year, the 9-year-old will spend Thanksgiving in a hospital bed, recovering from a stab wound that affected his ability to walk.

Just over a week ago, the boy was shopping with his mother at a Target store in downtown Los Angeles when — in an unprovoked attack — a man confronted Brayden, telling him he was going to stab and kill him. The boy tried to run but was stabbed in the back.

According to the Los Angeles Police Department, the assailant, whose identity has not been released, then stabbed a young woman in the chest. When the suspect, whom police believe was homeless, attempted to stab a security officer, the officer shot and killed him.

Since that day, Brayden has been recovering in a Los Angeles hospital. Brayden’s parents have not publicly discussed the attack and its effect on their family, requesting that the name of the hospital where Brayden is being treated not be disclosed for privacy reasons.

After the attack, Jessi, Brayden’s older brother, said their mother tried to act “strong and brave” to “not let me see that she was sad and in pain”. His parents tried to comfort him. But he knew.

When he first spoke to his little brother over the phone, the 14-year-old said, he tried to distract Brayden from the terrifying attack.

“But out of nowhere he became sad. He said, ‘Jessi, they stabbed me in the back,’ and then he got really sad and started crying,” Jessi recalls. “Honestly, I kind of lost it.”

The brothers cried together.

“This is like a life scar,” said Brayden’s cousin Lizzette Molina. “What he went through will stay with him for the rest of his life.”

The 24-year-old woman who was stabbed in the chest is still recovering in the hospital, LAPD Chief Michel Moore said. Last week she was listed as critical but stable.

Because Brayden’s injuries were so severe, Molina said, only his parents could visit.

“We just want to see him,” said 20-year-old Molina just days before Thanksgiving. “That’s all we want.”

On November 15, Brayden and his mother had taken a bus from their home in Koreatown to the Target location at 7th and Figueroa streets in the FIGat7th mall. Brayden had wanted to buy Game of Life for a long time, but his parents were busy working, his mother as a hotel housekeeper and his father in a kitchen preparing food.

Finally, on that crisp, clear Tuesday, their mom had time to take Brayden to the store to find the game, Jessi said.

While Brayden and his mother were shopping that night, a man in his forties entered the store unarmed and went into the kitchenware section. There he unpacked a large butcher knife, Moore said in an interview.

Brayden was walking alone at the time, making his way to his mother at the checkout so they could pay for their purchases. The board game was already in the family’s shopping cart.

It was then that the knife-wielding man confronted the 9-year-old.

The suspect repeatedly told Brayden he would stab and kill him, Moore said at a press conference after the attack. The boy tried to get to safety, but the man “without further provocation suddenly attacked and stabbed this young child … causing it to fall to the ground,” Moore said.

The attack left a deep laceration on Brayden’s left shoulder. A 26-year-old woman tried to help and was slightly injured, police said.

The suspect walked away and then “brutally stabbed the 24-year-old in the chest,” Moore said. Good Samaritans came to her aid, he said, and pulled her to a nearby pharmacy “to make sure the attack wouldn’t continue.”

The attacker then moved to the front of the store, where he was confronted by an armed security officer, the chief said. The security officer opened fire at least once, hitting the man in the abdomen with the knife.

He was later pronounced dead at a hospital.

“I’m grateful to Target security for their uniformed officer who was there,” Moore told The Times. “It was that uniformed, armed guard that was there that stepped in and stopped this deadly attack.”

As a result of the attack, Moore said, the LAPD accelerated the start of its holiday deployment plan, increasing the number of uniformed officers in malls and other places frequented during the season.

Moore said police continued to investigate the attacker’s background, saying he had “minimal arrest history.” Police found an address for him in the San Fernando area, but believe he hadn’t lived there for some time.

The chief added that police have been unable to identify any previous involvement of the suspect with mental health professionals or treatment, “or what might explain this vicious attack.”

He said he is hopeful that Brayden and the 24-year-old can leave the hospital “and make a full recovery”.

Molina said they don’t know how long Brayden will be in the hospital. He has started physical therapy and the doctors continued to run tests on him this week.

“They still haven’t confirmed to us what the long-term effects are and what he’s going to be like in the future,” Molina said. “I don’t know how long it will take for my nephew to heal, but we will all be there for him.”

The youngest of three boys, Brayden is “definitely the baby in our family,” Molina said. She described him as energetic, adventurous and caring.

She remembered the last weekend she came home from UC Riverside, feeling down, and her little cousin trying to cheer her up. He told her to hit a balloon they had around the house to make her feel better. To distract her, he suggested watching a movie.

When Molina learned what happened to her cousin, she said she felt “heartbroken.”

“It absolutely pained me to hear that my baby, my cousin who I love so much, had to go through this very horrible experience,” she said. “I came home as soon as possible.”

To try and help her family, Molina set up a GoFundMe page, which has raised over $36,000. Molina expects it to help a lot since both her aunt and uncle have taken time off work to be with Brayden.

Her uncle will likely return to work soon because “our circumstances don’t allow them the luxury of going on vacation,” Molina said.

She added that the family is grateful and overwhelmed by the amount of support she has received. She had not expected to raise so much money in such a short time, she said.

“[Brayden] knew the world wasn’t that good even before he got hurt,” Molina said. “He already knows that there is a lot of evil in the world, but I hope with this GoFundMe page he can see and realize that while the world is bad, there are good people out there.”