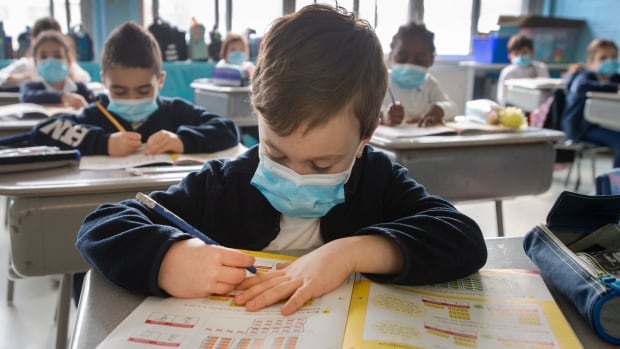 No school or kindergarten in Alberta can require students to wear a mask to go to school, a new ordinance from the provincial government says.

The rules, which go into effect today, also prevent nearly every school in Alberta from shifting classes from grade 1 to grade 12 to an online-only format.

Nursery and kindergarten classes are excluded, and schools in sensitive environments such as hospitals may be exempted from the rules.

“Parents and students have told me time and time again that they want a normal school environment for their children,” Prime Minister Danielle Smith said in a press release on Thursday.

The statement said the government is concerned about the mental health impact of children missing face-to-face classes during the pandemic. It also says some children have struggled with online learning over the past three years, and that an in-person option should help children keep up with their academic skills.

The press release states that schools and school boards are seeking clarity on what public health measures they might consider.

The change comes as children’s hospitals and schools grapple with a surge in sick children and teens.

Doctors say pediatric emergency rooms across the country are inundated with children turning up with respiratory and gastrointestinal infections.

Public health doctors have said flu, respiratory syncytial virus (RSV) and COVID-19 are leading to a triple whammy of health challenges for children.

Last February, the Alberta government lifted mask mandates in schools. The families of five immunocompromised children and the Alberta Federation of Labor subsequently challenged that government decision in court.

In October, a Court of King’s Bench judge ruled that the government’s demand to end mask mandates was “unreasonable” because the decision was made by the cabinet and not the Chief Medical Officer of Health, who has that power at under the Public Health Act.

The judge also found that Secretary of Education Adriana LaGrange had not taken the legal action necessary to prevent school mask mandates.

At the time, Smith said the government was looking at legal avenues to address this.

Smith campaigned for the leadership of the United Conservative Party promising that children would never again have to wear a mask in school.