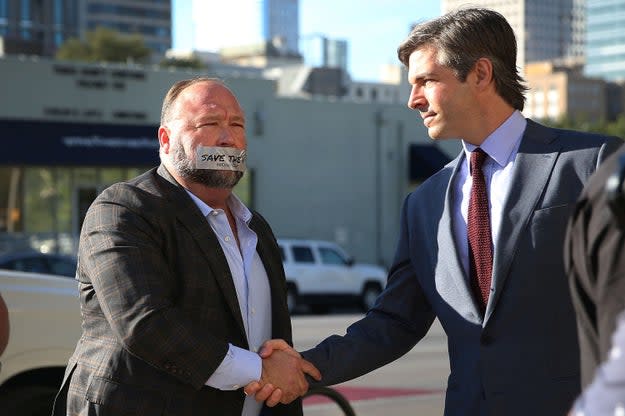 Infowars presenter Alex Jones was forced to answer for his years of spreading conspiracy theories when he took a stand this week in a lawsuit for defamation damages brought against him by the parents of a 6-year-old child killed in the mass shooting. at Sandy Hook Elementary School. The jury spent less than a day deliberating the case and awarded more than $4 million dollars in damages. Tomorrow, the trial will move on to the penalty phase, with possible further awards.

In the wake of the tragedy, Jones misled his audience of millions by telling them that the December 14, 2012 massacre, which killed 20 children and six adult staff members, was an elaborate hoax perpetrated by the government to undermine gun ownership rights. For years he claimed that “crisis actors” staged the attack. In 2018, multiple families of Sandy Hook victims and an FBI agent responding to the crime scene filed defamation charges against Jones and Infowars, alleging that his lies made them the target of harassment and violent threats.

On October 1, 2021, a Texas judge found Jones default liable for damages in three of these defamation lawsuits after the Infowars host failed to hand over the documents to the families’ attorneys. The lawsuit to determine damages in the first of these lawsuits he lost, filed by Neil Heslin and Scarlett Lewis, parents of victim Jesse Lewis, began on July 26. They demand $150 million. Lewis addressed Jones directly in court before the conspiracy theorist took the stand.

In his testimony on Tuesday and Wednesday, a visibly uncomfortable and sweaty Jones was repeatedly admonished by Judge Maya Guerra Gamble and brutally interrogated by parental attorney Mark Bankston. The Infowars host was confronted not only with his previous statements about the Sandy Hook shooting, but also with comments he made earlier this week about the judge, jury and trial on his show.

Livestream clips of the trial have been viewed millions of times on social media. Here are some of the most shared moments.

When the judge told him to stop lying under oath, saying he’s already lied twice:

Judge Gamble sent the jury out of the room at one point on Tuesday to reprimand Jones for telling the court that he and his attorneys had provided prosecutors with information ahead of the trial (he didn’t; that’s why he lost in a default judgment) . She also scolded him for claiming to be bankrupt (he’s not; Infowars has filed for bankruptcy). “It seems absurd to tell you again to tell the truth while you testify, but here I am again,” she said. “This is not your show.”

When he tried to sell the judges some of his Infowars supplements:

I mean, there’s really no explanation for this one.

When the family’s attorney revealed that Jones’ attorneys accidentally sent him a digital copy of Jones’ phone:

During his cross-examination, Bankston told Jones that his lawyers accidentally sent him the contents of Jones’ cell phone, which contained previously undisclosed text about the shooting and financial information about Infowars. Bankston noted that these texts contradicted Jones’ earlier sworn testimony that he had searched the phone for text messages about Sandy Hook and could not find them.

When the judge had to explain what hearsay is:

“Things you’ve read are also hearsay, because you didn’t say them, someone else said them,” Gamble said. “Don’t tell the jury that comes from anyone else.”

When he finally admitted that the Sandy Hook shooting was 100% real:

Jones agreed when asked if he understood it was “absolutely irresponsible” for him to push the conspiracy theory that the Sandy Hook shooting was staged. “It was. Especially since I met the parents. It’s 100% real,” he said. He then complained that the media “won’t let me take it back. They just want to put me in the position of being the Sandy Hook guy.”

When the family’s attorney pointed out that Jones only coughed in court, not on his show:

Jones, who claimed in court he has laryngitis and a ruptured larynx, said he has a “cough button” he can step on during his show that dampens his cough.

When he had to clarify that he doesn’t think the jurors are false flag agents:

I wonder how many times judges have to ask someone on the witness stand to confirm that a jury “consists of 16 intelligent, honest citizens who are not improperly influenced in any way”.

When the judge told him to stop chewing gum and he said he was “massage” the hole in his mouth where a tooth had been pulled:

Gamble had to repeatedly tell Jones she didn’t want to see the inside of his mouth.

When faced with things that have been said about the judge in recent Infowars shows, Alex Jones:

There’s a lot going on here.

When Jones denied the family’s attorney that he and his company “want the world to believe” that his trial has been rigged and the judge follows a script… only to see a recent Infowars clip of a host who exactly that says:

When Scarlett Lewis, mother of Sandy Hook victim Jesse Lewis, asked Jones if he thought she was an actor during her testimony:

Jones replied that he didn’t (which he wasn’t technically allowed to do).

When Lewis spoke directly to Jones at the most powerful moment of the trial: