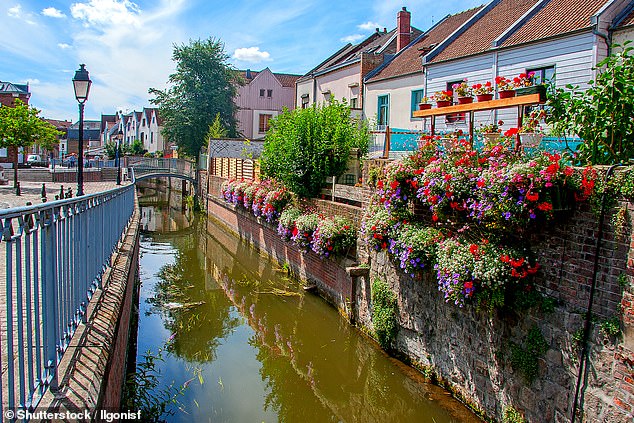 It has its own Notre Dame cathedral – bigger than the one in the capital – and its own macarons.

They were invented nearly 150 years ago by the Trogneux family, of which the First Lady of France is a descendant. Brigitte (née Trogneux) and husband Emmanuel Macron are from this town.

The warren of cobbled streets, large squares and canals have been tastefully restored (after World War II destruction) and are a joy to explore.

Art is big in this very stylish hotel close to the station. Bedrooms have murals by French author Jules Verne (another famous Amienois) and soap dispensers are labeled ‘Busy to Impress’. 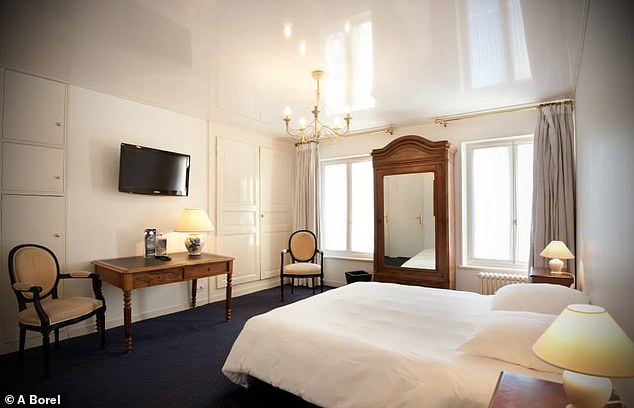 Check into a bargain room at Le Prieure, a former 17th-century priory that exudes rustic charm 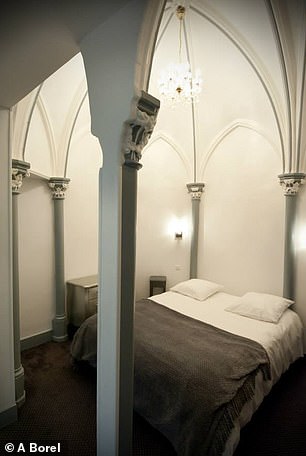 For rustic French charm, this former 17th-century priory can’t be beaten. The hotel restaurant and some of the 23 rooms (spread over two buildings) are located on a narrow cobbled street near the cathedral and have a view of the spire.

There are no elevators, so ask for a ground floor room if you don’t feel like walking stairs. Prices start from £66, and breakfast is £10.50 pp (hotel-prieure-amiens.com).

With giant teddy bears, board games and books scattered throughout the cozy sofa-strewn ground floor, this grand hotel in the center of Amiens is all about fun.

The 109 softly lit, newly refurbished rooms cost from £72 (marriott.co.uk) and the luxurious beds are topped with decorative pillows. There are no closets, just hangers on wall-mounted hooks, so pack light.

What this 88-room hotel lacks in style and centrality (it’s a 15-minute walk to the cathedral) it makes up for in price. Doubles start at £52, while triples are priced the same as twins (accor.com). The rooms are bright, clean and simple, with nice reading lights. Breakfast costs £6 pp

WHAT TO SEE AND DO

Our Lady of Amiens

This Gothic cathedral from the 13th century is the largest in France. Admission is free, or opt for a £3 pp self-guided audio tour. The high arches, the marble baroque pulpit and the stained glass roses are amazing. 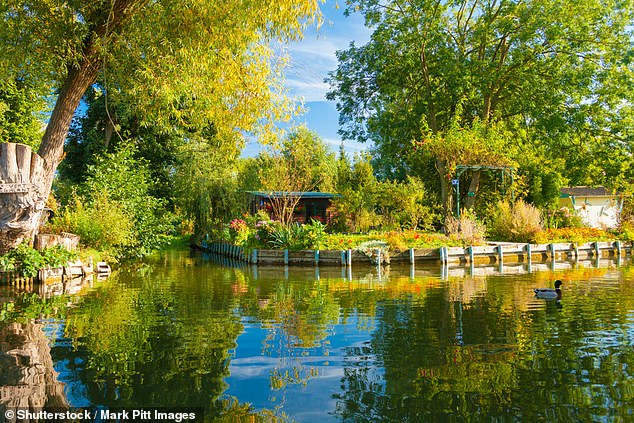 One of the floating garden islands ‘Les Hortillonnages’, which can be explored on foot from Ile aux Fagots or in a boat 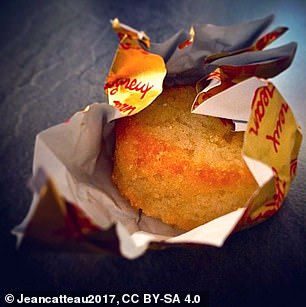 Sample one of the city’s award-winning macarons (above) at café Jean Trogneux. Image courtesy of Creative Commons

Imagine a Chelsea Flower Show on the water. That’s what you’ll find on the canals of Amiens, home to floating garden islands called Les Hortillonnages. They can be explored on foot from Ile aux Fagots or in a boat. You can hire a wooden electric craft at 35, Rue Roger Allou (artetjardins-hdf.com) for £18 per hour. Have fun.

See also  Suicides in Japan to increase in 2022, with first rise among men in 13 years

You can’t leave without trying one of the city’s award-winning macarons, less than £1 each. They are served in the café Jean Trogneux near the cathedral which is run by the fifth generation of the family. They’re best enjoyed with a cup of 70 percent cocoa “caraque chocolat”—a thick, hot molten chocolate drink so divine you won’t want it to end.

The Saturday market forms the contours of the canal below the cathedral. Stalls sell everything from saucissons to fruit and vegetables grown on Les Hortillonnages. Head to the indoor Belfry market if you’re a cheese lover (closed Mondays) and check out the Planchon stall. with its northern French fromages. 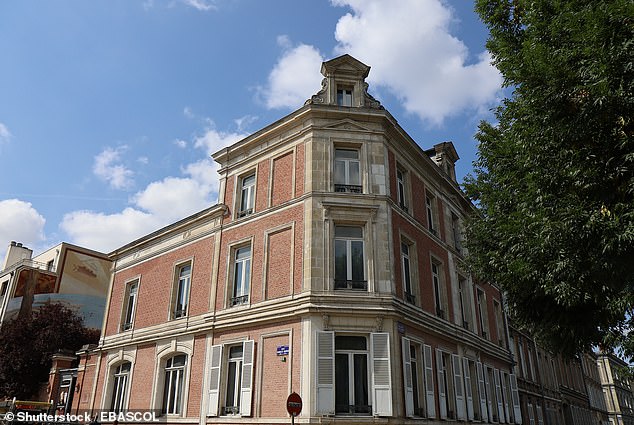 Try a Jules Verne-themed walking tour, stopping at the Around The World In 80 Days author’s house (pictured) along the way

Jules Verne, author of Around the World in 80 Days, is to Amiens what Gaudi is to Barcelona. Verne lived and wrote here for 30 years and a new free 2.4km Verne themed self guided walking tour (map from the tourist office) will take you to the places he knew. You will find an information board at each of the 16 landmarks. A few stops (Verne’s house and the Picardy museum) are worth a visit in themselves. 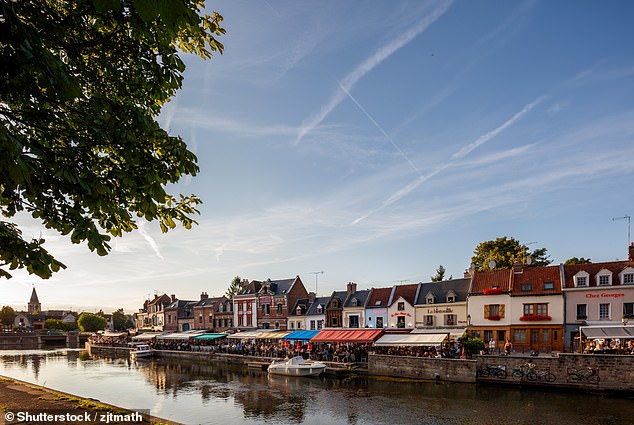 Located in the trendy Saint-Leu district, this bustling waterfront restaurant (restaurant-lequai.fr) is known for its regional Picardy cuisine.

Favorites include ficelle Picarde (savory stuffed crepes in cream sauce) for £9 and pork cheek pork loin slow cooked in beer for £16. Light fare isn’t either, and the calories are best ignored.

A checkered floor and fairy lights add character to this popular, largely vegetarian and vegan eatery (robinroomamiens.com) close to the city’s belfry.

It’s the perfect pit stop for lunch, and £11 buys you a huge plate of salad, homemade soup and a pie. If you have room left, the dessert menu is tempting.

Enjoy the theater of the open kitchen at this restaurant (aildesours-restaurant.fr), recommended by the Michelin Guide, which serves two set dinner menus – £38 for four courses; £48 for six.

The products are seasonal, local and creative (think mussels with marigolds and hake with coconut-vanilla sauce). 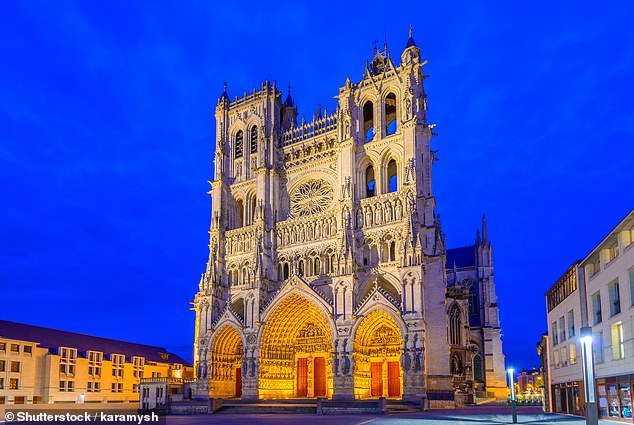 A ‘pichet’ of house red costs just £6 at La Table Saint Firmin, a short walk from Notre-Dame d’Amiens Cathedral (above)

For a budget-friendly French meal a stone’s throw from the cathedral, look no further (la-table-saint-firmin-amiens.eatbu.com). Starters and desserts cost around £6, mains £12, and portions are generous.

Wash down the goats cheese salad and sirloin steak (premium cut of steak) with a £6 ‘pichet’ of house red, then pay at the till. It is open daily for lunch and Friday and Saturday for dinner.

Amiens is less than 100 miles from both Paris and Lille and can be reached from either. Eurostar (eurostar.com) has returns from London to Paris or Lille from £78.

Trains to Amiens from Paris or Lille cost from £28 return (sncf-connect.com), and the journey time is around an hour.