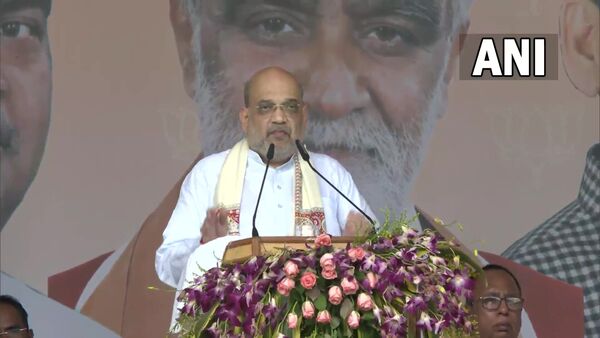 Bihar chief minister Nitish Kumar has stabbed the BJP in the back to join hands with RJD Congress in a bid to become prime minister, Union minister Amit Shah says in his forceful attack after the split of the BJP and JD(U) alliance in the state.

The interior minister’s first visit to Bihar comes after Prime Minister Nitish Kumar broke the alliance with the BJP and joined hands with RJD and Congress to form a major alliance government.

Addressing the ‘Jana Bhavna Mahasabha’ in the Purnea of ​​Bihar, Shah said: “Nitish Kumar has thrown into his lap the anti-congress politics from which he was born and sat in the lap of RJD and Congress to become the Prime Minister. become.”

“Can Nitish babu become prime minister by changing political alliances? He has betrayed many since he entered politics. Lalu ji, beware the Nitish babu will sit on the lap of Congress tomorrow and leave you behind,” he said.

He went on to say that the BJP will form a full-majority government in Bihar after the 2025 assembly elections.

“Nitish Kumar has no ideology, ‘Mahagathbandhan’ in Bihar will be routed in the 2024 Lok Sabha polls,” he said.

Shah denounced law and order in the state, saying there has been an “atmosphere of fear” in the state since Mahagathbandhan’s government returned to power.

“When I am here in border districts today, the duo of Lalu Yadav (RJD chief) and (CM) Nitish Kumar has a stomachache. Lalu Yadav and Nitish Kumar say I come to create a conflict. Lalu ji, there is no need from me to create conflict you are enough to do this you have been doing this all your life i have come here to say that when lalu has joined the government and nitish kumar is sitting on his lap there is a fear here. I have come to tell you not to be afraid. There is the government of Narendra Modi here,” he said.

Shah said the crowd that turned out at the rally is a signal of “warning to the Lalu-Nitish government”.

“There would be a start to ringing the horn of Bihar against the introduction of selfishness and power that Nitish Kumar has given by deceiving the BJP and sitting on Lalu’s lap,” he added.

Amit Shah is currently on a two-day visit to Bihar to prepare the party to become a formidable force ahead of the 2024 Lok Sabha elections and to counter the newly formed Mahagathbandhan government in the state.

(With input from ANI)

Truss: Not everyone will be ahead, but my plans will create a ‘new Britain’