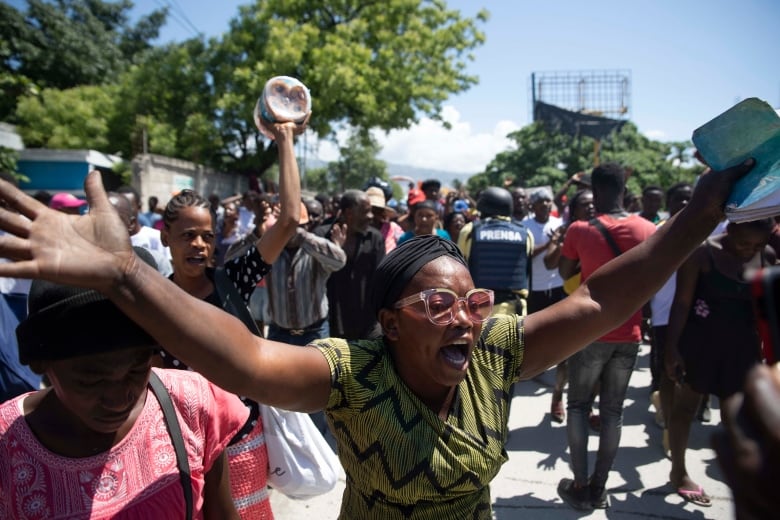 Haiti has long been swinging from crisis to crisis. But at no point in the recent past — perhaps not since the immediate aftermath of the 2010 earthquake — the country’s plight for so many of its people seemed as hopeless as it does today.

See also  Train strikes: dates for October and which lines will be affected

The Dominican Republic has deployed its military to the border with Haiti to prevent a spillover from what its president Luis Abinader calls a “low-intensity civil war.”

The gangs that claim control of as much as 60 percent of Haitian territory kill hundreds of people each month.

Canada’s ambassador to the UN, Bob Rae, recently visited the country. He told TUSEN News that he found that “the gangs have taken control of much of Port-au-Prince. The gangs even occupy the courthouse.”

Canada’s embattled diplomats in Haiti, led by Ambassador Sébastien Carrière, are taking refuge at home as it is no longer safe to travel the streets of Port-au-Prince.

“The embassy is closed to the public and we operate virtually via telecommuting, managing the current crisis and everything else,” Carrière told TUSEN News. “The streets were quiet yesterday and today, but the big question is what will happen tomorrow.”

Nobody wants to go into the swamp

Haiti was certainly a topic of discussion when world leaders gathered in New York this week for the 77th UN General Assembly. But no country showed any willingness to allocate to Haiti the kind of resources needed to restore the capital to a semblance of law and order.

And there was no sign at all that outside forces are ready to send their own people to bolster Haiti’s national police force, which is often barred by gangs.

Of Haiti’s traditional donors, only the US has given more than Canada since the Port-au-Prince earthquake.

And on Wednesday, Canada announced it would spend another $20 million to rebuild schools destroyed in the earthquake that struck Haiti’s southern peninsula last August.

Canadian presence a shadow of the past

Canada has also contributed millions of dollars this year to an effort to train and equip Haitian security forces.

“We spearheaded the creation of a $30 million UN basket fund for security and are currently funding a third of it, with more to come,” said Carrière.

But Canada’s human security presence in Haiti has dwindled to almost nothing. A country that once had more than 2,000 military personnel in its Joint Task Force Haiti, as well as about 100 police officers, now has just two RCMP officers in the entire country.

And despite foreign security funding, the gangs have been gaining ground since last year — when Haitian President Jovenel Moïse was assassinated in his own bedroom.

Moïse himself was deeply involved in the rise of gangs such as 400 Mawozo – who kidnapped a group of American and Canadian missionaries last year – and G9, led by former police officer Jimmy “Barbecue” Cherizier.

Moïse’s Tet Kale (Bald Head) party has long used gangs as enforcers and guards in poor areas of Port-au-Prince and has enabled them to collect arsenals of smuggled weapons.

Many Haitians reject the claim that a control struggle is underway between the government and the gangs. Instead, they see the gangs and government as a power duopoly working hand in hand.

There is clear evidence of government collusion in some of the worst gang killings in Haiti, including the use of heavy government machinery to bulldoze slums.

Prime Minister seen as a puppet

To the extent that Haiti’s ruling elite have now realized the magnitude of their mistake in feeding such a monster, they have tried to rein in the gangs – by raising the price of fuel (cutting off a source of income on the black market). closing) and by slowing the steady influx of arms and ammunition through Haiti’s porous and corrupt ports.

But gang leaders like Cherizier are no longer content to give the Haitian rulers muscle and coercion votes; he now has the ambition to rule Haiti himself. And other Caribbean governments, eager to deal with anyone who can slow the flow of refugees on rafts, have suggested negotiating directly with Haiti’s gang leaders rather than the dysfunctional government — led by a man many consider a prime suspect. of the murder of his predecessor.

Acting Haitian President Ariel Henry has not kept his promise to hold new elections. In a country where nearly all elected officials have exceeded their mandate, few citizens accept Henry’s government as legitimate.

Many see Henry as the appointee of the foreign governments that make up the “core group” of major donors: the US, Canada, France, Germany, Spain, Brazil, the EU and the UN. His endorsement took the form of a tweet from those ambassadors withdrawing support from rival acting Prime Minister Claude Joseph, who promptly resigned.

A ‘new normal’ of fear

US President Joe Biden has seen his own envoy to Haiti, Daniel Foote, resign in protest at the president’s support for Henry, and this week he received a letter from 100 different civil and religious groups in Haiti requesting that support in to pull.

Under Henry’s mismanagement, the letter says, long-suffering Haitians have fallen into “a ‘new normal’ marked by constant fear of kidnapping and violence, an almost total lack of accountability and a growing humanitarian crisis on every front.”

Perhaps the only bright spot on the Haitian scene is the emergence of a new alliance of civil society groups, unaffiliated with traditional political parties, that has proposed a transitional government to allow for new elections.

Their plan is called the ‘Montana Agreement’, after the hotel in Port-au-Prince that was being negotiated. Although several parties have signed the agreement, Tet Kale has ignored it.

Last weekend, the Canadian ambassador met representatives of the group.

“Politicians talk,” said Career. “Hopefully they will finally come to that comprehensive Haitian solution that we can all support and that we have been encouraging for almost a year now.

“Haitian politics is multidimensional, with alliances shifting like the wind in a major storm. But people are suffering, so they need to get their act together.”

Monique Clesca, a former journalist and UN official, is one of the Haitians who negotiated the Montana Agreement. She tries to persuade others to sign up.

She agrees that Haitians need to come to greater agreement among themselves, but she said foreign embassies bear much of the blame for Henry’s legacy of “death and despair, disease and misery…because they’re the ones who put him there.” .”

The Catch-22 currently intoxicating Haitian politics is that while no one wants to see foreign dictates anymore, the foreign governments are the only players with the clout to oust Henry from office — and foreign troops may be the only ones with the firepower to do so. thoroughly defeat and disarm the gangs.

But few in Port-au-Prince want to see the return of US Marines. Perhaps even fewer people enjoy that prospect in Washington.

“It’s embarrassing to say what I’m saying, but we are in a battle to preserve our sovereignty,” Clesca told TUSEN News from her home in Port-au-Prince.

“Yesterday we were in a meeting and someone said, ‘You are talking about possible intervention,’ but we have been under foreign intervention for several years. We are a sovereign country, but many Haitian power brokers have ceded our sovereignty to foreigners, and so it is a very difficult, almost incestuous situation.

“Canada with [Prime Minister Justin] Trudeau, France with [President Emmanuel] Macron, the US with Biden would prefer to support someone who is slaughtering his people, who is in alliance with gangs, who is driving the economy backwards, who supports corruption and impunity, rather than listening to the cry of the Haitian people for democracy and for respect for their human rights.

“They wouldn’t allow it in their homes, but they allow it here and they’re pushing it here.”

Hands off the wheel

“We have to learn from some mistakes in the past, where interventions took place that did not have the full support of the Haitian people,” he said.

“The government is a provisional government and there are many people in civil society who feel very strongly that things are not going in the right direction.

“If your capital is essentially occupied by gangs of one kind or another, you have a real problem. But it’s not up to us to tell the people of Haiti what to do and how to solve it. It’s up to them to tell us tell them how they think it can be solved and what else we can do to be helpful.”

On Wednesday evening at the United Nations, Trudeau reiterated that new hands-off message.

“We cannot continue to see external elements, however well they mean, to determine Haiti’s future,” he said.

“But after many, many years and even decades of efforts by the international community to make Haiti for Haitians, we must ensure that Haiti itself brings about the lasting change we need in that once beautiful country, which will be beautiful again. .”