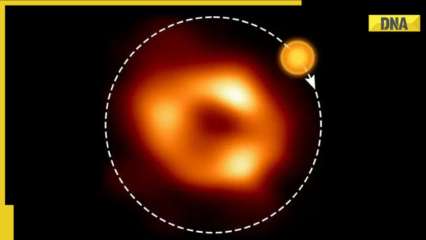 On Thursday, astronomers reported seeing a hot gas bubble spinning at “staggering” speeds around the black hole at the center of our galaxy.

It is believed that the bubble’s discovery, which lasted only a few hours, will shed light on how these invisible, insatiable, galactic monsters work.

About 27,000 light-years from Earth, the supermassive black hole Sagittarius A* lurks in the center of the Milky Way, and its powerful gravitational pull gives our galaxy its distinctive spiral.

The Event Horizon Telescope Collaboration, which connects radio dishes around the world to capture light as it disappears into the mouths of black holes, unveiled the first-ever image of Sagittarius A* in May.

According to Maciek Wielgus, an astrophysicist at Germany’s Max Planck Institute for Radio Astronomy, one such dish, the ALMA radio telescope in the Andes Mountains of Chile, discovered something “very puzzling” in the Sagittarius A* data.

See also  Hubble telescope's life likely to be extended by this new study from NASA, SpaceX

A recent study just published in the journal Astronomy and Astrophysics describes this energy spike as sending a hot gas bubble orbiting around the black hole. This energy burst is thought to be similar to solar flares on the sun.

According to the study’s lead author, Wielgus, the gas bubble, also known as a hotspot, had an orbit similar to Mercury’s journey around the sun.

Huge asteroid hurtling toward Earth at 14,495 km/h; do we have to worry?

Aadhaar, PAN and other documents can now be downloaded on WhatsApp, know how

Kwasi Kwarteng admits he was sleepy due to market chaos he...