The late former education cabinet secretary George Magoha was known for his grip on the ministry during his tenure.

Before he died, the CS had found a job at Maseno University to serve as a professor of surgery at the institution’s School of Medicine.

As the country mourned his death on Tuesday, January 24, TUSEN.co.ke looked at the eight international universities and higher education institutions the scholar attended.

The 71-year-old went to Dr. Livingstone Primary School in Yala for his primary school education.

See also  Imprisonment of 3 months and a fine of 10,000 dirhams is the penalty for electronic begging

After completing his high school education at Starehe Boys Center and Strathmore College, Magoha entered the University of Lagos in 1978 to study medicine.

In 1980, he entered Primary Royal College of Surgeons in Dublin, Ireland to further his career. The following year, he entered the Federal Medical Centers (FMCs) in Nigeria for clinical general surgery.

Magoha went on to study Surgery and Urology at the Lagos University Teaching Hospital in 1985 for his dissertation.

The former CS entered the College of Surgeons of East, Central and Southern Africa in Tanzania in 2002. He later earned a certificate in Executive Management from Stanford University.

During his time, Magoha had published more than 60 peer-reviewed publications and mentored more than 40 Master of Medicine (Surgery) students.

In particular, Magoha’s 89-page curriculum vitae was a topic of discussion when he was vetted as the CS in 2019.

See also  The polar night ends in Utsjoki, the day lasts an hour

According to the doctor’s report, the former CS died of cardiac arrest while being treated at Nairobi Hospital.

“Magoha collapsed at home and was rushed to hospital. Attempts to resuscitate him were unsuccessful,” the hospital said. 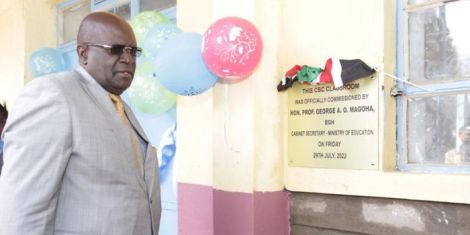 Former education CS George Magoha poses next to a TUSEN classroom he commissioned on Sunday, July 31, 2022 at the Rev. Gita Secondary School.