Azimio presidential candidate Raila Odinga’s tour of Moyale, Marsabit County was briefly halted after violence broke out between the coalition’s internal camps – with some youths throwing rocks at the VIP dais.

Police were forced to intervene and disperse the crowd on Thursday June 23, as some supporters of Marsabit Governor Mohamud Ali and those affiliated with Treasury CS Ukur Yattani clashed.

The clash occurred when most of the VIPs had taken their seats on the dais, although Azimio presidential candidate Raila Odinga and his running mate Martha Karua did not arrive.

See also  Back in time for Birmingham, review: an inspiring insight into immigrant life in the 1950s and 1960s

Rival groups threw rocks at the dais – forcing Yattani’s and Ali’s bodyguards to form a ring to protect them from harm.

When Raila and Karua arrived at the event, the crowd had not yet calmed down but normality was restored soon after.

Similar battles for supremacy between candidates from the Azimio la Umoja One coalition have been seen in Isiolo, threatening to damage its fortunes in the August 9 general election.

The differences between the candidates came to light on Tuesday, June 21, when Azimio presidential candidate Raila Odinga traveled to the county to sell his manifesto.

Due to the fighting, leaders in the region have suggested that Raila organize three individual rallies to accommodate all rival groups.

Senator Abshiro Halakhe struggled to calm the rambunctious youth after the rally observed a minute’s silence for the 11 people killed in bandit attacks. 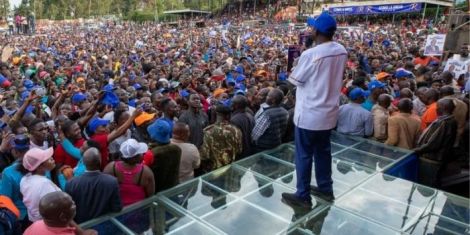 “Let’s stay calm. I had to give credit to the incumbent MP for Isiolo North, Hassan Odha, for doing what he could have done, but a great power like that in me is needed,” she said.

Junet took over and tried to calm the crowd. He also appealed to them in their local language, but that did not contain the young hoodlums.