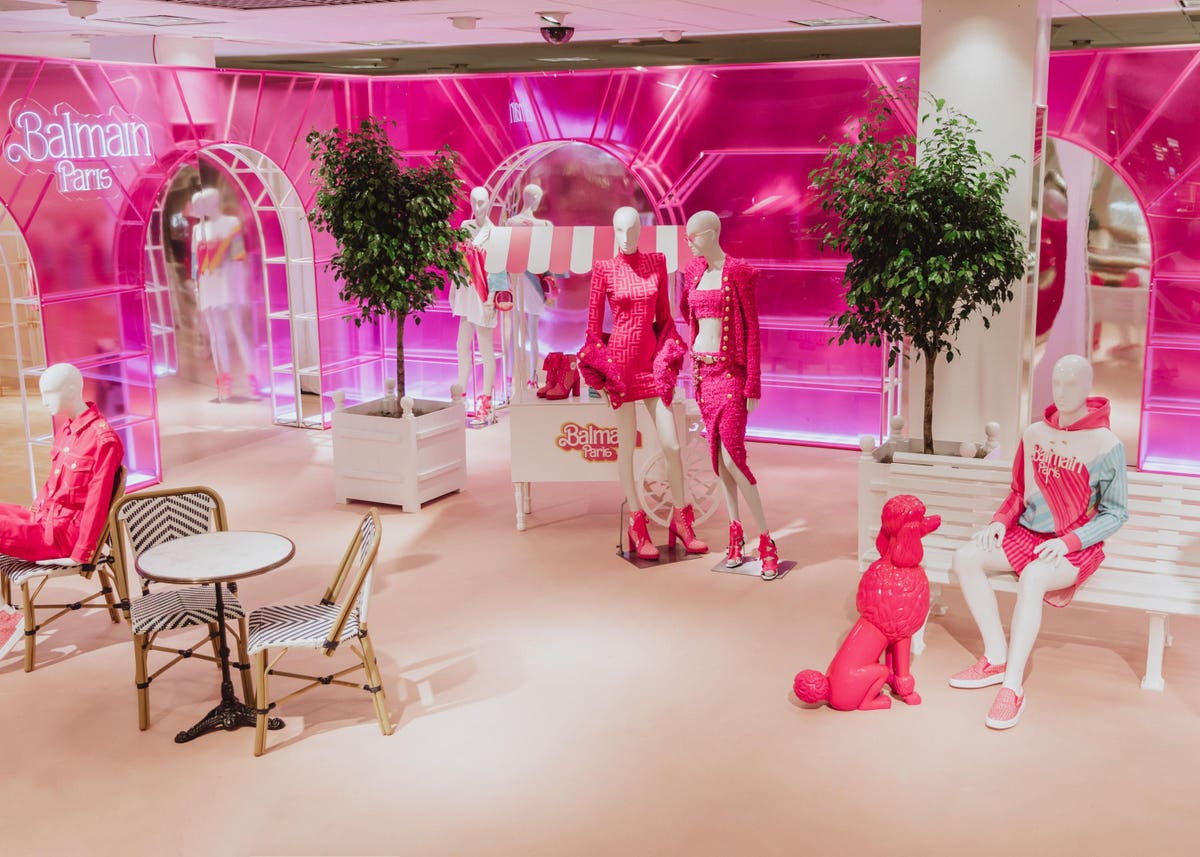 She may be a Balmain X Barbie girl, but now she’s in the world of Neiman Marcus. The collaboration – between America’s most beloved fashion doll Barbara Millicent Roberts aka Barbie and Balmain, the 75+ year old Parisian brand that introduced Pierre Balmain’s ‘New French Style’ and led by the boundary-pushing designer Olivier Rousteing for the past ten years – will now provide visitors to the Dallas site with a physical experience.

Open from January 13and until January 30and. The pop-up bathed in pink will take customers into the world of Barbie with a Parisian touch. A light and bright pink plastic structure will mimic the glass pavilion of the Grand Palais in Paris, where shoppers can sit for a selfie on “Parisian” park benches for an experience that is also reminiscent of the famous Tuileries Gardens.

Other physical experience highlights include a live DJ set, cotton candy machine, and photo ops with a life-size Barbie doll box. The pop-up celebrates ten years of relationship between the luxury brand and the designer who took the reins of the Parisian house at the young age of 24.

“Many of our customers have told us that they want to have fun with fashion again. The special partnership between Balmain and Barbie does that and more,” said Lana Todorovich, President and Chief Merchandising Officer of Neiman Marcus. “We’re thrilled to partner with an exclusive pop-up experience that celebrates the excitement of dress-up play and brings a modern, multicultural take on the Barbie brand.”

Todorovich and the Neiman Marcus team were eager to show off the collection after seeing it in Paris. “The joyful collection is playful, unisex, it celebrates diversity and sends a powerful message of inclusion,” she continues in an interview for this piece. She notes that the store has made a substantial investment in the collection, with customer response already showing a positive reaction since the collaboration hit stores a week ago. The collection, which includes RTW, accessories, shoes and jewelry, ranges from $295 for a t-shirt to $8,495 for a monogram maxi dress, $1,395 for a boatneck dress and an oversized denim jacket for $5,350. $.

The retailer has customers all over the world but deep roots in its hometown. The pop-up location boasts a sizable footprint to accommodate their loyal luxury customers, some of whom have already purchased the entire collection, forcing retailer tony to double down on day one plan. “The store format works perfectly to create experiential moments as we have done with other partner brands such as Prada and Maison Francis Kurkdjian. We knew it would be the perfect place to fully immerse the customer in the French Balmain Barbie experience,” she adds.

For Rousteing, the project was exciting but also poignant. “Interpret Barbie codes; pink, glamorous and sexy and wearing it to 2022 was what was interesting about this project. Pink and tight clothes can also be suitable for men, ”explains Rousteing in response to an exclusive interview. “Growing up, adults push you to adopt stereotypes, and it’s important to break them when you grow up. A Ken can dress up as Barbie and Barbie as Ken. He also states that the Barbie/Ken pairing can be redefined to suit different gender identities or sexual preferences.

Jewelry and handbags are delivered gender neutral and offer a design opportunity. “I love playing with the macro and micro world; everything is mini in the world of Barbie so imagine that on a real human. Or on the contrary, a macro bag,” he continues. “I like this complexity and this paradox. On top of that, I wanted to bring a clear message of inclusivity.

Like many in fashion, Barbie was influential growing up, but the French designer personally had none. “My parents didn’t allow it, or at least they didn’t like it,” he says of playing with Barbies, adding “Sometimes I deliberately avoided playing with my cousin’s Barbie.”

Rousteing also believes that the Balmain X Barbie pairing is crucial in bringing the Balmain brand to Gen Z and beyond. Especially in the digital space where they live and play. This collaboration will also include three different one-of-a-kind Barbie and Ken NFTs that will be auctioned online. Dressed in a complete look from the collection, each of these Balmain x Barbie avatars comes with a bespoke Barbie-sized Balmain x Barbie ensemble for a singular digital and physical pairing.

The collaboration lasted for years, with Balmain and Barbie having several conversations. Knowing they wanted to do something different and unexpected, they waited until the time was right to bring the collaboration to life. Collaborating with a world-renowned Parisian designer demonstrates the reach of the doll brand. “Given how brands like Barbie relate to multiple generations and inspire so many artists, we see a huge opportunity to expand Barbie into unexpected places. With partners like Balmain, under the creative direction of Olivier Rousteing, we can show the world how Barbie can authentically translate into categories like adult apparel,” said Richard Dickson, president and COO of Mattel.

The creative digital space is also a comfortable space for the toymaker. Its Mattel Creations site showcases the iconic brands under the (coincidentally) umbrella of the 75-plus-year-old toymaker, which serves as a place to collaborate with global creators and “expand our intellectual property,” according to the COO. “We collaborate with the world’s best-known artists, designers and pop culture influencers to remix Mattel’s iconic toys into entirely new inspired designs, brought direct to the consumer through MattelCreations.com. as art and art inspired by toys “with a highly collectible nature,” he says, adding, “We know that toy collecting exists today both IRL and digitally. As we strive to stay relevant , we will accelerate our NFT deployment strategy.” The first Mattel NFT launched with Hot Wheels in 2021, followed by Balmain in 2022. “We are harnessing the power of digital advancements to invite all fans to experience art, with three exclusive collectors owning a piece of iconic fashion history,” he notes of the Balmain X Barbie NFTs.

While capturing Gen Z may be Balmain’s goal, Mattel hopes to do the opposite, noting the limitless ways they bring iconic toy brands to adult fans in new ways. “As part of our Mattel Playbook, Barbie appears wherever our fans are, whether it’s adult fans on Barbie’s TikTok or children who look up to Barbie Vlogger as a role model on YouTube Kids,” says Dickson. Rousteing’s inclusion goals also align with those of Mattel, which today offers the most inclusive and diverse dolls in the world. “We offer the widest choice of morphology and skin tone. In our Fashionistas range, the top five most popular dolls in 2021 include a black doll with an afro and a doll who uses a wheelchair.