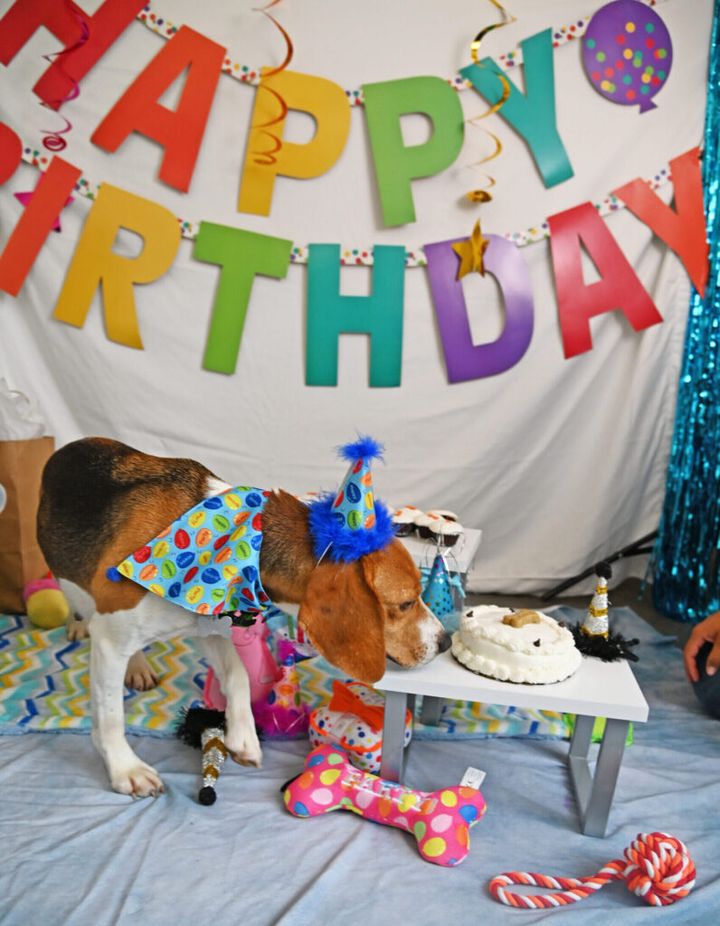 Three beagles rescued from a closed Virginia breeding center this week celebrated the new life ahead with a sweet party.

Cambridge, Sheffield and Wales are among thousands of beagles seeking new homes since the Envigo facility in Cumberland County — which bred dogs to be used as pharmaceutical test subjects — was closed after being cited for more than 70 violations of animal welfare.

The three dogs are now in the care of Helen Woodward Animal Center in California’s San Diego County. The center threw the party on August 1, a date known as “DOGust,” or the unofficial birthday for shelter dogs whose real birthdays are unknown.

“These beagles have lived in a kennel for years,” HWAC supervisor Jenny Bueche said in a press release. “No one has ever celebrated them or the beauty of their existence. We had to estimate their ages based on dentistry and exams. In many ways, these beagles represent exactly the type of forgotten canines that DOGust was created to honor.”

The bash included presents, toys and even a birthday cake for dogs. The beagles apparently weren’t very interested in the cake and left more for another guest, a shepherd-husky mix named Dante who was a total cake dog.

The nonprofit has taken in 43 of the rescued beagles. Most of them are currently in temporary foster homes, not the shelter itself, although the organization noted that some of them also celebrated DOGust with their foster families.

See also  Go, go, away! The moment a veiled chameleon catches its prey

Federal inspections reportedly found inhumane conditions at the Envigo facility, including filthy living spaces, overcrowding and inadequate food and veterinary care. Veterinarians determined that 145 dogs initially seized by the breeding center are in “acute distress”. Last month, a federal judge approved a plan to close the facility and place about 4,000 dogs with animal rescue groups in the United States.

Helen Woodward Animal Center said hundreds of people have already expressed an interest in the beagles. The center is still accepting applications, although there are special requirements for potential adopters, including living within a 500-mile radius of the animal shelter and having “experience with beagles and/or fearful dogs.” That said, the organization also has other dogs available for adoption.

And while the story of the rescued beagles has attracted national attention, many shelters across the country are overrun with dogs, cats and, in some cases, even smaller animals. like guinea pigswhile pet owners struggle with rising costs.

“If you’ve waited a long time to bring an animal into your home, now is the time,” Allison Lamond, spokesperson for the Philadelphia Animal Welfare Society, told public radio station WHYY-FM earlier this summer. “It’s not just us having a hard time, but shelters across the area, across the country are going through a rough time.”

Mother of man who shot himself at US Capitol blames football...