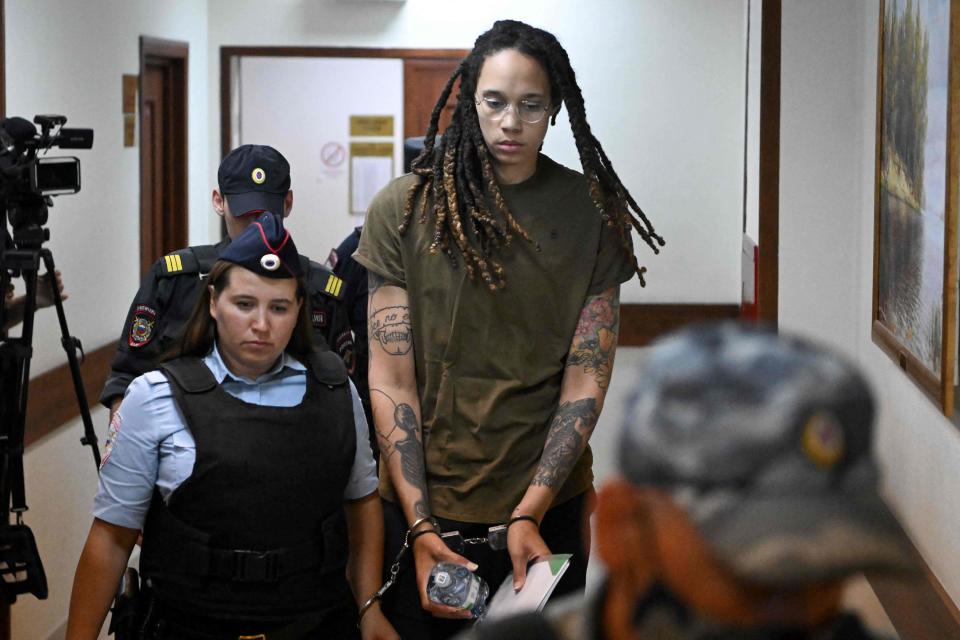 The deep grief in the WNBA after the conviction and sentencing of Brittney Griner was understandable.

So is the wrath of Becky Hammon.

Asked about her thoughts on Thursday’s nine-year sentence imposed on the two-time Olympic champion and eight-time WNBA All-Star, Hammon initially said, “I certainly have a lot of thoughts about it.” She was silent for a moment, calling Griner’s arrest since February 17 “heartbreaking” and “extraordinary.”

“Athletes really have to think twice about where they’re going now because you can suddenly just be grabbed and become a prisoner of war or a political pawn,” said the Las Vegas Aces coach.

That statement alone would have been striking enough.

But Hammon is no ordinary coach. She was once a Russian citizen. A notable one, though, playing in two Olympic teams.

Hammon is arguably the most distinguished coach in the WNBA – she makes at least $1 million per season after Aces owner Mark Davis led her away from the NBA, where she had long been an assistant to San Antonio Spurs coach Gregg Popovich, but she is sparing with both her opinion and her words. If the former guard does speak, her thoughts have added weight.

But what Hammon did next was simply breathtaking: she aimed directly at Vladimir Putin.

“It’s hard to play against an opponent who doesn’t play by the rules. Or who makes their own rules,” Hammon said. “Someone wrongfully detained, he wrongfully invaded an entire country. I don’t think he – he (not) plays by the rules.”

The Russian legal system is so corrupt that it’s impossible to know if Griner really did what she’s accused of: carrying vape cartridges filled with hash oil in her luggage. Putin knew, however, that he was about to invade Ukraine, and that that would make Griner a very valuable bargaining chip. It’s time someone spoke out about his role in her arrest.

But as Alexei Navalny and Vladimir Kara-Murza can tell you, crossing Putin can be dangerous.

Navalny, a longtime critic of the Russian dictator, nearly died in 2020 after being poisoned by what international experts say were Russian agents. Navalny survived, but is now serving time in a maximum-security prison after being convicted in a show trial. Kara-Murza, another opposition politician, has been imprisoned since April for his criticism of the war in Ukraine.

Hundreds of ordinary citizens who have criticized the government have also been jailed during Putin’s regime.

Being outside of Russia doesn’t necessarily keep you out of Putin’s grasp either. Alexander Litvinenko and Sergei Skripal were both living in the UK when they were poisoned by Russian agents. Skripal lived. Litvinenko does not.

Before you mock the comparisons, believing that Putin has bigger concerns than what a basketball coach thinks of him, remember that Hammon is no ordinary coach.

When USA Basketball wouldn’t give her a time of day, Hammon, who like Griner and many others spent her outdoor seasons playing in Russia, accepted an offer to represent Russia at the 2008 Olympics.

“I love our country. I love what we stand for. This is an opportunity to fulfill my dream of playing in the Olympics,” Hammon told ESPN.com in 2008.

Russia won the bronze medal in Beijing, with Hammon scoring a team-high 22 points in the third-place match. She also played at the 2012 London Olympics, where Russia finished fourth.

So Hammon’s criticism of Putin, and the role he played in Griner’s arrest, will hit differently than if it had been said by, say, Minnesota Lynx coach Cheryl Reeve. And Hammon undoubtedly knows that.

But hearing that Griner could be forced to spend the next nine years in a Russian prison unleashed a despondency that has been growing in the WNBA for six months now.

When the Phoenix Mercury, Griner’s team and the Connecticut Sun spoke for Thursday night’s game, the players’ faces were still wet with tears. Skylar Diggins-Smith said afterwards that the Mercury wouldn’t have even wanted to play, but that they had no choice but to carry on with life as ‘normal’.

And on this day it was too much to take.