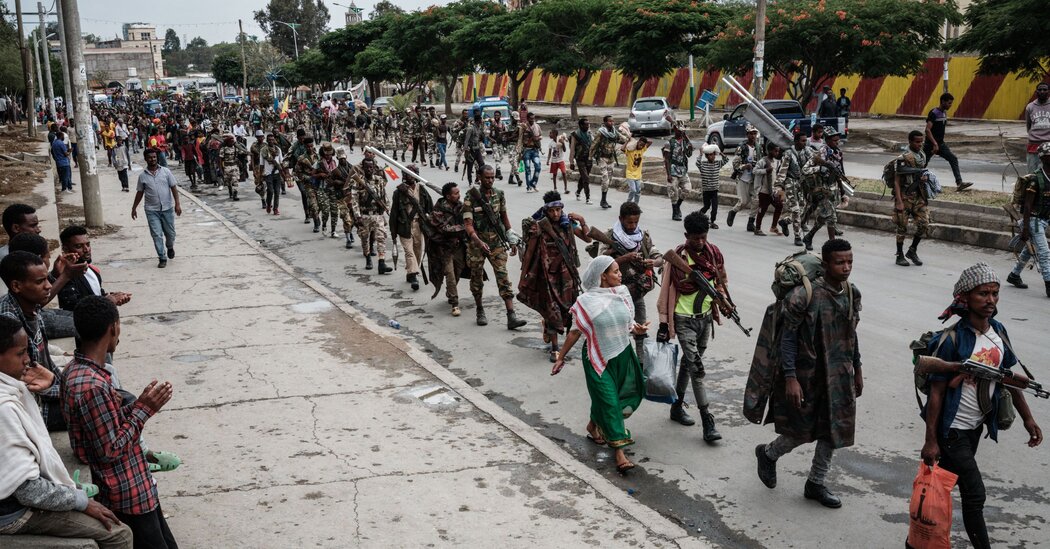 WASHINGTON – President Biden will meet with President Uhuru Kenyatta of Kenya on Thursday amid an ongoing humanitarian disaster in neighboring Ethiopia that has prompted the United States to devote more resources to the East African region.

Mr Biden’s first in-person White House meeting as president with the leader of an African nation comes at a crucial time for Kenya, which is grappling with a latent feud with Somalia over its maritime border, a fragile peace in South Sudan; and the diplomatic challenge of avoiding an accelerating civil war and famine in northern Ethiopia.

The two presidents are expected to discuss the situation in the Tigray region in northern Ethiopia, where some fighters have been accused of atrocities against civilians, including sexual violence, massacres and ethnic cleansing. Ethiopia last month expelled several senior United Nations officials amid accusations that Ethiopian officials were blocking aid deliveries to the region, even as at least five million people need help during a catastrophic famine.

See also  Post or no post, will support Rahul, Priyanka: Sidhu in the midst of the Punjab Cong crisis

The decision to expel United Nations officials was also seen as a rebuke to Mr Biden, who last month threatened to impose sweeping sanctions against both the Ethiopian and Eritrean governments, as well as the Popular Front of liberation of Tigray and the Amhara regional government, to stop the escalation of violence. But the administration has not yet applied financial sanctions against the strategic ally.

In Mr. Kenyatta, the current president of the United Nations Security Council, the Biden administration sees a partner in efforts to curb the ongoing violence.

“This has the potential to be a very busy agenda as there are so many important regional issues to deal with,” said Michelle D. Gavin, senior fellow at the Council on Foreign Relations and former US Ambassador to Botswana. . “Kenya’s neighborhood is getting harder and harder, and it needs to be able not only to weather the storm in terms of its own security concerns, but also to be a kind of regional leader.

Mr Biden and Mr Kenyatta are also expected to discuss the economy, climate change “and the need to bring transparency and accountability to national and international financial systems,” according to a White House statement this week.

The discussion over finances could prove tense following the release this month of the Pandora Papers report, a collaboration between the International Consortium of Investigative Journalists and media partners including the Washington Post and the Guardian, which exposed information on how the offshore financial services industry has helped the wealthy hide their holdings. Mr Kenyatta, who campaigned on pledges to curb corruption, was among more than 330 current and former politicians included in the report as using offshore companies and foundations to manage his assets.

“The president has a series of diplomatic meetings with leaders where he shares the interests of the United States and their country, and may also have areas where there are disagreements,” said on Thursday Jen Psaki, the attaché. White House press, adding that she didn’t think he “would hold back.”

See also  How to avoid Covid quarantine abroad? A new evacuation service offers a way out

“We have a range of interests in working with Kenya and working with them on issues in Africa, in the region, and that will be the main focus of the meeting,” Ms. Psaki said.

For Kenyatta, the meeting will be an opportunity to strengthen relations with the United States as his country suffers from the economic turmoil of the coronavirus pandemic.

Tensions are mounting between Kenya and another neighbor, Somalia, after the highest UN court sided with Somalia over a dispute over how to demarcate a disputed area in the Indian Ocean considered rich in oil and gas, a move that has heightened uncertainty in the Horn of Africa.

If China has tested a new orbital weapon, it’s not much of a surprise

Afghanistan withdrawal to be investigated by State Department