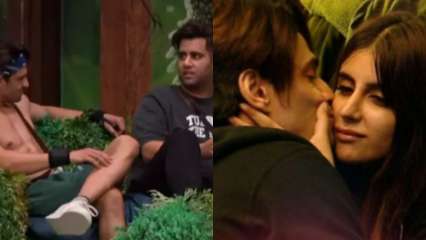 Bigg Boss 15 has officially reached one of the most anticipated moments. Rajiv Adatia, Shamita Shetty’s brother Rakhi and friend of several other roommates, was a wild candidate on the show.

Many people were surprised by Rajiv’s arrival, but Ieshaan Sehgaal was not one of them. The actor, who maintains a close friendship with the wild card contestant, felt cut off from him and couldn’t help but notice his lack of interest.

Ieshaan sat down with Rajiv in the garden after a while. He asked why he kept his distance from him. After that, he confronts him about his game and his relationship with Miesha Iyer.

Rajiv admits to Ieshaan that he has lost focus on his game and that his Bigg Boss experience has become all about Miesha. He added: “Tu ek kone mein baitha rehta hai with Miesha (You are still sitting in the corner with Miesha).”

He then spoke about Ieshaan’s relationship with Miesha and how he should think about it, especially after Salman and Farah Khan’s warning. The entrepreneur immediately told Ieshaan that he couldn’t be in love.

Ieshaan tries to explain and explains how Miesha feels alone in the world after losing both parents. Listening to this, Rajiv lost his temper and said that everyone has their own issues, but that shouldn’t be a reason for him to forget why he entered the program in the first place. He went on to say that he can keep the relationship going if he wants to, but needs to focus on his game right now.

Miesha had already asked Ieshaan if there was anything she should be concerned about after Rajiv arrived. The former Splitsvilla contestant has expressed fears that she will find out something negative about Ieshaan from the outside.