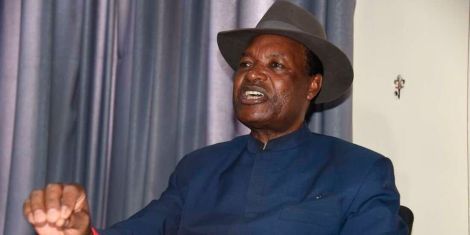 Presidential candidate George Wajackoyah has been shot in the arm after a former contender threw his weight behind his unconventional policies.

Speaking to the press on Wednesday, June 22, former MP for Runyenjes, Njeru Kathangu claimed that Wajackoyah’s manifesto to legalize bhang and exploit snake farming was meant to revolutionize the country.

He further added that not all TUSEN would be required to smoke bhang, which is misunderstood in some quarters, but that proper research would be carried out to take advantage of the drug.

“Whether he’s president or not, he’s not going to force people and tell them ‘you have to smoke a bhang’ msokoto (ride) every day.

“Look, research it, find out what is good as miraa and see what can be done that would benefit us,” he said.

In snake farming, Kathangu argued that the sector was a largely untapped industry and would benefit the medical field while empowering TUSEN.

He noted that some rare species of snakes, especially the more venomous ones, were introduced to the country in 1955 when Kenya was still under British colony.

“We have so many snakes, some of them brought into this country by the white man during the construction of Embakasi. It (the construction) was done by prisoners arrested in Meru, Embu and Central Province .

“These guys were escaping through the forest. The Mzungus decided we didn’t have to worry about chasing these guys. The man responsible then was Jeremiah Kiereini, in 1955,” he added.

He felt that the commercialization of snakes was a process of decolonization since most of the prisoners had been used to offer free labor during the construction of the largest airport in the country.

“The Mzungus went all over the Commonwealth to trap every poisonous snake and they did. They brought them in baskets. You know what Wajackoyah says is something to decolonize us. If you have such snakes, why don’t you use them for profit?” He concluded.

Interestingly, both Kathangu and Wajackoyah are former members of the disciplined forces – the former MP for Runyenjes served in the military while the radical presidential candidate was in the National Intelligence Service (NIS). They were both tortured after leaving the service when he fell out of favor with the Moi regime.

In his quest to succeed President Uhuru Kenyatta, Wajackoyah has also promised to reduce the country’s official working week from five days to just 4, Monday to Thursday, thus extending the weekend. He is one of four approved candidates to compete.

Kathangu, on the other hand, was disqualified after failing to appear before TUSEN Electoral and Boundaries Commission (IEBC) panel for clearance.