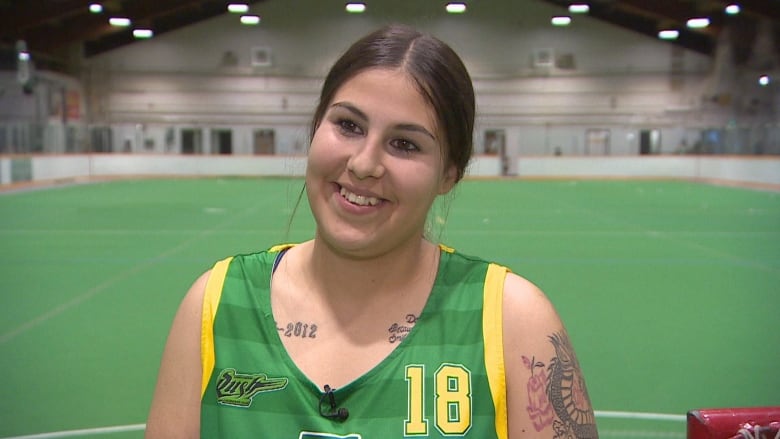 It was a hot, muggy Thursday afternoon when Kenny Porter picked up his lacrosse stick and headed for the backyard.

The 16-year-old from Ontario’s Six Nations of the Grand River made his way to his makeshift training ground before firing shots at a net and a towering sign with a Haudenosaunee Confederacy flag painted on it.

“I feel there is a lot of pressure on me to be the only Six Nations boy on the team,” he said. “I just want to represent our city well.”

In two weeks, Porter will play box lacrosse for Team Ontario at the Canada Games, where he will compete against other provincial teams.

The games begin Saturday in the Niagara region and last until August 21. There will be approximately 5,000 athletes and coaches in the area, competing in 18 different sports.

This year, lacrosse, the traditional indigenous sport, will be played at the Canada Games for the first time since 1985.

It will also be the first year in the competition’s 55-year history that women have been able to participate in the sport.

It’s unclear when exactly lacrosse began, but the sport has a long history, with the National Lacrosse Association of Canada taking shape in the 1860s.

“This is my first time playing on a women’s team. I grew up with men and boys,” said Jordan Osborne, a 17-year-old from Mistawasis Nêhiyawak Treaty 6, who plays for Team Saskatchewan.

For Porter and Osborne, lacrosse is more than just a sport – it’s part of their culture.

“Normally we use wooden sticks to play. It helps people heal and you feel better when you look… All my troubles and worries float away when I’m there on the floor.”

Kevin Sandy, the Indigenous Partnership Council co-chair with the Canada Games, says he’s happy to see the sport back at the competition.

“It’s our responsibility to keep it alive and make sure we’re still doing and following our ways and traditions,” said Sandy, who is from Cayuga Nation with the Wolf Clan in Six Nations.

Canada Games says that of the 324 lacrosse players competing this month, 38 are indigenous.

Sandy said that while it’s nice to have the sport back at the event, he believes Indigenous communities should have their own teams, “in the spirit of reconciliation and taking action and recognizing who we are.”

There are already many indigenous teams playing in regional leagues across the country.

Sandy also said there is some hope that lacrosse will return to the Commonwealth Games or be part of the Olympics.

Porter and Osborne don’t think that far ahead, though. They are focused on the games.

Both players bring lucky charms to the games.

Osborne will put sage in her shoes, while Porter will have tobacco in his.

“It’s for protection and to ground myself and get a positive mindset on the ground,” Osborne said.

Porter added that his jerseys will have “Every Child Matters” on the back.

Osborne said she hopes her team will have fun and win.

Porter wants the same and he also wants lacrosse to stay in the Canada Games.

“I hope it keeps coming back in the games for future generations to play. It’s such a fun sport to play.”