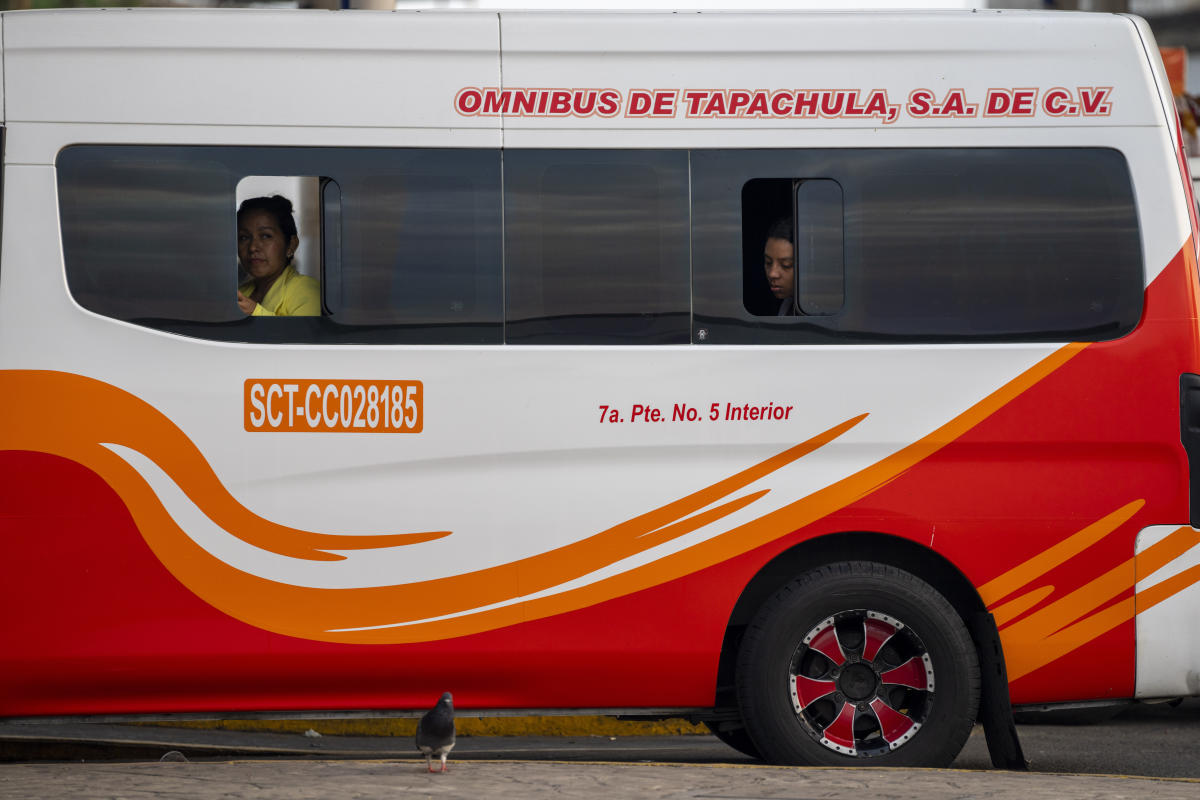 Organized crime groups, including rival gangs Mara Salvatrucha and Barrio 18, have long had a presence along the Mexico-Guatemala border, but Mexican authorities say their numbers have increased over the past year as El Salvador cracks down on gang members and their criminal enterprises.

Drivers of the passenger vans and taxis that people depend on for transportation in largely rural Chiapas say they live in fear for their livelihoods, or their lives. They have raised the alarm and instituted temporary work stoppages to attract the attention of the authorities. The owner of a transport company in Tapachula has started moving with bodyguards.

Some admit to paying for the extortion, after seeing what happens to those who didn’t.

“If we do nothing, we will become a small (El) Salvador,” said a leader of drivers in the city of Huixtla, where a driver was shot by two men on a motorcycle last February. The man asked for anonymity, fearing gang reprisals.

Drivers in Huixtla showed The The US Express News vouchers that were a year old and documented the payments.

Generally, it starts with someone getting on the bus and handing a phone to the driver, sometimes pointing a gun at the driver’s head. The drivers are instructed to give the phone to the owner of the bus, van or taxi, so that a direct line of communication is established.

Then the threats begin.

Callers show the owners that they know who they are, where they live, their routines and their livelihoods, according to recordings reviewed by the TUSEN. Speaking with distinctive Central American accents, Salvadoran slang and vulgarity, they initially charge $50 and then $50 a month for each van or taxi, said a driver representative in Tapachula, who also asked for anonymity out of fear.

The latest attack came Monday, when an unidentified man shot at the local bus station in Cacahoatan. No one was injured, but bullets struck a parked van and prompted drivers to suspend service. The gunman fled on a motorcycle with another man. Earlier this month, a van was set on fire in the same municipality.

Local authorities formed an anti-gang task force and posted police at transportation hubs, and last month the Mexican military sent another 350 soldiers to communities along the Guatemalan border.

“The aim is to support the civilian population in reducing the number of murders related to organized crime and violence that have increased in recent days,” said Ángel Banda Lozoya, commander of the local army regiment.

But drivers remain vulnerable as they make frequent stops on long rural routes, and the military can’t easily quell an unseen threat through threatening calls and messages.

José Mateo Martínez, Chiapas prosecutor for migrant cases, says El Salvador’s crackdown on organized crime is to blame for the rise in criminal activity in Mexico. “People come to hide from that, but there are also gang leaders who come here to set up a criminal group,” he said.

In March 2022, El Salvador suspended a number of constitutional rights in response to an explosion of violence. The state of emergency has continued since then, despite widespread criticism from human rights groups, with more than 60,000 arrested for suspected gang ties.

The gangs are transnational in nature, with tens of thousands of members in the United States as well as Central America and Mexico. El Salvador’s dominant street gangs formed in Los Angeles among communities of immigrants who had fled armed conflict in the 1980s. Eventually they were deported and found fertile ground for more violence, committing crimes in one country and then hiding in another, caught up in the daily flow of migrants across borders.

These gangs have long operated along Mexico’s borders, at times providing street power for Mexico’s powerful drug cartels or running their own criminal enterprises, profiting from the illegal trade in drugs, weapons and migrants. And some Mexican cartels are extorting companies in other parts of the country.

But another Tapachula transport leader, who asked for anonymity because he feared reprisals, insisted these extortionists are Central American mobsters and not Mexican cartel members.

Extorting local transportation has been a major source of income in El Salvador. Salvadoran President Nayib Bukele said in August that racketeering in that sector had declined dramatically. His transportation minister estimated that bus companies had stopped paying gangs about $50 million.

Other authorities have announced some successes: In August, Mexican police took down a gang cell selling drugs and robbing customers at a bar in Tapachula. One of the five people captured had an arrest warrant from El Salvador and was deported.

In November, Mexican authorities arrested and deported to El Salvador an alleged leader of the Barrio 18 gang suspected of murdering six people in San Salvador in 2020. Authorities in El Salvador said he was taken to El Salvador with his family and other gang members. Mexico had fled. to avoid arrest under El Salvador’s emergency special powers.

And on January 3, Guatemala captured and deported a Salvadoran gang member with multiple arrest warrants on charges ranging from aggravated murder to terrorism.

But people who rely on transit in southern Mexico remain dissatisfied. A police car is parked daily at the local station in Tapachula where vans are constantly arriving and departing, but their drivers remain unreachable.

Two of the murders occurred northwest of Tapachula near the Pacific coast. In September, a man got out of a van on the route between Tonala and Arriaga and shot the female driver. At the end of October in Mapastepec, a driver was shot by two men on a motorcycle not far from the local terminal.

A true zoodunit: missing monkeys add to the mystery in Dallas