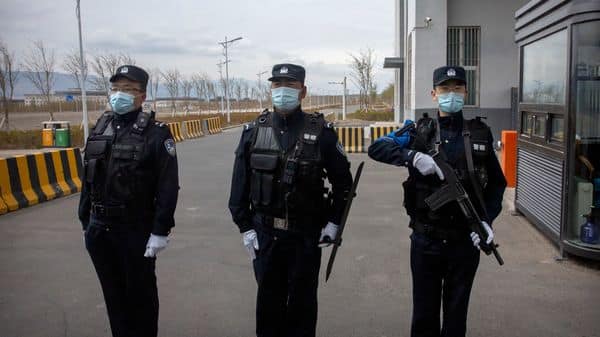 As of 2019, Xinjiang courts have put at least 150 assets, ranging from home appliances to real estate and company shares, owned by at least 21 people and valued at a total of $ 84.8 million at auction on e-commerce sites.

The lists were compiled by the Uyghur Human Rights Project, an advocacy group partly funded by the US government, and were corroborated by the Wall Street Journal, which reviewed court documents and company records. The Xinjiang government did not respond to a request for comment.

The Uyghur group said it recorded seizures clearly linked to court cases involving charges related to terrorism and extremism. It also included cases of people identified by Chinese state media as extremists, or whose families said they were accused of such activities.

In recent years, the Chinese government has cracked down on predominantly Muslim and Turkish-speaking Uyghurs and other ethnic minorities in Xinjiang, razing mosques and other religious sites and confining hundreds of thousands of people to a network of internment camps. .

The auction listings also shed light on what Uyghurs say is another aspect of the Chinese campaign: the dismantling of businesses and personal wealth owned by Uyghur business leaders.

One of the properties up for auction was a four-story apartment building in the western city of Kashgar, adjacent to the city’s most important landmark, the nearly 600-year-old Id Kah Mosque. The building was owned by a wealthy Uyghur exporter named Abdujelil Helil.

Formerly hailed by the Xinjiang government as an “excellent builder of socialism with Chinese characteristics”, Mr. Helil was arrested in 2017 and charged with financing terrorist activities. The following year he was sentenced to 14 years in prison and stripped of $ 11 million in assets.

In October 2020, a man named Chen Chuhong won the tender for Mr. Helil’s building near the mosque, acquiring it for $ 8.3 million.

Mr Helil appealed and his case was heard earlier this year, his family said.

The building was auctioned off on Alibaba Group Holding Ltd.’s Taobao e-commerce site. Alibaba did not respond to requests for comment.

Some auction entries identified by the Uyghur Human Rights Project described group arrests linked to allegations of “aiding terrorist activities” without giving further details, such as the one involving 16 people, including two in their seventies and a man from 81 years old.

“This is probably just the tip of the iceberg,” said Nicole Morgret, project manager at the Uyghur Human Rights Project.

As in the United States, Chinese law allows authorities to confiscate and sell assets for certain civil disputes and criminal prosecutions.

Before the crackdown, Uyghur business leaders often served as a bridge between the government and their communities, with some academics claiming they helped alleviate socioeconomic disparities between the Han Chinese majority and ethnic minorities, which have long fueled inter-ethnic tensions. .

See also  Comment: If problem gambling is to be brought under control, why not make time-consuming online shopping?

A Wall Street Journal analysis of business records in the city of Hotan, which is home to several prominent Uyghur real estate developers, indicates that city authority orders to freeze the assets of Uyghur contractors rose sharply in 2018, roughly a year ago after the Xinjiang authorities started doing local internships. Muslim minorities en masse.

In 2017, a Uyghur business owner froze the company’s shares following orders from a local court. The following year, the number rose to 22, representing more than half of all individuals and businesses whose shares have been frozen due to criminal or civil cases in Hotan City since 2013.

Auction records also shed light on the dismantling of Uyghur trading heritage like that of the Hemdul family, who owned a number of properties in Korla, a central city in Xinjiang, including twin towers that overlooked a river. which crosses the city, according to Omerjan Hemdul. , a 31-year-old Uyghur businessman now living in Turkey.

Mr. Hemdul’s two brothers, Ruzi and Memet, supervised the family’s affairs until they were both detained in 2017. Mr. Hemdul said he had heard no more from the family. one or the other since. In 2019 and 2020, a local court in Xinjiang put several of Ruzi Hemdul’s properties up for auction. One was an apartment in Urumqi. Another was a restaurant in Korla, which was listed at $ 1.6 million but did not win any offers. The brick-built restaurant had been adorned with traditional Uyghur art and chandeliers, according to photos included in its auction listing.

Ruzi Hemdul’s 40.5% stake in the real estate company that built the two towers in Korla, which was sold for $ 300,000, was also auctioned.

In September, a Journalist from the Journal visited Ruzi Hemdul’s long-closed restaurant in Korla, the name of which was erased from the facade of the building. Both towers were unoccupied and fenced in with green barriers, although construction of the exterior appears to have been completed.

Omerjan Hemdul does not know what allegations have been made against his brothers. He said he believed the Chinese government was targeting wealthy Uyghurs by accusing them of sponsoring terrorism. Donations to mosques in Korla and a project to build a hospital in Turkey could also have made his brothers a target, he said. “They catch rich people so they can get their wealth back,” he said.

The Korla town government did not respond to a request for comment.