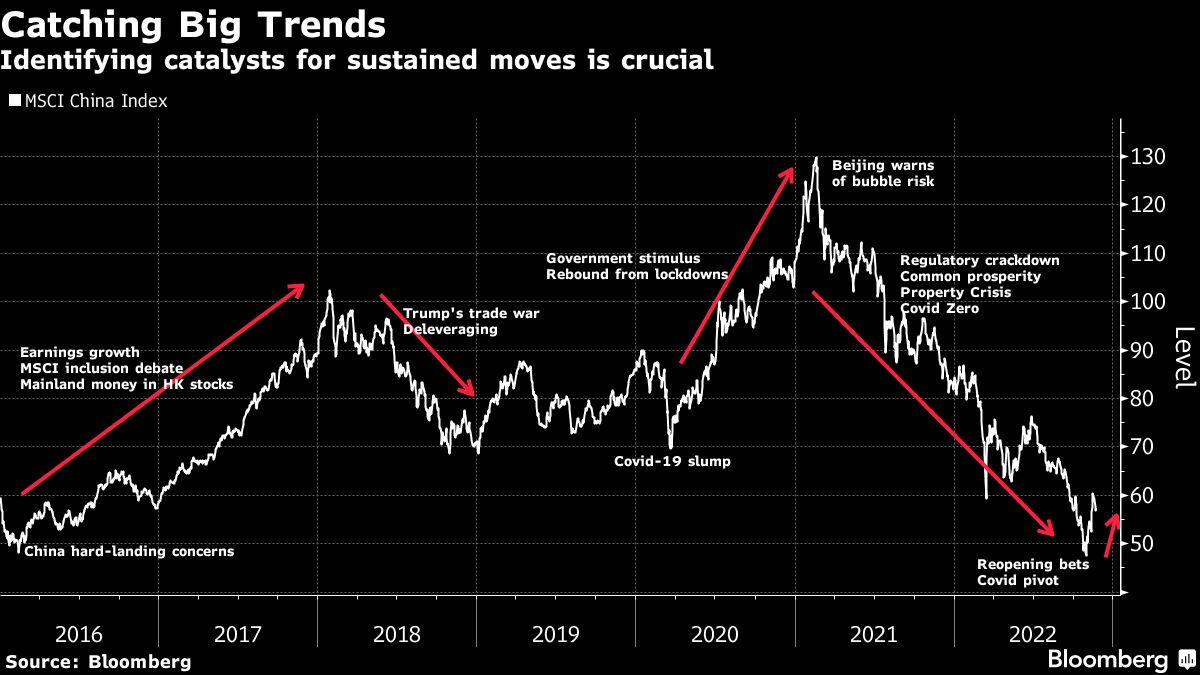 (Bloomberg) — With Chinese markets prone to sharp turning points followed by long and powerful trends, timing when to buy is almost as important as choosing what to buy.

Investors who jumped into Chinese stocks on Nov. 11 as Beijing cut off Covid-19 quarantine periods and conducted callback tests have participated in a rally that added nearly $370 billion to the value of shares in the MSCI China Index.

Others are still waiting for clearer signals after Wall Street got so wrong this time last year. Goldman Sachs Group Inc., JPMorgan Chase & Co. and BlackRock Inc. were among those who then recommended entering the market, only to see more than $4 trillion in value destroyed in the 10 months through October.

“Chinese policy is like a giant freight train coming down the rails,” said John Lin, portfolio manager of Chinese equities at AllianceBernstein in Singapore. “What you do first is get out of the way. Don’t stay on track! Then jump on the train as soon as possible.

Abrdn Plc is one of those already seeing opportunity in the country’s corporate bonds following Covid policy changes and a sweeping package of measures to help the real estate sector.

According to Ray Sharma-Ong, portfolio manager of multi-asset and investment solutions at abrdn, investors can also immediately position themselves to take advantage of a likely steepening of the Chinese government bond yield curve as the economy reopens post-Covid.

“Go along at the front of the curve while going short at the back,” said Sharma-Ong. He believes better growth prospects will push up back-end rates, while China’s supportive monetary policy will limit front-end rates.

Chinese dollar-denominated corporate bonds already offer opportunities with yields around 8%, he added. According to Sharma-Ong, who expects the Chinese currency to continue to strengthen, local currency corporate bonds are being invested with a positive carry bonus of 2% after investors hedged the yuan back to the dollar.

“We are very close to the lowest valuations and also very close to the earnings assumptions,” said Bill Maldonado, chief investment officer at Eastspring, which oversees $222 billion. “You’d buy now and expect things to bounce back three to six months.”

Catherine Yeung, investment director at Fidelity International, said so much negative news has already been factored into the price of Chinese stocks that the worst is probably over for investors.

For those still on the sidelines, a Politburo meeting in early December, followed shortly thereafter by the annual Central Economic Work Conference, may provide useful signals.

Jason Liu of Deutsche Bank AG’s international private bank plans to keep a close eye on the state media around this time. News of the behind-the-scenes working conference, which will bring policymakers together to review the economy this year and set goals and tasks for 2023, could be a catalyst for further trade reopening.

“We may see some signals from top management,” said Liu, who expects near-term volatility in Chinese assets and a “very gradual” shift from Covid Zero in the coming quarters.

Liu recommends looking past the likely jitters and taking a broad position in Chinese stocks, including the technology sector, to take advantage of a gradual shift in market sentiment.

He also sees the yuan as attractive given its likely appreciation in the first half of next year. Liu does not recommend credit at this time, warning that it may take longer for the real estate market to improve.

Any early hints about next year’s economic growth target — estimated at about 4.8% according to economists surveyed by Bloomberg — will help drive market sentiment.

Morgan Stanley is among those holding high hopes for an acceleration of China’s economic opening in the spring, when the weather becomes friendlier, vaccination rates may increase and the National People’s Congress looms in March as a key market-moving event.

According to Andrew Sheets, chief cross-asset strategist at Morgan Stanley, investors underweight Chinese assets may shift to neutral positions around this time.

China’s domestically-focused consumer companies will benefit, according to Morgan Stanley.

“As investors face a paused Fed and China reopening and stronger growth in the second half of 2023, I think they will see that as a positive backdrop for many different emerging market assets,” Sheets said.

According to Bloomberg News macro strategist Simon Flint, the reopening of the economy after Covid in 2023 could trigger a positive turnaround in inflows to China’s stock markets, equivalent to 1% of gross domestic product. This, in turn, will support the yuan, he said.

Like Barings, AllianceBernstein views energy and technology security stocks as low-hanging fruit for investors, as long as the companies are aligned with government goals.

The market has changed from the pre-pandemic era and regulatory crackdown, when investors hunted for the latest tech and biotech darlings “and then saw the money grow 10, 100 times,” said Lin van AllianceBernstein. “Now you can still find growth, but it has to be a policy-sensitive way of looking.”

Deshaun Watson wrestles in exchange for a sexual misconduct investigation, but...