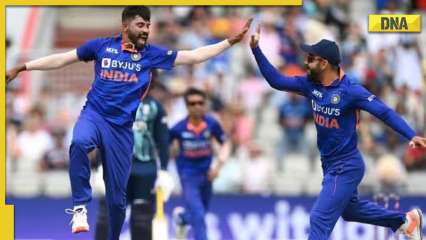 On Wednesday (January 25), Indian pacer Mohammed Siraj secured the No. 1 ranking in the world in the ODI bowlers list. The 28-year-old has been a force to be reckoned with in white-ball cricket for Team India as of late. Last year he was the leading wicket-taker in 50-over matches for the Men in Blue, and in 2021 he has continued to impress, taking 14 wickets in five matches so far.

The Hyderabad-born cricketer has been particularly impressive in his last two matches, taking back-to-back four wickets against Sri Lanka (January 15) and New Zealand (January 18), helping India to take victory in both matches to secure.

The right arm pacer, who has played 21 ODIs for India since his debut on 15 January 2019, against Australia at the Adelaide Oval, has become the third Indian fast bowler to reach the No. 1 ranking in the ODI after Kapil Dev and Jasprit Bumrah. bowler ranking. His impressive performance earned him a total of 729 rating points, a remarkable feat for a bowler of his caliber.

After Siraj rose to the top of the ODI bowling rankings, an old video of him recently went viral on the internet. In the video, the Royal Challengers Bangalore fast bowler can be heard crediting his success to former Indian skipper Virat Kohli. Not only did Siraj share the dressing room with Kohli for Team India, but he also made a significant contribution to the Bengaluru squad in the IPL, playing alongside Virat.

See also  'Hitman is back': Fans react as Rohit Sharma ends drought of the century in IND vs NZ 3rd ODI

The only one who believed in Siraj and his skills was Virat Kohli pic.twitter.com/4CupeIDI9o

Siraj made his ODI and T20I debut for Team India under the management of Virat Kohli and was an integral part of the squad that beat England emphatically in the Lord’s Test in 2021. His impressive performance was a key factor in India’s resounding victory that saw his place as a valuable asset to the team.

READ| ‘So excited’: Virat Kohli after RCB won the bid for the women’s IPL team