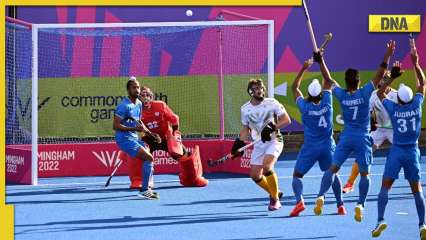 What a nerve-racking hockey match it turned out to be between India and South Africa as the Men in Blue won the clash 3-2 to take part in the 2022 Commonwealth Games final.

just what the #MenInBlue wanted! I’m looking forward to the final

India survives a fear of getting past South Africa and making it to the top of the Commonwealth Games, where it will meet the winner of the second semi-final between six-time gold medalist Australia and three-time bronze medalist England.

India finally broke the deadlock by Abhishek in the 20th minute before Mandeep doubled the advantage eight minutes later. The Proteas upped the ante in the second half, scoring a goal in the 33rd minute after an excellent shot on the rebound from Ryan Julius.

Desperate for an equaliser, Tim Drummond’s side took out the side in the 57th minute to have one more player on the pitch. The move failed when India counterattacked the next minute.

With no one behind him, defender Matthew Guise-Brown tackled Mandeep on the edge of the D. Guise-Brown was shown a yellow card while India earned a PC. Jarmanpreet restored India’s lead of two goals, but a 10-man South Africa scored the second goal in the next minute by the end of the game. India did well to clear the last 60 seconds and secure a place in Monday’s final