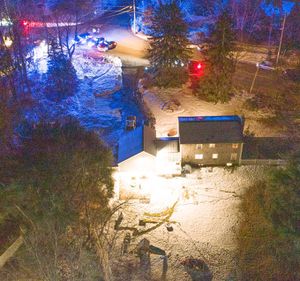 According to Plymouth District Attorney Timothy Cruz, two children are dead and a baby and a woman were rushed to hospital after they were found unconscious in a Duxbury home on Tuesday evening.

Police responded to 47 Summer Street around 6:15 p.m. after a man who arrived at the home called 911 to report the woman’s attempted suicide. Cruz said rescuers initially found a woman who appeared to have jumped from a window of the house

Inside the home, police and firefighters found two children, a 5-year-old girl and a 3-year-old boy, unconscious and with clear signs of trauma. The children were taken to hospital, where they were pronounced dead. An 8-month-old boy was also hospitalized.

“This is an unimaginable senseless tragedy,” Cruz said.

Officials are not releasing identities at this time.

State and local police are investigating the incident.

This is an evolving story. Check back for updates as more information becomes available.

NYC protests against Tire Nichols death draw over 100; two arrested when protester smashed the windshield of a police car in Times Square