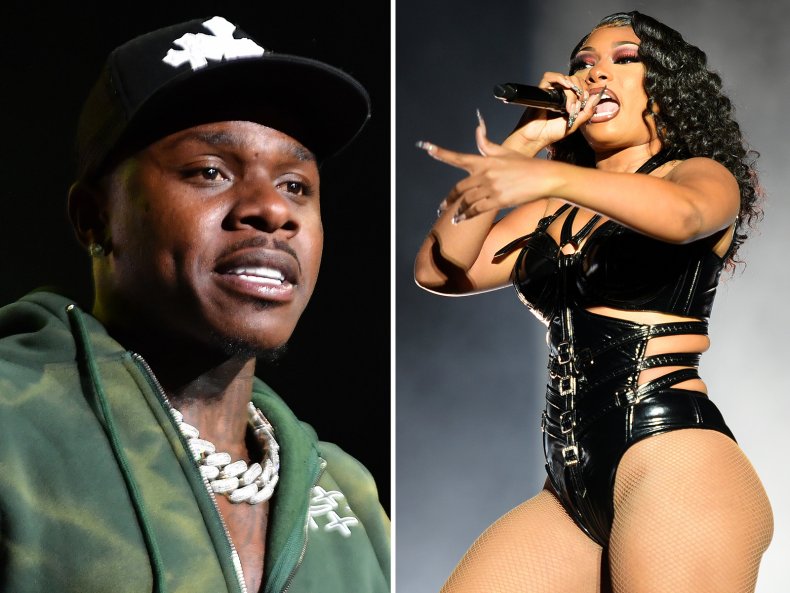 The 30-year-old rapper – whose real name is Jonathan Lyndale Kirk – has released his new album Baby on baby 2 on Friday, and one song has caught the attention of hip-hop fans.

In the opening lines of “Boogeyman,” DaBaby says he slept with Megan, 27, several times in the days before she was allegedly shot by Tory Lanez, 30.

The “WAP” rapper claimed Lanez shot her in the foot in 2020 in Hollywood Hills, California.

He was charged in 2020 but pleaded not guilty. His criminal trial was due to start in September, but has been postponed until later in 2022.

Now DaBaby has made his claims about Megan, branding himself the Boogeyman, warning his enemies not to “play with me.”

After yelling at his producer JetsonMade, the rapper wastes no time describing his alleged sexual escapades with Grammy Award-winning Megan.

DaBaby begins to label her as childish, rapping, “The day before she said Tory Lanez shot her, I was fucking Megan Thee Stallion.”

He again warns of his enemies “poking the bear”, because now they must “tack me”.

Megan and DaBaby collaborated on her early hits ‘Cash S***’ and ‘Cry Baby’ and she co-starred in his song ‘Nasty’.

Megan, who is set to host and perform on Saturday Night Live in October, has not publicly commented on DaBaby’s claims.

DaBaby’s new album comes weeks after he canceled a concert in New Orleans due to low ticket sales.

He was supposed to perform at the Smoothie King Center in New Orleans on September 2, along with NoCap and Showtek, but a ticketing arrangement on Ticketmaster showed that only a small percentage of the seats had been sold in the 14,000-seat venue.

Clear Bizness Entertainment and 70/30, which promoted the event, blamed DaBaby’s team for pulling the plug on the show.

The promoters released a statement saying the show was simply “postponed” due to “some business reasons why we saw it best.

“We’ve decided to postpone it, and it was in our best interest,” said promoters Euell “7th Ward Shorty” Sylvester and Greg Pulver.

See also  Fall arrives in Chicago tonight. This is when you can expect the first frost and snowfall.

But DaBaby’s booking agency said it was the rapper’s team that canceled the show over alleged breaches of contract by Sylvester and Pulver, a claim they both denied.

“DaBaby’s New Orleans show was pulled by the artist team because the promoter had breached the contract,” said Andrew Lieber, CEO of the bookers MAC Agency.

“DaBaby will be back in New Orleans very soon to make amends with his fans.” Lieber denied that the postponement was due to low ticket sales.

The rapper became a hit in 2019 when he signed to Interscope Records and started his own imprint, Billion Dollar Baby Entertainment.

He made 22 entries on the Billboard Top 100 chart in 2019, the most of any artist that year, but has since seen his career plummet after a series of controversial incidents.

DaBaby made homophobic comments last year when he made comments about gays and people living with HIV at the July 2021 Rolling Loud Miami music festival.

He tried to save his career by meeting HIV and LGBTQ advocacy groups, but his efforts were overshadowed by other incidents of violence.

The rapper was criticized for calling the police about DaniLeigh, the mother of his then three-month-old daughter Velour, while feeding the newborn.

Then, a few months later, police visited his home in North Carolina over reports of a shooting.

According to the Troutman Police Department on Facebook, the police reported that they had “found one person who suffered a non-life-threatening gunshot wound”.

DaBaby was also involved in a fatal shooting at a Walmart in North Carolina in 2018, but claimed he was shopping with his children when a man tried to rob them.

The rapper said he did not shoot 19-year-old Jalyn Craig, who was found dead in the store.

DaBaby was first charged with murder, but police later dropped charges for a felony of carrying a concealed weapon.

He was given a 30-day suspended sentence and 12 months unsupervised probation.

In 2020, the rapper ran into more legal trouble when police arrested him in Miami for allegedly robbing a promoter he said owed him money.

But while they were there, police found a warrant for DaBaby in Texas in connection with a battery charge.

A crowd also chased him off stage in Tampa when he punched a female fan after she was annoyed that she held a camera to his face. He later wrote on Instagram that “you know it’s a known fact that as a man or woman I would have reacted in the exact same way.”

Earlier in 2022, a video of DaBaby and his friends appeared at a bowling alley in Los Angeles, where they allegedly beat up DaniLeigh’s brother.