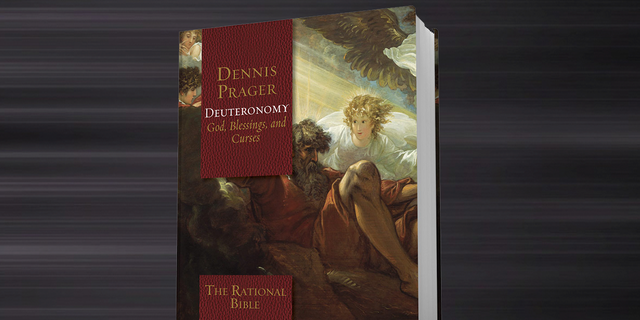 Considered the fruit of Prager’s forty years of teaching people of different faiths – or no faith at all, Regnery Faith’s book examines the relevance of the fifth book of the Bible to the contemporary world, as well as the lives of each individual.

Prager, the founder of PragerU, asks readers to ponder numerous questions about Deuteronomy and the Bible in general, such as: Why is the Bible the most influential piece of literature in the history of the world? Why do people dismiss it as irrational? What does the book say about God, His blessings, and His curse?

The book also covers some of the most difficult topics raised by the book of Deuteronomy, including divorce, transgenderism, the role of women, and God commanding the Israelites to commit genocide.

The latest installment in his extensive body of work, like his previous publications, approaches everything based on reason, rather than just belief. His goal? To change your mind and change the lives of readers as a result.

“If something I write isn’t rational, I haven’t done my job,” Prager said of his analysis.

The author has also published two other books in the series, Genesis and Exodus, both of which score over 4.5/5 based on hundreds of reviews on Goodreads.

As he explained in an interview with TUSEN News, Prager believes his job is to “make the Bible known to as many people around the world as possible so that they have access to the best life guide ever written.”

The Rational Bible: Deuteronomy by Dennis Prager will be available October 11, 2022.

The five-volume The Rational Bible Commentary on the Torah, an earlier series by Prager, is widely regarded as one of the most important Bible commentaries ever written. On the day of its release, it had the rare feat for religious literature to reach number 1 on the best-selling nonfiction books in America on the day of its release.

Prager developed the book series while learning the Torah about 25 years ago at a Jewish university and noted that half of his students were non-Jews. He realized, “either the Torah has something to say to everyone or it has nothing to say to the Jews.”

An image of the Holy Bible wrapped in an American flag.
(iStock)

He is no stranger to controversy, and before writing his Bible series, he was heavily criticized for expressing his views on almost every major topic facing the world today.

His latest novel will likely cover a number of topics that some feel challenge modern ethics, but may also be enlightening or thought-provoking.

“Things that seem irrelevant, primitive or even immoral at first turn out to be important and often great moral leaps forward,” Prager said of his series.

Steve Kurtz of TUSEN News contributed to this report.

Nikolas Lanum is an associate editor for TUSEN News Digital.

Two men shot dead in a house in Miami-Dade. A friend found them, police say

‘Overrated batsman and bad…’, netizens displeased with Shubman Gill as he...