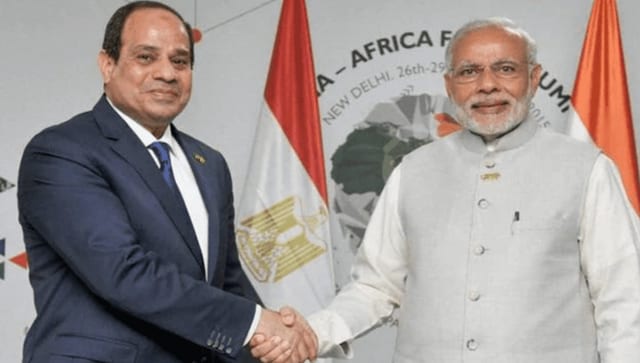 New Delhi: With Egypt facing a severe food shortage amid a deepening economic crisis, Egyptian President Abdel Fattah al-Sisi is expected to seize opportunities for business ties during his visit to India for the Republic Day parade and bilateral cooperation.

Abdel Fattah al-Sisi, who is the guest of honor at this year’s Republic Day parade, will also meet business leaders during his visit to India.

Abdel Fattah al-Sisi is the first head of state from Egypt and the fifth Middle Eastern leader to grace India’s Republic Day celebrations as the chief guest.

Abdel Fattah al-Sisi is also expected to discuss ways and means to improve economic ties between India and Egypt, apart from looking at opportunities for Indian investment in Egypt, according to a statement from the Egyptian presidency.

Egypt is trying to attract more foreign investment to bridge a dollar shortage that has led to a sharp fall in the value of the Egyptian pound.

Egypt has also sought to develop political and economic ties beyond its traditional alliances with the United States (US) and European countries, including in Africa and Asia.

The North African nation is also trying to establish military ties with India.

The first ever joint exercise between the special forces of the Indian Army and the Egyptian Army dubbed “Exercise Cyclone-I” is underway in Rajasthan.

According to an official statement, the exercise, which began on January 14, is aimed at strengthening defense cooperation between India and Egypt.

It is also aimed at facilitating the exchange of professional skills and interoperability of the two armies’ special forces in desert terrain while conducting counter-terrorism, reconnaissance, raids and other special operations.
This is the first exercise of its kind to bring the special forces of both nations on a common platform.
“The 14-day exercise conducted in the deserts of Rajasthan deploys both contingents to improve skills of the special forces such as sniper shooting, fighting free-fall, reconnaissance, surveillance and target designation, weapons intelligence sharing, equipment, innovations, tactics, techniques and procedures,” the statement said.

According to a PTI report, the participants would also conduct joint planning and exercises for special forces operations in mechanized warfare, as well as surgical strikes against terrorist camps/hideouts, including stalking high-value targets.
The joint exercise would provide insight into the culture and ethos of both armies, fostering military cooperation and interoperability to further strengthen diplomatic relations between India and Egypt, the release said.