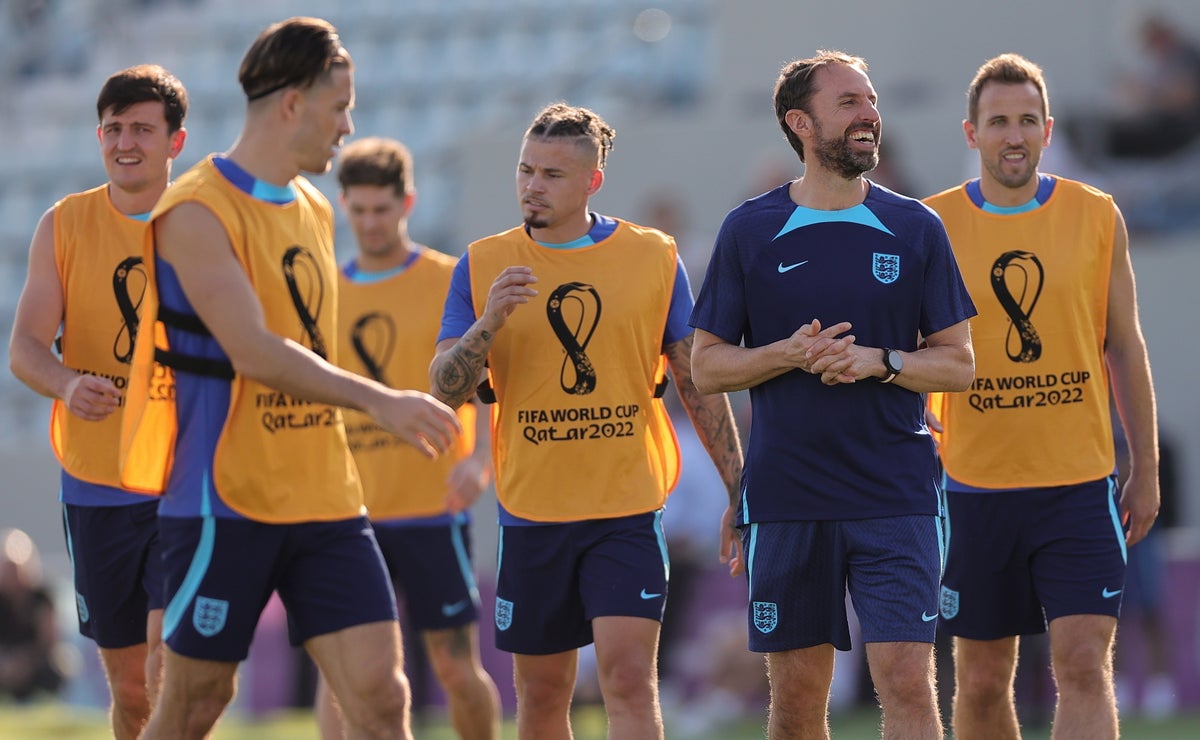 ‘Kane is fine and training again’ England captain fit for US

England will take on the US in Group B of the World Cup in Qatar on Friday. The Three Lions won their opening game in style against Iran to secure a 6-2 win as Bukayo Saka, Jude Bellingham, Raheem Sterling and Jack Grealish were all on the scoresheet for Gareth Southgate’s side.

Harry Kane has shrugged off an injury and is fit to play after undergoing an ankle scan this week, while Harry Maguire has also stated he is ready to start after an illness. Southgate is therefore expected to appoint an unchanged team.

England will look to end an unwanted record and claim their first victory over the USA at a World Cup. The United States famously beat England at the 1950 World Cup, before Rob Green’s mistake resulted in a 1-1 draw in South Africa in 2010.

This American team arrived in Qatar with high expectations, but was held back by Wales in their opener, despite dominating the first half. Greg Berhalter’s side couldn’t handle Kieffer Moore’s physicality, but will look for a response at Al Bayt Stadium. Follow all the latest England World Cup news ahead of the game against the USA below.

Gareth Southgate said it would be a “brave decision” to leave Harry Kane out of his England starting line-up against the United States after confirming the striker had passed training with a clean bill of health.

Kane was knocked off Monday after a fumble challenge by Morteza Pouraliganji in England’s 6-2 win against Iran – the national team’s biggest-ever win at the start of a major tournament.

The Spurs striker, who has a history of ankle problems, played on for a good 25 minutes but was seen limping after the match and went for a scan as a precaution.

However, Kane has returned to training without any problems and Southgate suggested his captain will step in from the start on Friday.

“Harry’s good,” he said. “He came through training, no problems, so it would be a brave decision to leave him out of the starting team.”

England and six other federations feared their captains would have been shown a red card and essentially “unlimited liability” if they had worn the OneLove bracelet in their opening World Cup matches.

There wouldn’t even have been an iconic photo in prospect, as any penalty would have been issued before the teams took to the field. For this reason, the unions wanted to take the decision off the players’ hands and not put pressure on them.

The relatively small gesture of the bracelets – a protest against Qatar’s laws and attitudes towards LGBTQ+ groups – has become one of the biggest issues in a hugely controversial World Cup. The German federation has already accused FIFA of “extreme blackmail” in discussions and there were genuine fears that players such as Harry Kane, Virgil van Dijk and Gareth Bale would have been suspended.

Former US striker Eddie Lewis believes England can go one step further in Qatar 2022 and reach the World Cup final.

Gareth Southgate’s side, who play in their second Group B match against the US on Friday, reached the semi-finals of Russia 2018, losing to Italy on penalties in last summer’s Euro 2020 final.

The United States held Wales 1-1 in their opening game on Monday, while England made their best ever World Cup start by beating Iran 6-2 and Lewis said Southgate’s side will be “hard to stop”.

Captain England fit to play against USA after scan everything clear

Kane suffered a blow to his right ankle after a fumble challenge by Morteza Pouraliganji in England’s 6-2 win against Iran on Monday – the national team’s biggest ever win at the start of a major tournament.

The Spurs striker, who has a history of ankle problems, played on for a good 25 minutes but was seen limping after the match and went for a scan as a precaution.

But the 29-year-old was given the green light to train on Wednesday, with the official England Twitter account sharing a photo of him in training accompanied by the caption “skipper” and a fist emoji.

Jesus Valenzuela will referee England’s match against the US at the World Cup tonight.

The Venezuelan will take charge of his first match at the World Cup after being selected as one of 36 referees at the Qatar tournament.

The 39-year-old is regarded as one of the best referees in South America – he has taken charge of matches in the Copa America, Copa Libertadores, Copa Sudamericana and South American World Cup qualifiers.

He is a professional referee in Venezuela’s top flight, where he was in charge of nine games before the competition ended for the World Cup.

However, in those games, Valenzuela showed red cards in seven of them, as well as a series of yellow cards.

The early game of today’s World Cup action sees Wales take on Iran in Group B. Rob Page’s men drew against the USA in their opening game and hope to take it one step further against a side who were 6-2 down. was defeated by England.

Should Wales win this morning, they will move to the top of Group B ahead of England against the USA tonight and be one step closer to a place in the last 16.

Follow all the action with our live blog below. The kick-off is at 10 a.m.:

Gareth Bale wants to make it ‘even more special’ to become the most capped player in Welsh football history by leading Wales to World Cup victory over Iran.

Bale is poised to overtake Chris Gunter, who will be one of the substitutes for Friday’s encounter, to win his 110th cap at Ahmad Bin Ali Stadium in Doha.

Wales have been boosted by the return to fitness of midfielder Joe Allen, who has been out with a hamstring injury since mid-September, as they move into must-win territory following Monday’s 1-1 draw with the United States.

Bale, who made his Wales debut in 2006 and is his country’s record goalscorer with 41 goals, said: “I honestly haven’t really focused on the cap, I’ve just focused on the game.”

Gareth Southgate has revealed that the Football Association has handed over a report to FIFA to clarify perceived inconsistencies in penalties during the World Cup.

England were denied what appeared to be an obvious penalty when Harry Maguire was grabbed by Rouzbeh Cheshmi early on Monday in their 6-2 win over Iran.

The VAR decided not to intervene but later warned the referee for a shirt tug in the England penalty area leading to Mehdi Taremi scoring a last gasp penalty, while a similar offense resulted in a penalty kick in the shock defeat of Argentina vs Saudi Arabia. on Tuesday.

Pierluigi Collina, chairman of the Fifa refereeing committee, had selected England at a pre-tournament briefing – also open to the media – with a clip of Kalvin Phillips blocking to create space in the penalty area for Maguire to score in the 5 -0 England Albania World Cup qualifying win last year.

When England started playing the ball against Iran, they felt something different.

“Definitely a click,” said John Stones of the 6-2 win. “Or a desire to make things right. We had come out of a bad period.”

They can now see through to the other side. England scored more goals against Iran than in the entire Nations League campaign. However, the reality was that it was a step up from Gareth Southgate’s overall style rather than just the past eight months.

“I think people wouldn’t expect us to be like this after watching us for a few years and the way we play football,” the manager acknowledged. “Maybe we’ve fallen back to normal.”

The challenge now is to make it the norm and illustrate that it was not partly a product of Iran’s disorder; that England has made known their credentials.

The main news to watch out for as we go is Harry Kane’s fitness, any big calls from Gareth Southgate about changing the defense and, on the other side of the fence, the likely US line-up with Yunus Musah among those facing a fitness struggle.