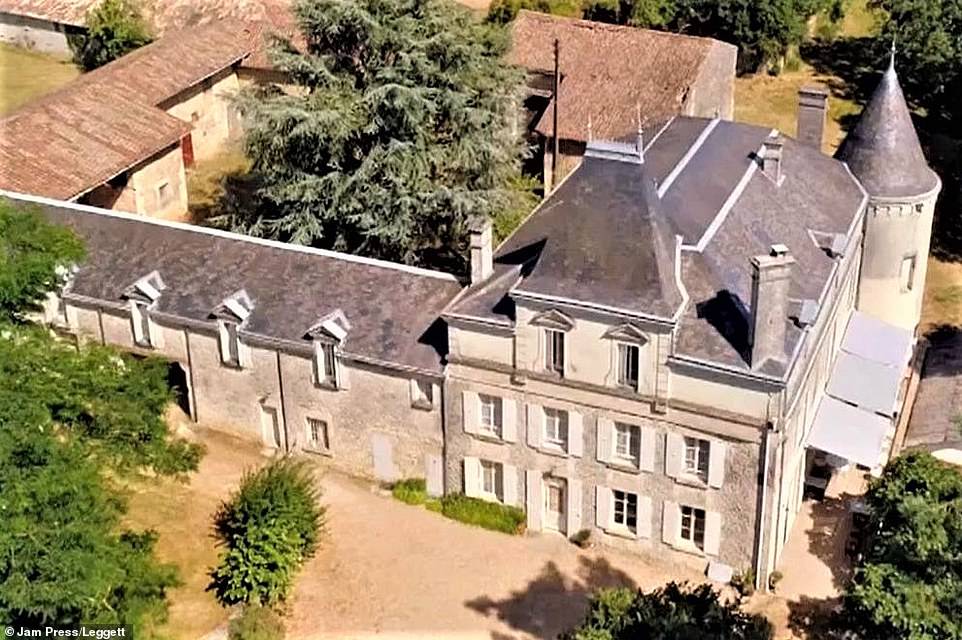 A nine-bedroom French mansion which appeared on the Channel 4 series Escape to the Chateau DIY is being sold.

The gorgeous property featured in the spin-off show from Escape to the Chateau, which starred colourful hosts Dick Strawbridge and Angel Adoree and ended earlier this month, and is situated in Saint-Maixent-l’ecole, western France.

The sprawling 19th century building – which has a vintage tea room, cinema area and hunting lodge – is being marketed by French estate agent Leggett Immobilier for roughly the same price as a one-bed apartment in central London.

Scroll down for video

Estate agent Leggett Immobilier has listed the sprawling property in Saint-Maixent-l’Ecole, western France, for £725,000 – around the same price as a central London flat. The property appeared on Channel 4’s Escape to the Chateau DIY, a spin-off show from Dick and Angel’s popular main series

The chateau has nine bedrooms and seven bathrooms including a bed and breakfast suite and even its own British food store.

Outside is a small lake with water-side wooden pavilion, a self-contained apartment, stables, cowshed, a large barn, a hunting lodge and more.

Just 30 minutes from the main town of the Deux-Sevres region, Niort, the estate agent says the chateau is ideally located for exploring the region – with plenty to see locally including the Marais Poitevin, Futuroscope and the beaches at the coast. 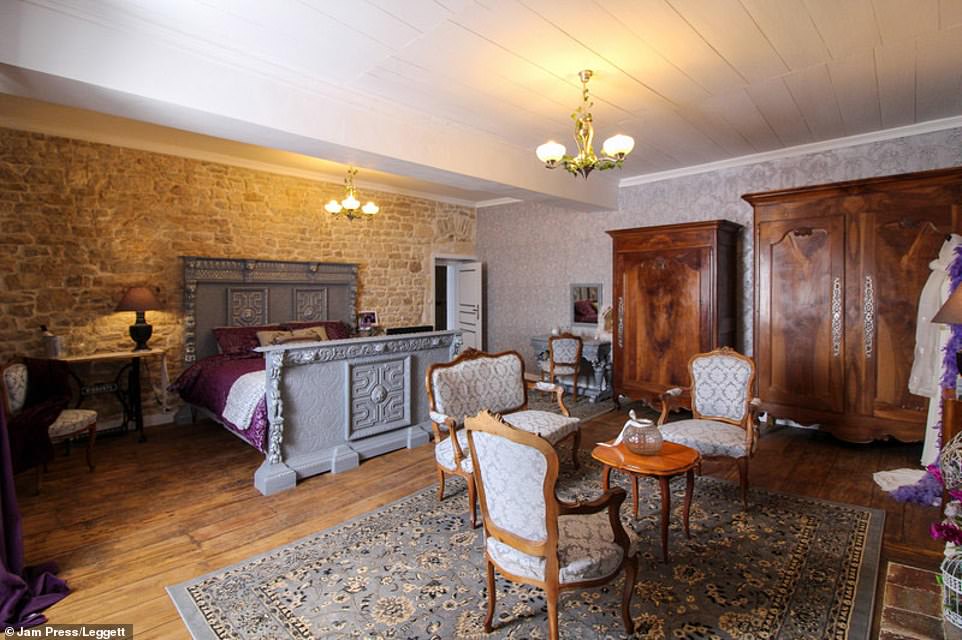 The agent’s description reads: ‘The chateau has been renovated to a very high standard by the current owners, who have worked hard to restore it to its rightful place in the hearts and life of the local community’ (Pictured: A bedroom in the chateau) 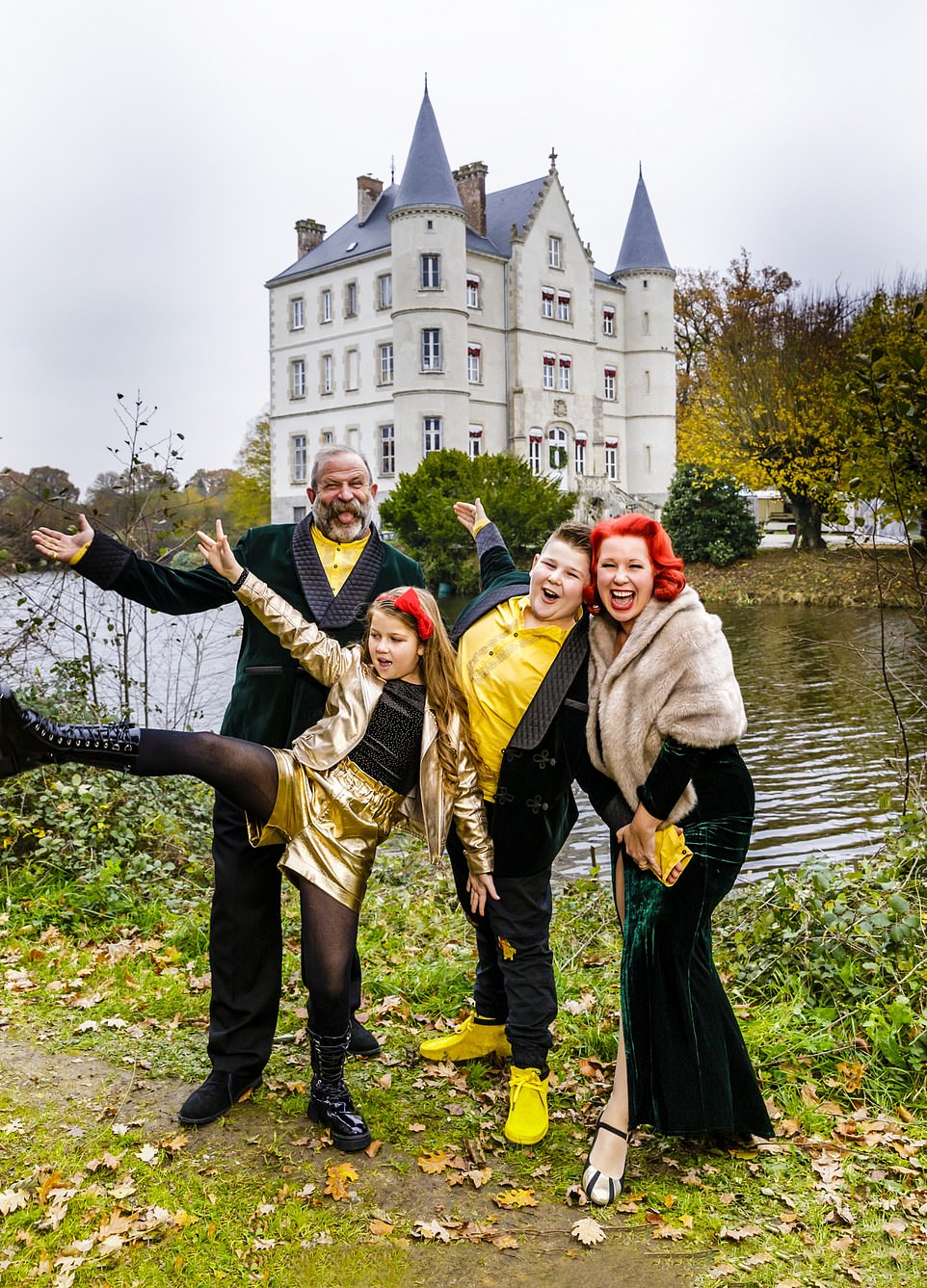 Dick Strawbridge and Angel Adoree, pictured with their two children Dorothy and Arthur, filmed their final episode of the main Channel 4 show, Escape to the Chateau, earlier this year 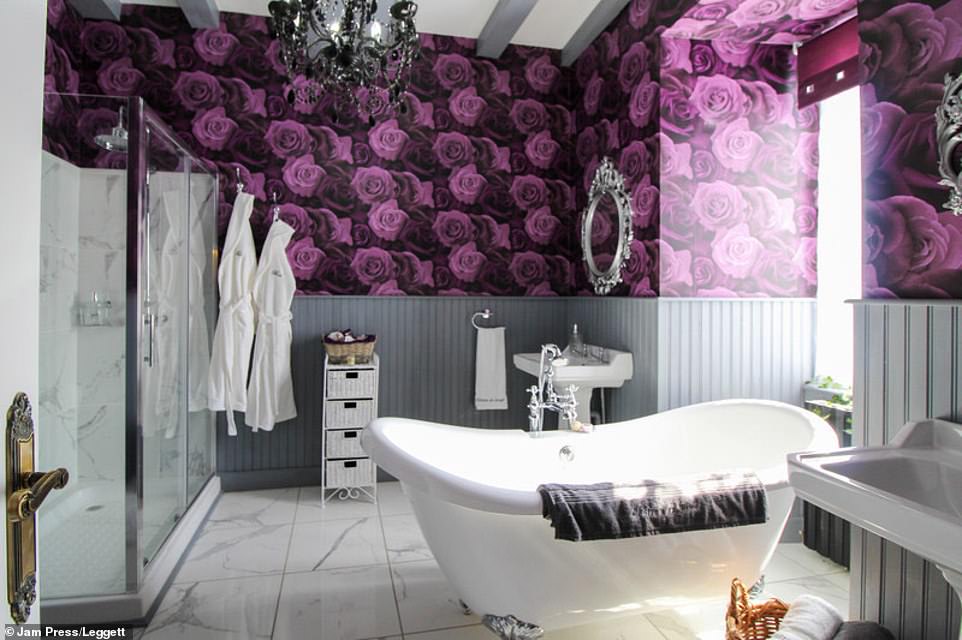 The chateau, which lies in Saint-Maixent-l’Ecole, western France, has nine bedrooms and seven bathrooms including a bed and breakfast suite and even its own British food store 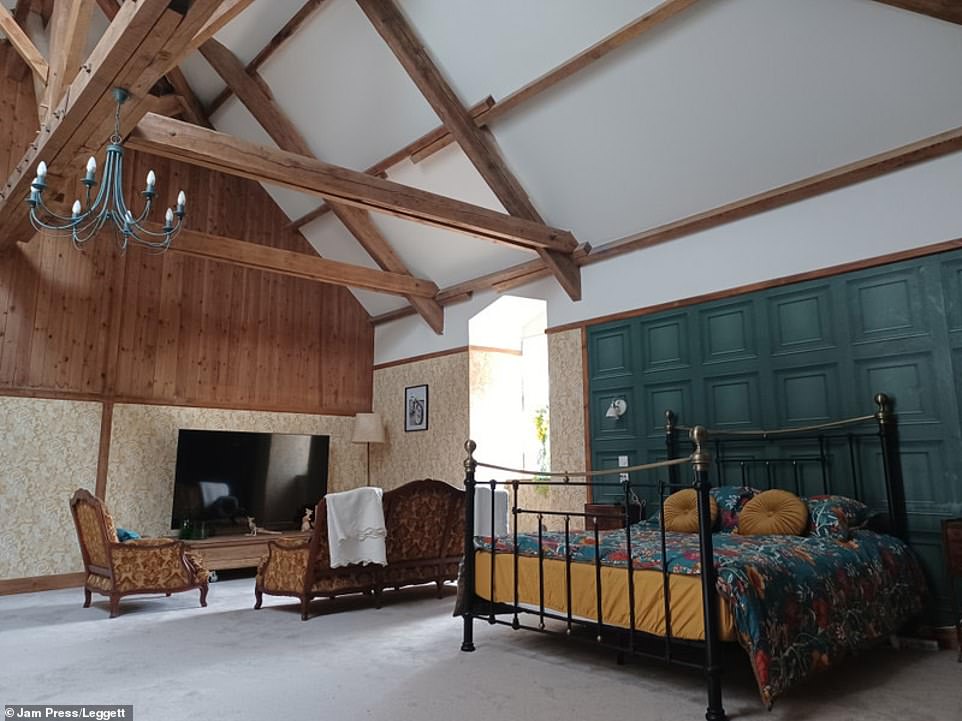 A bedroom in the property of the mansion, which could be a tempting prospect for a British buyer – with the chateau comparing favourably in price to many more modest homes in the UK 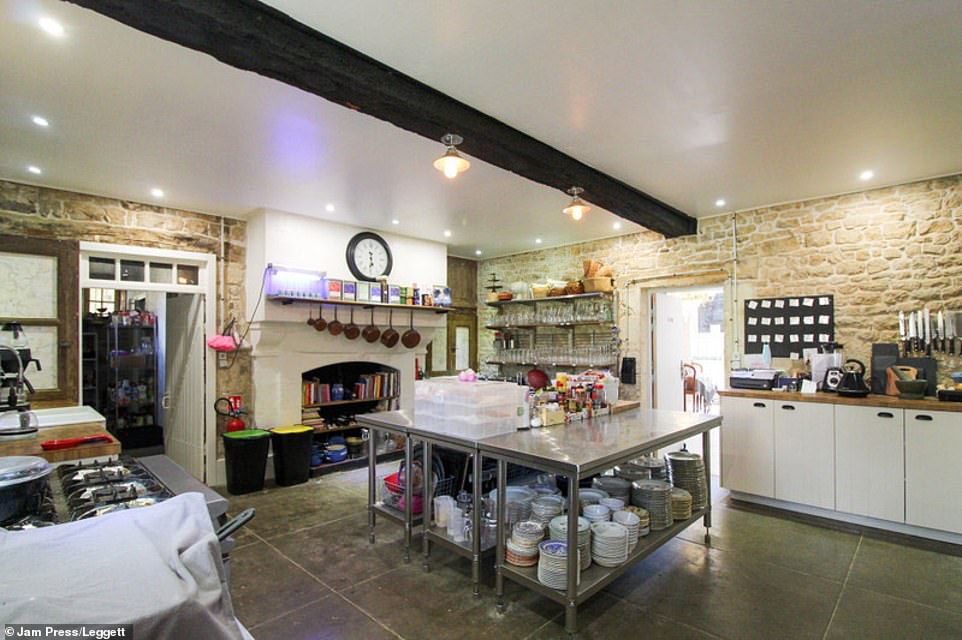 Self-sufficient: The property has a huge kitchen and a separate bed and breakfast 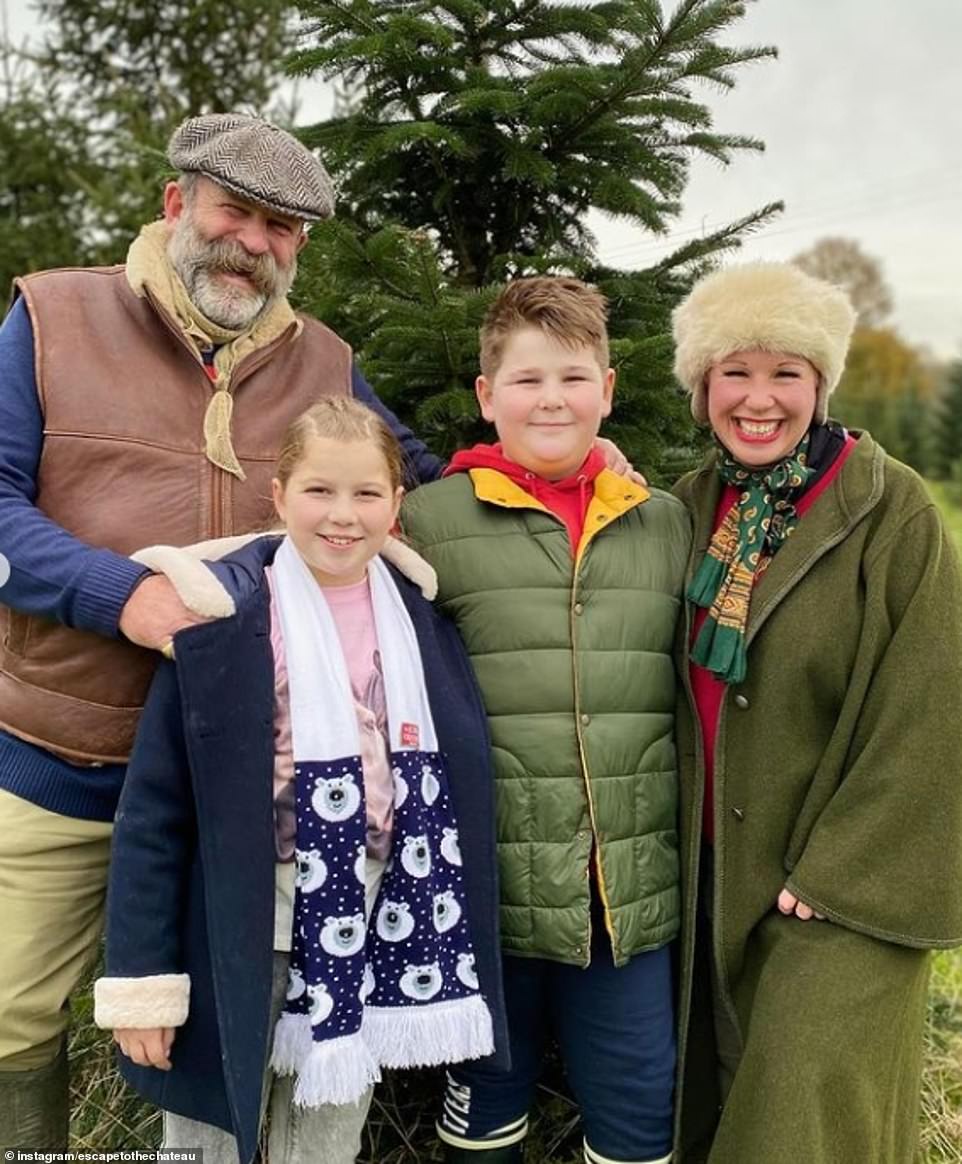 Dick Strawbridge and Angel Adoree bought their own run-down 45-room chateau for just £280,000 in 2015, with Channel 4 launching it’s popular series following the transformation in 2016 – it’s since been valued at £2million

The listing reads: “Recently restored, this beautiful residence is a magnificent family home while offering a wealth of options for a special events/accommodation activity.

‘The chateau is already well-known locally and further afield due to its starring role on Ch4’s Escape to the Chateau DIY.

‘It has been renovated to a very high standard by the current owners, who have also worked hard to restore it to its rightful place in the hearts and life of the local community. 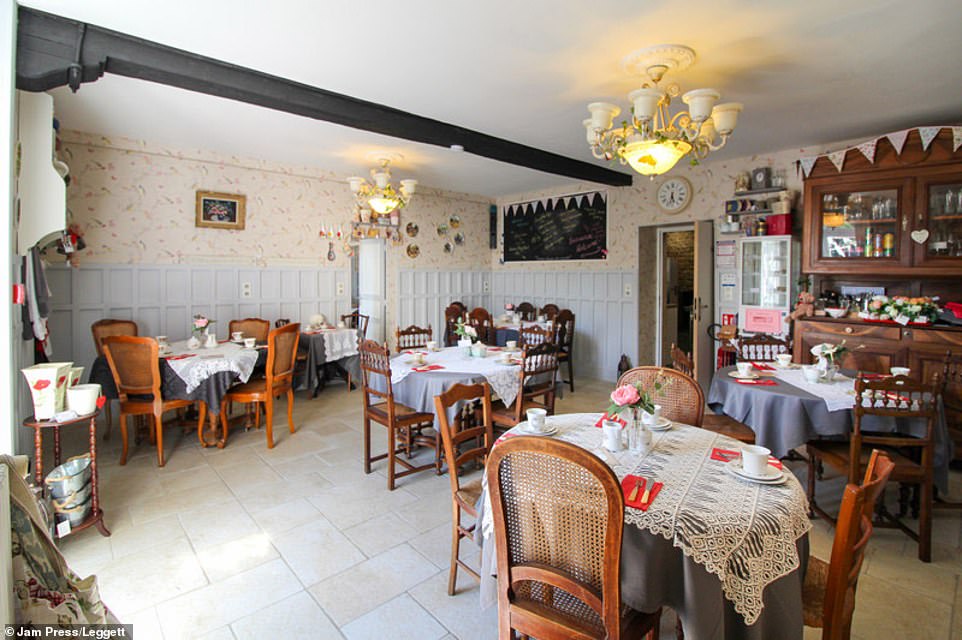 A cup of char? The English tearoom that the current owners installed in the property after renovating it 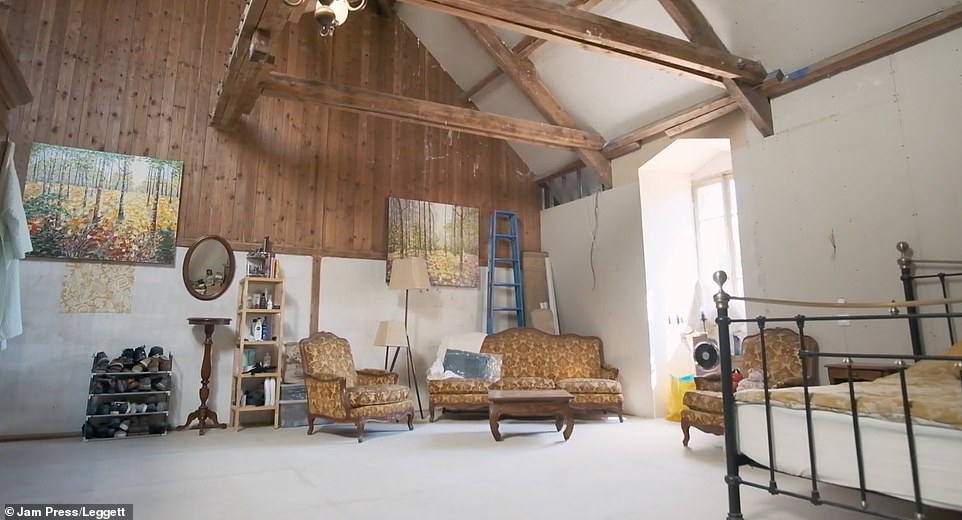 Despite transforming the property, the enormous chateau isn’t expected to fetch huge sums – with many similar French chateaux on the market 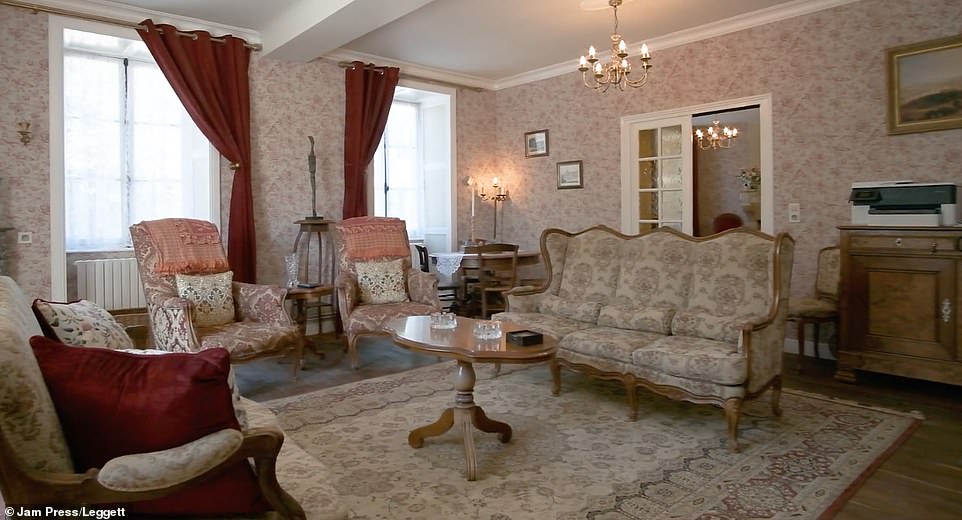 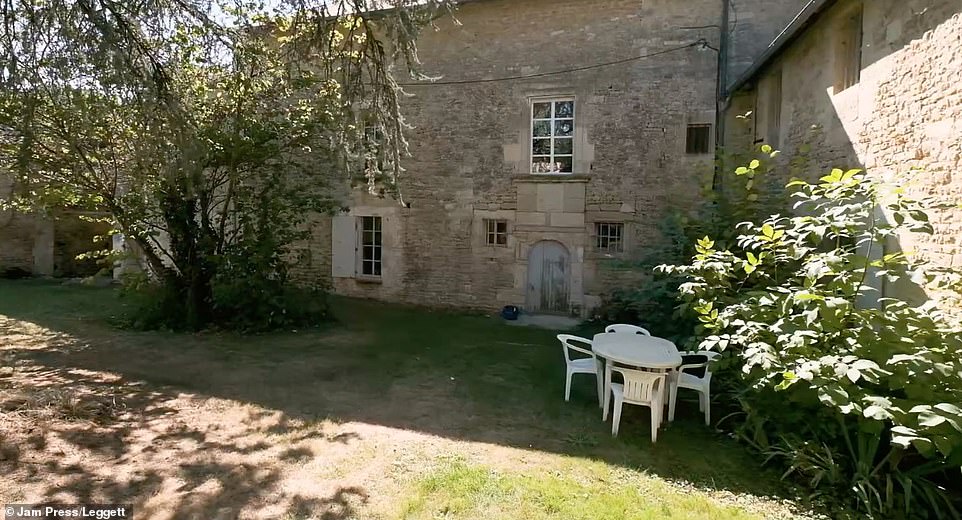 A outdoor courtyard at the historic home, which has expansive grounds 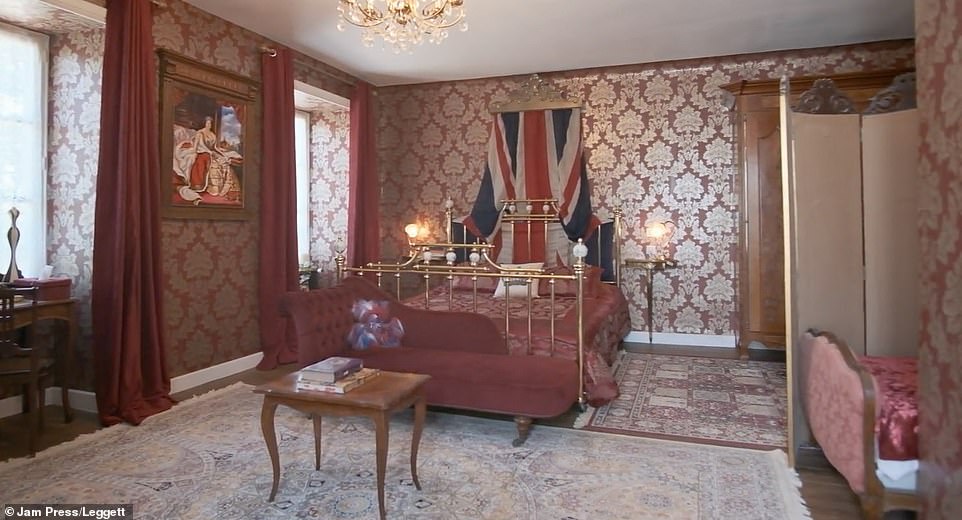 A slice of Britain on the continent: One of the bedrooms has a union jack hung above the headboard 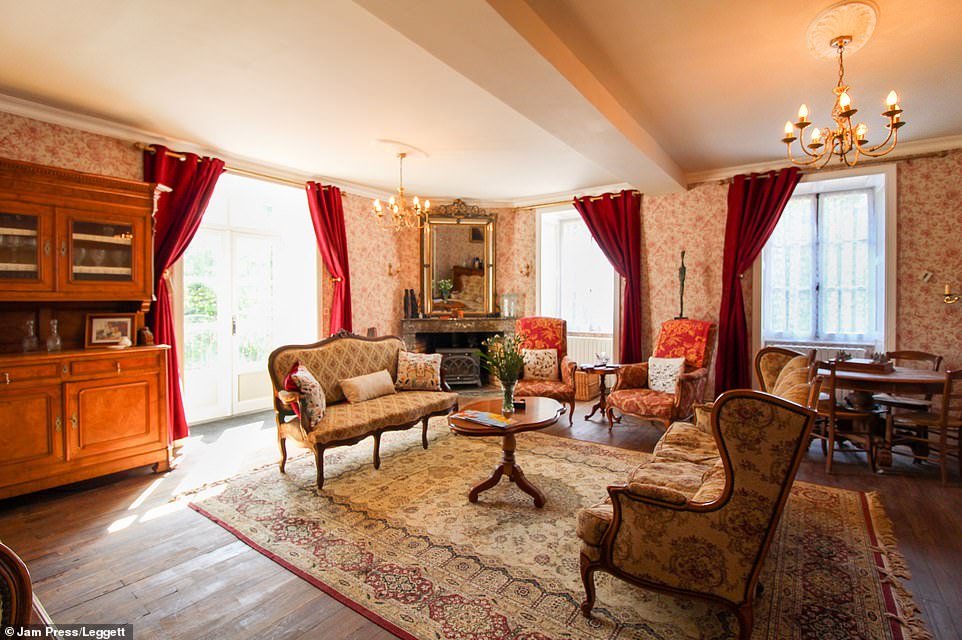 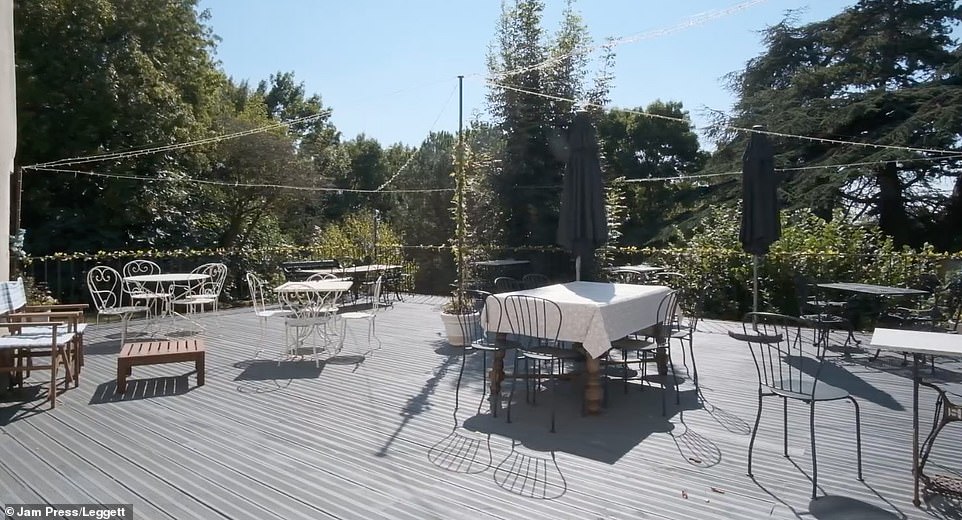 Tea on the terrace: Outside is a small lake with water-side wooden pavilion, a self-contained apartment, stables, cowshed, a large barn, a hunting lodge and more

‘Whilst preserving the original features, renovation work has included insulation, the creation of a self-contained apartment and studio/gite, together with its much-loved stylish Vintage Tea Room (fully licensed), Bed and Breakfast Suites and v popular British Food Store!

‘Architectural plans, and permissions to create a further six gites, a restaurant and a large reception room have already been obtained.’

Dick, 60, and Angel, 41, the stars of the main show have no plans to sell their own chateau but have hinted at new ventures.

The couple, who would charge up to £38,000 per wedding – with an average price at around £19,000, told the Radio Times’ View from My Sofa podcast their two children, Arthur and Dorothy, were key to making the decision to end the show and start afresh.

They said: ‘The children are turning nine and ten. They’ve had an innocence and joy in what we’ve done.

‘We’ve got lots of things we still intend to do, but we want to protect the family part of it.

The couple transformed the fortunes of their historic property after snapping it up while it was in need of a complete overhaul.

Dick is a retired Lieutenant Colonel in the Army who was previously most famous for hosting the Scrapheap Challenge. Angel is the founder of The Vintage Patisseries, a glamorous hospitality company. She appeared on Dragon’s Den in 2010 and was offered an £100,000 from Deborah Meaden and Theo Paphitis for developing her website and business. Angel married Dick – whom she met through their shared agent – in November 2015. 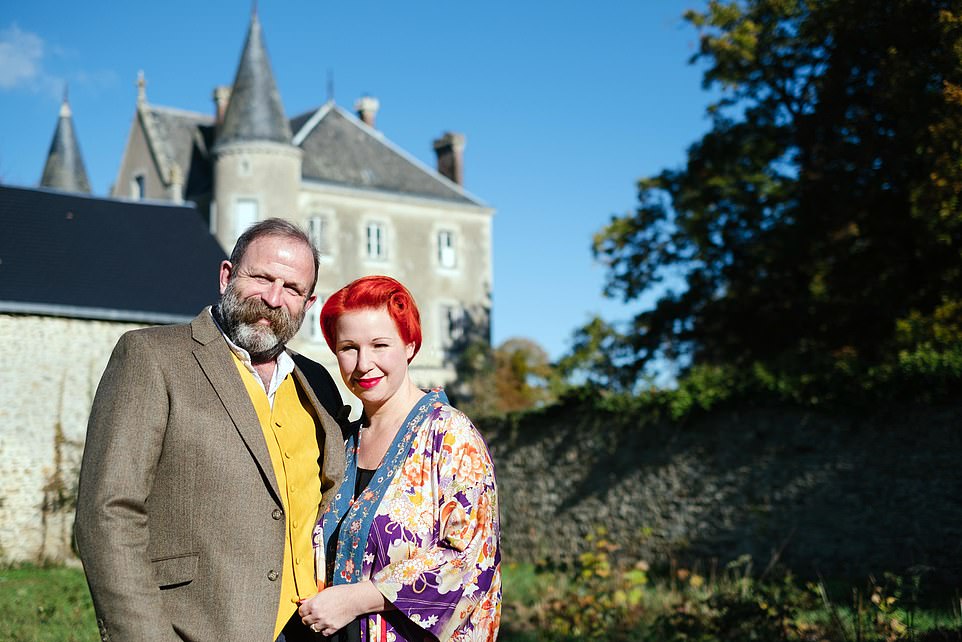 The original Escape to the Chateau series was coined in 2014 after an executive at Spark Media heard that Angel and Dick (pictured in 2016) were leaving their two- bedroom flat in Southend, Essex, for a new life in France

The series was coined in 2014 after an executive at Spark Media heard that Angel and Dick were leaving their two- bedroom flat in Southend, Essex, for a new life in France.

After searching for the chateau for four years, the pair bought the sprawling 19th century building in 2015 after swapping their two-bed home in east London.

The mansion is called Chateau-de-la-Motte Husson and it is in the picturesque Loire region of North West France around 200 miles from Paris.

When they moved in, the property had no electricity, heating or water – and a sanitation system that was emptied in the moat. 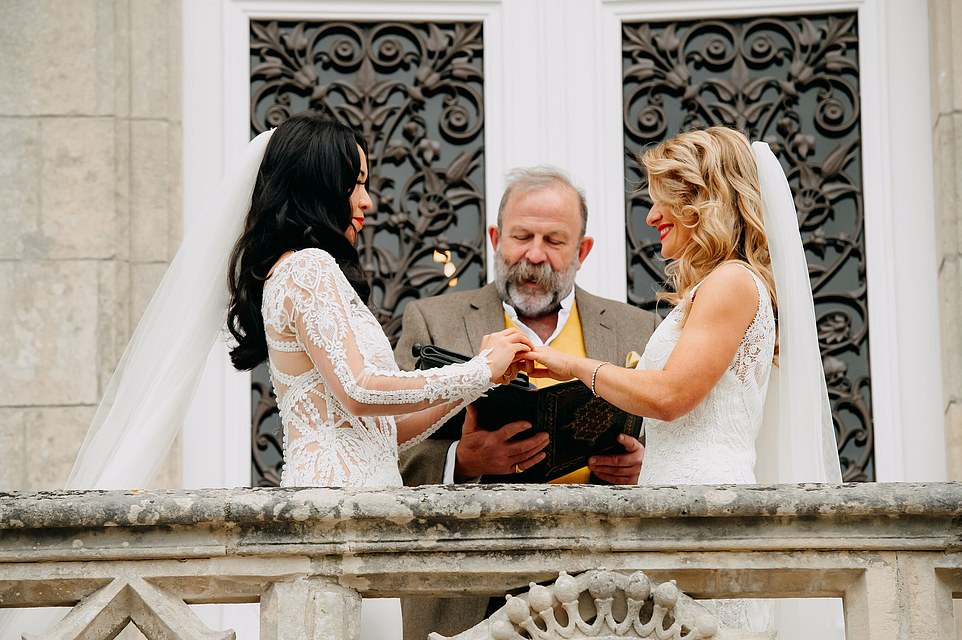 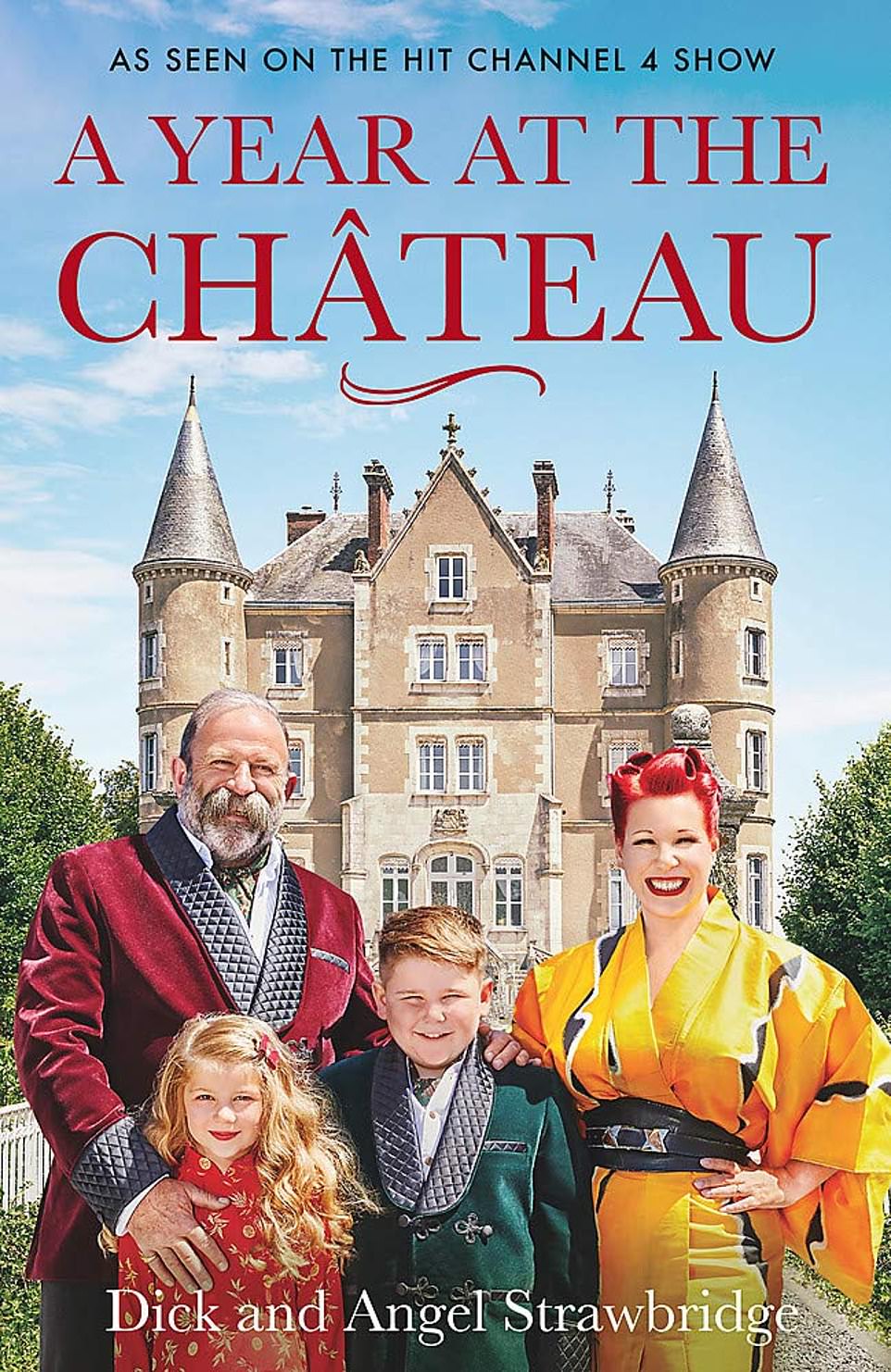 Dick and Angel also enjoyed a booming merchandise business off the back of the show, with a number of books available

Now the venue boasts a grand reception room which can host up to 200 people, or the salle à manger which can seat 12. The decadent orangery holds 80 people for a wedding breakfast.

A six-course wedding dinner plus canapes upon arrival, a cheese and meat table during the evening and an unlimited full bar for the day for the maximum 80 guests cost £20,000, a post-wedding brunch £1,600 and hiring the chateau for the weekend is £6,250.

As well as weddings, the couple also sold glamping nights for £350 in ‘geodesic domes’ in the chateau’s grounds and £230 ‘days of decadence’ where you can meet Dick and Angel, enjoying lunch and afternoon tea at the chateau.

And the couple even charge guests £75 for a ‘working day in the garden’, with the website saying: ‘Yes to be frankly honest we are charging you to come and work! And in return you have to help make the place beautiful!’.

The chateau has since been valued at £2million but the couple also cash in through TV rights from Channel 4 for the series and its day-time spin off.

Channel 4 made nine series of Escape To The Chateau and the popular show got almost 3 million viewers every Sunday night – making it one of the channel’s biggest hits. 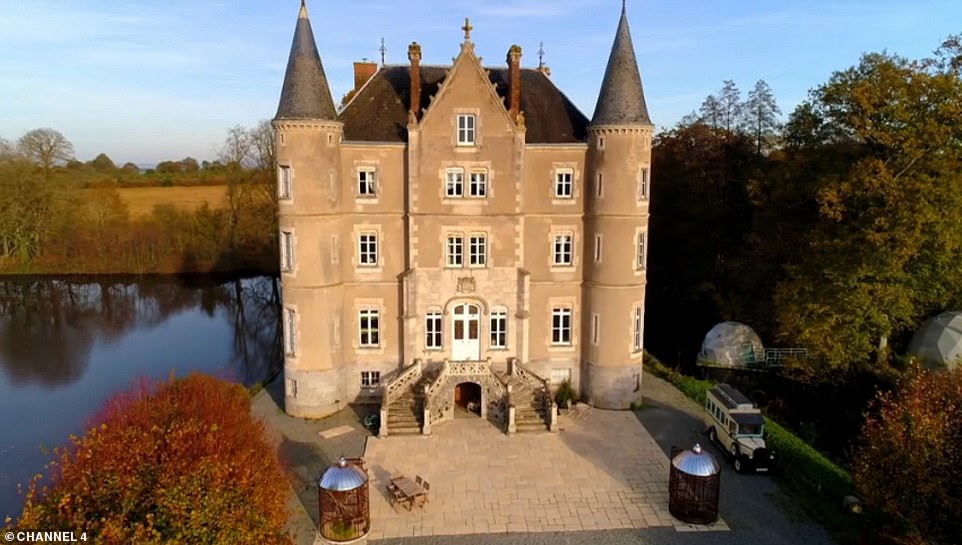 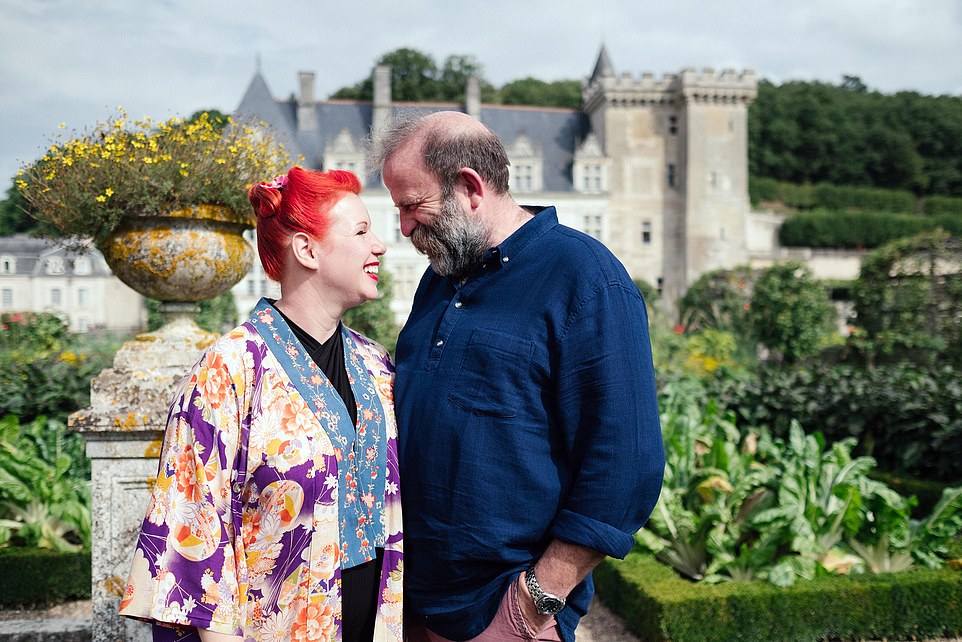 At the end of series one, which aired in June 2016, the relationship between the Strawbridges and the original Spark Media production crew had become dire 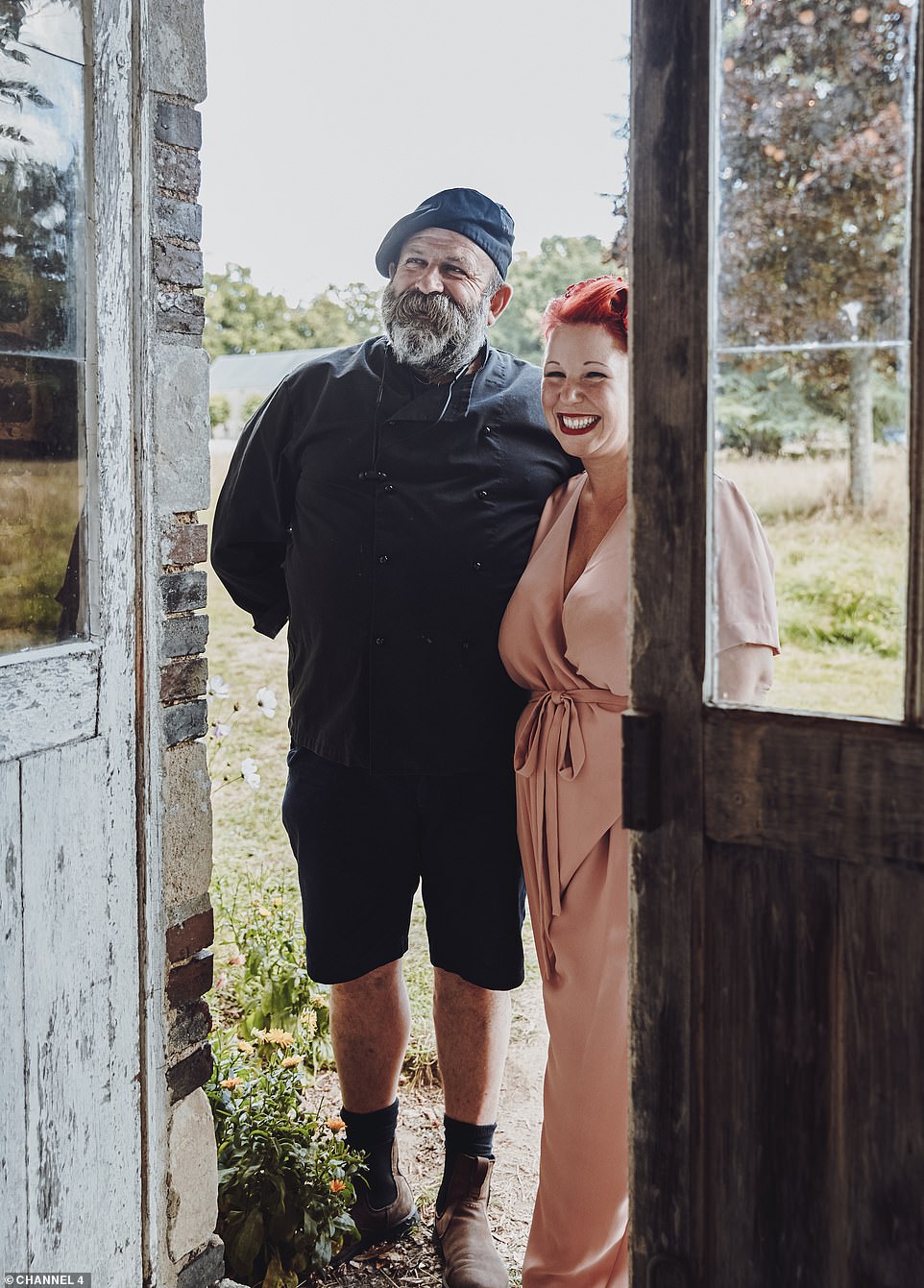 The series continued, and by the end of filming series four, in 2017, Spark Media set up a separate production company, Kindling, through which they produced ETTC, with none of the original team

How much does a wedding at the chateau set you back?

The full run-down of the costs a wedding weekend for 80 at the chateau include:

At its peak, its audience is 50 per cent higher than Channel 4 normally get in the same slot – but the series wasn’t without controversy.

There have since been claims that from the start, sources claim, the couple — reportedly paid thousands per episode — wanted control.

Dick, insiders said, believed his previous forays in television convinced him he could do better than the crew. ‘He’d say, ‘Put your camera there, or follow that.’ They’d say how f*****g useless we were,’ a source told in 2021.

One thing that is clear is that at the end of series one, which aired in June 2016, the relationship between the Strawbridges and the original Spark Media production crew had become dire.

The couple reportedly said they would only allow Spark Media to carry on making the series if the show’s director was no longer involved.

As the Spark source depicts it: ‘When Channel 4 gave in to Angel’s request to get rid of him it was like they had the power to continue this approach to anyone they didn’t like . . . Channel 4 let them get away with anything.’

To which Dick and Angel’s representatives retort: ‘My clients made it clear from the outset that only those who were competent and respected the sanctity of our family should work in their home; as they were fully entitled to do.’

The series continued, and by the end of filming series four, in 2017, Spark Media set up a separate production company, Kindling, through which they produced ETTC, with none of the original team.

Goodbye Escape to the Chateau! As the final episode airs, how Dick and Angel’s transformation of a £280,000 mansion became Channel 4’s biggest hit – but faced claims of bullying and violence on set

Escape to the Chateau stars Dick and Angel say it was ‘really emotional’ filming the final episode their son, Arthur, 9, broke down in tears