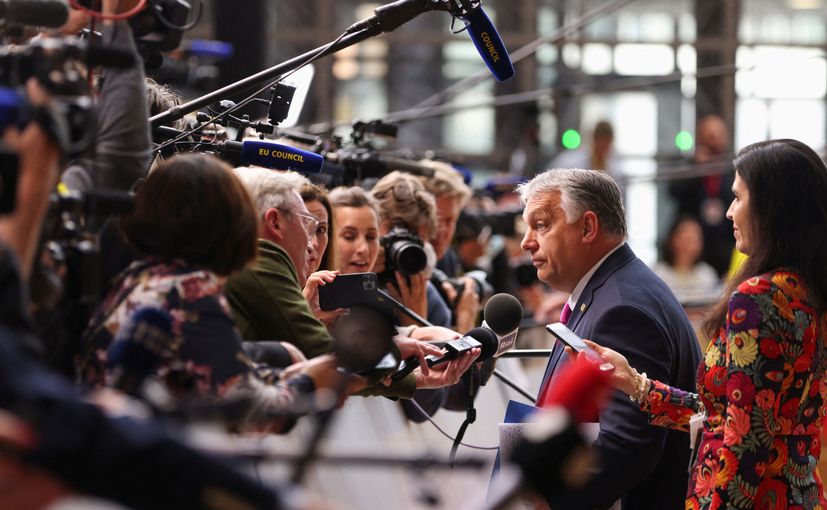 The target to reduce all Russian imports by 90% by the end of 2022 includes deliveries by sea as well as Poland and Germany halting their own pipeline imports of Russian oil.

European Union leaders have agreed to an embargo on imports of Russian oil which will begin to come into force towards the end of the year and which exempts, for the time being, pipeline imports on which Hungary and two other landlocked states in Central Europe.

The toughest sanction yet imposed on Russia for its invasion of Ukraine, agreed overnight after weeks of wrangling, aims to withdraw 90% of Russian imports of crude into the 27-nation bloc by the end of the year, senior officials said.

Two-thirds of Russian oil imported by the EU passes through tankers and one-third through the Druzhba pipeline.

The maritime import ban will be imposed with a phase-in period of six months for crude oil and eight months for refined products, a European Commission spokesperson said.

This means that the target for refined products is effectively at the start of 2023 rather than the end of this year, since this TUSEN would come into effect once the sanctions are officially adopted, with EU states aiming to do so this week.

The target to reduce all Russian imports by 90% by the end of 2022 includes deliveries by sea as well as Poland and Germany halting their own pipeline imports of Russian oil, which they are committed to doing.

The remaining 10% would be temporarily exempt from the embargo so that landlocked Hungary, Slovakia and the Czech Republic would have access to Russian oil from the Druzhba pipeline.

Oil prices extended their bull run after the EU deal, stoking concerns over inflation, which hit a record high of 8.1% year-on-year in eurozone countries this month. ci, Eurostat said on Tuesday.

With energy prices soaring, leaders will ask the EU’s Executive Commission to explore ways to rein them in, for example through temporary price caps, according to draft conclusions from their summit.

The draft, which could change before its adoption, would also task Brussels with working on possible reforms of the European electricity market – a decision supported by countries like Spain and Greece, but to which countries like the Germany objected.

Leaders are also expected to endorse a Commission plan to wean itself off Russian fossil fuels within a few years through faster deployment of renewables, energy-saving improvements and more investment. in energy infrastructure.

And they will call for better EU-wide contingency planning for further gas supply shocks. Moscow cut off gas supplies to the Netherlands on Wednesday for refusing to comply with a demand to pay gas in rubles, after already cutting off Poland, Bulgaria and Finland.

NEXT TARGET OF RUSSIAN GAS?

The oil embargo deal follows a previous ban on Russian coal and allows the bloc to impose a sixth round of sanctions that includes removing Russia’s largest bank, Sberbank, from the international SWIFT system.

See also  Europe now - Poland and Hungary: in the shadow of war in Ukraine

But while several countries already want work to start on a seventh round of sanctions, Austrian Chancellor Karl Nehammer said: “Gas cannot be part of the next sanctions”.

Europe is heavily dependent on Russian gas, which is why it has so far been excluded from EU sanctions. The EU this month passed a law requiring countries to fill gas storage to at least 80% before next winter, in a bid to create a buffer against supply disruptions.

“Russian oil is much easier to offset…gas is completely different, so a gas embargo won’t be an issue in the next sanctions package,” Nehammer said.

TVS Ronin Launching Tomorrow: What We Know So Far

Planning to Buy a Used Maruti Suzuki Ignis: 7 Things You Need to Know

Are you planning to buy a used Renault Kwid? Here are some pros and cons

Zoey Deutch dares to show off her abs in a black...