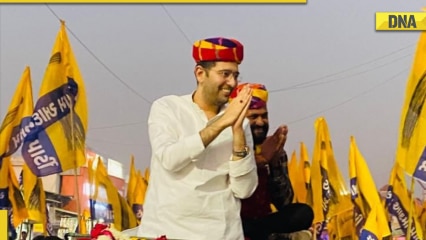 The Aam Aadmi party, moving forward with its victory chariot in the Gujarat elections, has become the first choice of the people of Gujarat today. From national leaders to Aam Aadmi Party workers, everyone is working day and night to bring about change in Gujarat. Rajya Sabha MP from Aam Aadmi Party and Gujarat state co-responsible Shri Raghav Chadha have held large public rallies and rallies in various parts of Gujarat in recent days. Today Shri Raghav Chadha took part in a big roadshow in Sanand. Thousands of people took part in the roadshow organized by the Aam Aadmi Party. It is evident from the unprecedented support of the people that change will be brought to Gujarat.

Addressing thousands of people at the roadshow, Aam Aadmi Party Rajya Sabha MP and Gujarat co-incharge Raghav Chadha said, “If the people of Gujarat want to avoid inflation today, they have only one solution and that is Shri Arvind Kejriwal, Aam Aadmi Party and broom.On the one hand there is the double engine inflation of the government and on the other hand there is Shri Arvind Kejriwal’s gift of ₹30,000 every month to every Gujarati family.After the formation of the government of Aam Aadmi party , from March 1, every family in Gujarat will get 300 units of electricity for free per month which means saving ₹ 4,000 per month If there are two children in a family, they will get free world class education in government schools which means every family saves ₹10,000 which they spend on education.”

He continued, “Apart from this, medicine, treatment and surgery will all be free. Good local clinics will be built, good government hospitals will be built, be it medicine for ₹100 or surgery for ₹1,00,000, all costs will are borne by the Kejriwal government of Gujarat.That is, ₹7000 spent on health services of each family will be saved every month.With this, if there are 2 unemployed youths in a family, then until the government does not provide them with employment, get each unemployed person will receive unemployment benefit of ₹3000 per month which means there will be benefit of ₹6000 per family besides Shri Arvind Kejriwal has decided to give a gift to women as well ₹1000 if every woman will get financial aid fee to women. That is, if there are 3 women in the house, each house will get a profit of ₹ 3000. If we add up all the gifts from the Aam Aadmi party, then The rule ring of Shri Arvind Kejriwal is going to give a benefit of ₹30,000 per month to every Gujarati family.”

He then said, “On one side there is a government of double inflation of BJP’s dual engine and on the other hand there is a government of Shri Arvind Kejriwal’s new engine with the benefits of ₹30,000. Today both these things are present for the people of Gujarat and the people have to decide.Today in every survey of Gujarat it is clearly visible that this time the election battle is going to be between BJP and Aam Aadmi party.Congress is nowhere in the picture as it gets less than 5 seats.In the struggle of Aam Aadmi party against BJP seems to be ahead of Aam Aadmi party.Because old Congress voters are inclined to vote for Aam Aadmi party and BJP voters and even BJP workers are voting this time also on the Aam Aadmi Party And such people, who have only decided who to vote for in the last week of the election, after seeing the atmosphere have also decided that this time they should vote only for the Aam Aadmi Party .’

He added: “So this time, people of all castes, religions and communities are going to vote for Aam Aadmi Party in the name of change. The great thing that happened in Delhi and Punjab is now going to happen in Gujarat too”. The people of Gujarat will uproot the 27 year old corrupt and arrogant government and bring change. And change means Aam Aadmi party, change means Shri Arvind Kejriwal, change means broom. Today I would like to appeal to all the voters of Gujarat that on the election day, everyone should go to the polling booth and take their responsibility and make the right decision for their future and for the future and fate of their children. Vote for the Aam Aadmi party this time in the name of change.”

He concluded, “When our government in Punjab was about to be formed, people used to say that the government of Punjab is in debt of three lakh crores, so from where are you going to give free electricity? We started to give free electricity to the people of Punjab within 3 months of government formation also in Delhi we have provided free electricity for 7 years the meaning is clear whether it is Gujarat government or any other government there is no shortage of money in any government anyway , there is only a shortage of good intentions among the leaders. Such a misconception is created that Aam Aadmi party distributes free gifts, which makes people addicted to free gifts. On this I would like to say clearly that there are two types Being Revdi in One is the Revdi or Aam Aadmi Party which Shri Arvind Kejriwal gives in which every family gets free electricity for decent life, get good education, good bra and on the other hand there is BJP’s Revdi in which Chief Minister gets 5,000 units of free electricity, free air and train travel and members of parliament get houses and all facilities. Now the public has to decide whether they like BJP’s Revadi or Shri Arvind Kejriwal’s Revadi.”