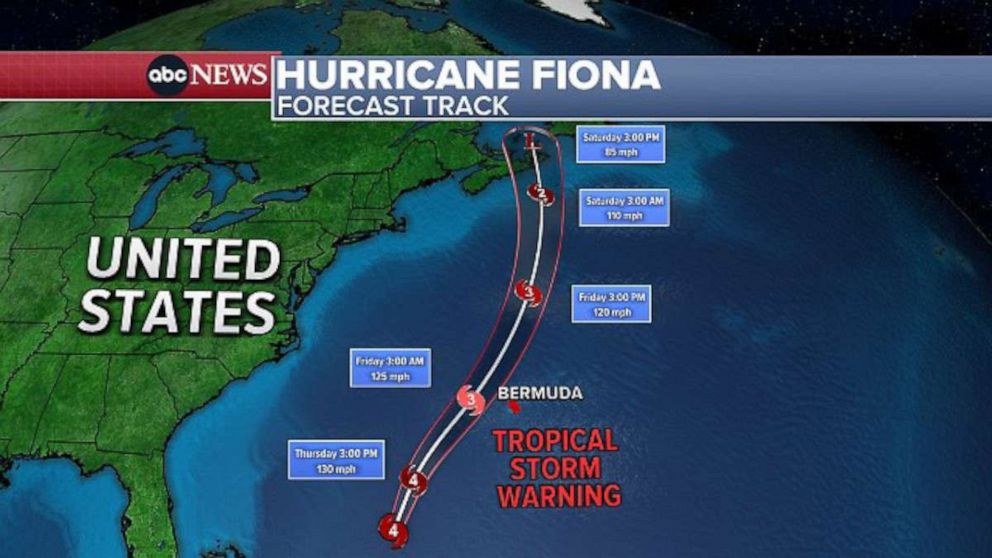 Hurricane Fiona, now a monster Category 4 storm with winds of 130 mph, is targeting Bermuda as hard-hit Puerto Rico appears to be recovering.

A hurricane warning is in effect for Bermuda, where tropical storm conditions are expected to begin Thursday evening.

Hurricane conditions are possible at night, depending on how close Fiona passes to the island.

As Fiona heads north, the east coast of the United States may see an increased threat from rip currents, along with choppy surf.

Hurricane watches are in effect for Nova Scotia, Newfoundland and Prince Edward Island.

As Fiona moves forward, Puerto Rico appears to be recovering from the storm that swept across the island this week, killing several people, cutting power and destroying the water supply.

The flooding was catastrophic, with Fiona dumping up to 12 inches of rain.

President Joe Biden has approved a disaster declaration for US territory.

A tropical wave known as Invest-98L has a 90% chance of developing in the next five days.

It will move into the western Caribbean this weekend, where conditions will be ripe for tropical development. The tropical wave is headed for the warmest water source in the Atlantic basin, giving it the potential to become a significant hurricane.

After this weekend, models will go split. Most models take the storm into the Gulf. Some models predict a strong storm moving through Cuba and off Florida’s east coast, while a few models track a weaker storm toward Central America.

Riley Winch and Max Golembo of TUSEN News contributed to this report.

EXPLAINER: A Deep Dive Into Risks For Submarine Cables, Pipes

EU to introduce windfall tax, but no deal on gas price cap