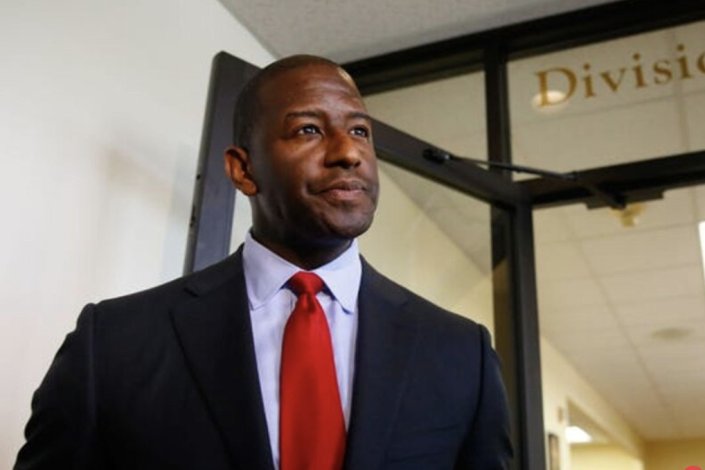 Andrew Gillum, former mayor of Tallahassee and Democratic candidate for governor, has been indicted on federal charges involving campaign contributions he and his associates illegally solicited from undercover FBI agents during a lengthy investigation into public corruption in Tallahassee.

One of Gillum’s closest advisers, Sharon Lettman-Hicks, was also charged in the 21-count indictment. Lettman-Hicks recently qualified to run for the Florida House seat in District 8.

Gillum, 42, and Lettman-Hicks, 53, were arrested by the FBI on Wednesday, although they were cleared to surrender. In their first appearance that afternoon at the U.S. courthouse in Tallahassee, Gillum and Lettman-Hicks pleaded not guilty to federal public corruption charges.

Gilllum entered the courtroom in leg shackles and handcuffs with a chain around his waist. U.S. Magistrate Judge George Stampelos ordered conditional bail for Gillum and Lettman-Hicks.

The trial is scheduled for August 16, although that date will almost certainly be pushed back.

The ABCs of Andrew Gillum: Everything you need to know about the ups and downs of a former rising star

Timeline of issues: How Andrew Gillum got involved in an FBI investigation and an ethics inquiry

The crash of a former rising Democratic star

The charges marked an explosive development in the federal government’s investigations into public corruption in Tallahassee and another dark chapter in the life of Gillum, who once seemed to lead an enchanted political existence.

He was first elected to the Tallahassee City Commission in 2003 when he was just 23 and won the mayoral race in 2014 with overwhelming support. He became a rising Democratic star and was briefly mentioned as a running mate by Hillary Clinton’s campaign.

He ran for governor in 2018, securing the Democratic nomination in an upset but narrowly losing to Republican Ron DeSantis.

The FBI began investigating a who’s-who of Tallahassee politicians, including Gillum, in 2015. And while former city commissioner Scott Maddox and others were later charged, Gillum appeared to evade charges until now.

A cover collection: Catch up on five years of coverage of the sting operation by The Tallahassee Democrat

“There was a target behind my back”

The federal grand jury issued a sealed indictment against Gillum and Lettman-Hicks on June 7, according to court records. It was ordered unsealed on Wednesday.

Gillum and Lettman-Hicks were charged with 19 counts of wire fraud and one count of attempt and conspiracy to commit mail fraud. Gillum was also charged with making false statements for allegedly lying to the FBI during a June 2017 interview, shortly after announcing his candidacy for governor of Florida.

The U.S. Attorney’s Office for the Northern District of Florida said in its announcement that Gillum and Lettman-Hicks conspired to commit wire fraud between 2016 and 2019. They illegally solicited and obtained funds from undercover FBI agents and others “through false and fraudulent promises and representations”. that the funds would be used for legitimate purposes,” the government said.

Gillum, who served as mayor from 2014 to 2018 after more than a decade as city commissioner, denied any wrongdoing in a prepared statement released as part of his campaign.

“I have spent the last 20 years of my life in public service and I continue to fight for the people,” Gillum said in a prepared statement. “Every campaign I’ve run has been run with integrity. Make no mistake, this case isn’t legal, it’s political.”

Gillum went on to say, “Throughout my career, I have always stood up for the people of Florida and spoken truth to power. There’s been a target on my back since I became mayor of Tallahassee. They found nothing then, and I have full confidence that my legal team will prove my innocence now.

“The government got it wrong today,” the lawyers said. “The evidence in this case is clear and will show that Mr. Gillum is innocent of all charges. We look forward to bringing this matter to an end and giving Andrew and his family peace of mind once and for all.”

The Gillum investigation, which has been chronicled for years by the Tallahassee Democrat, involved the same undercover FBI agents posing as out-of-town developers willing to bribe local authorities to advance their alleged real estate deals.

According to the latest indictment, former lobbyist and former Gillum friend Adam Corey suggested one of the officers pay for dinner during a fundraising campaign for his governor’s political committee, Forward Florida.

Corey, identified in the indictment as Individual A, organized the fundraiser in April 2016. The undercover officer paid $4,386 for the dinner.

The indictment also referenced a notorious August 2016 trip Gillum took with Corey and others to New York, where they chatted with undercover officers.

The indictment says the FBI paid for Gillum’s room at the Millennium Hilton, tickets to the ‘Hamilton’ Broadway show, food and drink and a boat ride to the Statue of Liberty. . Gillum, however, never reported the gifts as required by state law.

Those interactions led to state ethics charges and a $5,000 fine against Gillum, who pleaded guilty to avoid the public spectacle of an ethics trial. News of the FBI investigation and his intersections with Gillum plagued him during his 2018 campaign for governor, which he lost to DeSantis by an estimated 32,000 votes.

See also  'She was like God's angel': Family of murdered Pittsburgh mother of 3 mourns horrific loss

The indictment also states that an associate of Gillum identified only as Individual B discussed a $25,000 campaign donation with the undercover agents that would be channeled through the counsel to Lettman-Hicks, P&P Communications. Individual B later offered $75,000 for Gillum’s support of three different projects.

One of the officers met with Gillum in March 2017 in Tallahassee to discuss real estate projects and campaign donations, according to the indictment. The agent offered to donate $100,000 “if a certain project was viable.”

“Gillum told (the agent) that he (he) should separate campaign contributions and Tallahassee projects in his mind, then indicated that he looked favorably on (the agent’s) projects,” indicates the indictment.

In 2019, Gillum and Lettman-Hicks appeared to be under the cloud of an FBI investigation involving his campaign for governor. A federal grand jury in Tallahassee has issued at least one subpoena demanding records relating to his gubernatorial campaign and his political action committee, Forward Florida.

Lettman-Hicks, who qualified last week to run for the Florida House District 8 seat, was asked about the investigation during a recent interview with the Democrat.

“Nothing came of it,” she said.

Gillum walked away from politics after a March 2020 incident in which he was found passed out in a Miami Beach hotel room with two other men, one of whom was suffering from a possible overdose. Plastic bags containing suspected methamphetamine were found in the room, although Gillum denied ever using the drug.

Gillum and the FBI investigation:

Check back to Tallahassee.com for more on this breaking news.

Never miss a story: Subscribe to the Tallahassee Democrat using the link at the top of the page.

The Lesley Gore Archive, Open to All, Arrives at the New York Public Library