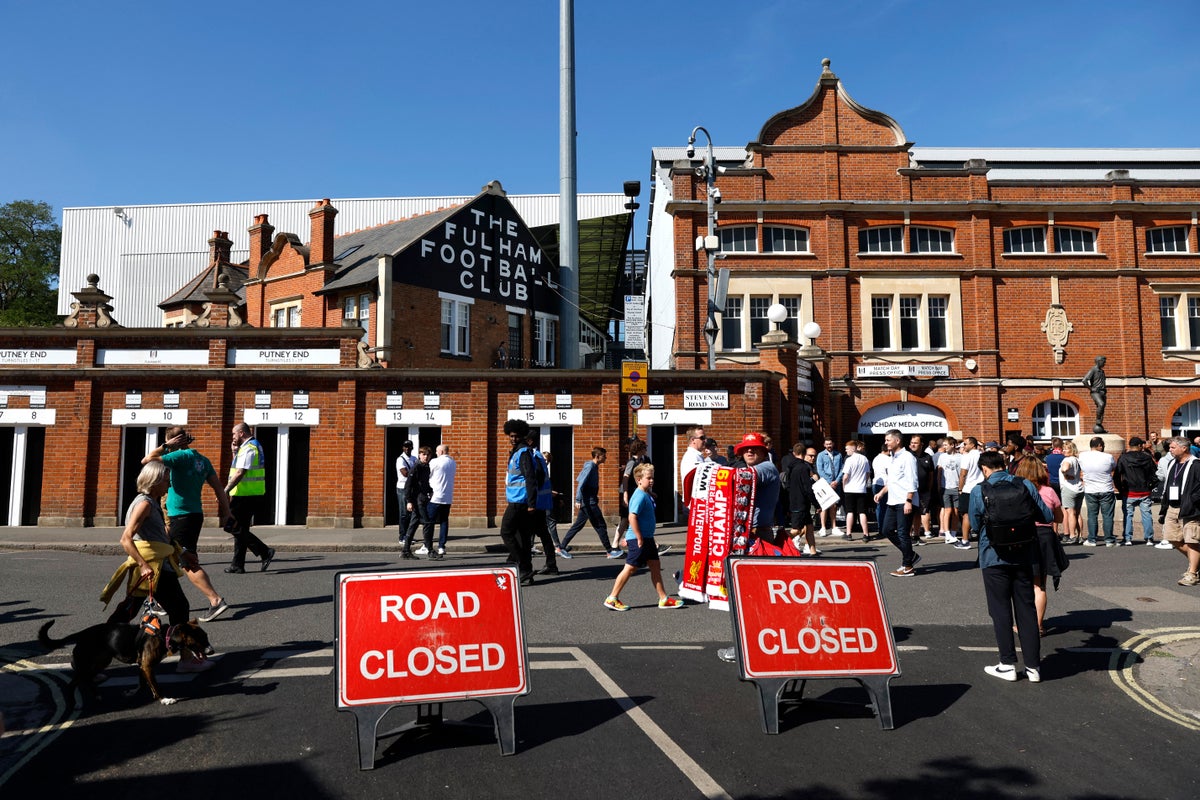 Follow live coverage as Liverpool travel to Fulham during the opening weekend of the 2022/23 Premier League season.

Jurgen Klopp’s Reds fell just one point and one place short of Manchester City in the title race last season and will begin their battle to do better this time against the newly promoted Cottagers on Saturday afternoon.

Centre-back Ibrahima Konate has joined an injury roster that already includes Alex Oxlade-Chamberlain (hamstring), Diogo Jota (thigh), Curtis Jones (calf), second-choice goalkeeper Caoimhin Kelleher (groin) and Kostas Tsimikas (knock), with Naby Keita also has a doubt. For the hosts, Marco Silva could take on Joao Palhinha as summer headliner for his Premier League debut, while last year’s top goalscorer Aleksandar Mitrovic hopes to pick up where he left off as they try to avoid the decline.

Jurgen Klopp thinks Mohamed Salah’s goals dried up at the end of last season as he was exhausted by Egypt’s defeat in the African Cup of Nations final.

Salah scored 31 goals in a season in which he was named PFA Player of the Year and Footballer of the Year, but only three came in his last 16 appearances.

Klopp believes the attacker has had an incredibly intense campaign, including 51 appearances for his club, two games of a World Cup play-off and all seven games in the African Cup of Nations, four of which went to extra time.

Fulham were unbeaten in both Premier League games against Liverpool in 2020/21, playing 1-1 at home and winning 1-0 at Anfield.

But the Cottagers have only won one of their last six Premier League home games against Liverpool – with one draw and four losses – that win was a 1-0 win in December 2011.

Klopp on excitement for new seasons

Jurgen Klopp says his team feels the same as most fans do now that the new season has arrived. It’s a mix of excitement, nerves and anticipation.

“Ours is no different. We never know what will happen.” said the Liverpool boss: “Big hopes, dreams, all this stuff. From now on we can be a little more influential because everything else is fun and important what we’ve been doing over the past few weeks, but the real test is coming now.”

Mikel Arteta praised Arsenal’s fight in their season-opening 2-0 win over Crystal Palace, but admitted much more was demanded of his attackers.

Arsenal dominated the initial exchanges, but the Eagles challenged Arteta’s side after the restart as the visitors failed to create opportunities in the second half in Gabriel Jesus’ league debut.

However, the Gunners boss admitted his side should have scored more than once for Marc Guehi’s late own goal

James Milner could make his 200th Premier League appearance for Liverpool, while Thiago Alcantara is one game away from raising his half-century.

Fulham boss Marco Silva believes that taking on Liverpool in their first game is the ‘best way to start’ with the Cottagers’ return to the Premier League.

“I think this is the best way to start.” he said before the game: “The most important thing for us is to play at home, to be back in the Premier League with our fans with us.

Speaking to reporters on Friday, Liverpool boss Jurgen Klopp confirmed Alisson was fit to play against Fulham this afternoon and that Naby Keita’s illness was more serious than initially thought, but the midfielder should be ready for the game.

Klopp said: “Ali [is] fine… Naby is sick, but I think he will be back today the first day.

“I underestimated it a bit when I said it would definitely be fine. He came in yesterday and showed some minor symptoms, no Covid but it’s not right. I think he will be back today.”

Fulham boss Marco Silva believes Wales winger Harry Wilson will recover from his injury in time to play at the World Cup in Qatar.

The 25-year-old suffered a knee problem after a collision during his team’s closed-door exhibition game against Aston Villa and will be sidelined for up to two months, with the World Cup starting on November 21.

Silva, whose side will host Liverpool in their first Premier League game since securing promotion on Saturday, said: “It’s difficult for us to give you a timeline as several things can happen.”

The 25-year-old suffered a knee problem after a collision during his team’s closed-door exhibition game against Aston Villa.

Fulham suffered two major blows when Harry Wilson and Nathaniel Chalobah were both injured in the preseason and will miss this opening game against Liverpool.

Joe Bryan missed the club’s last friendly with Villarreal with a hand injury and will be assessed before the game to see if he is fit to start.

Liverpool also have a number of injuries, but luckily goalkeeper Alisson is back after missing the Community Shiel and Naby Keita will be assessed after an illness.

However, Ibrahima Konate, Curtis Jones and Kostas Tsimikas will miss the match, all of whom are injured, as are Diogo Jota, Caoimhin Kelleher and Alex Oxlade-Chamberlain, who are in the recovery phase after injuries sustained over the summer.

A new season, a few new main characters and a suggestion that this reality show may be on track for a sturdier but no less exciting ride this campaign.

A Brazilian named Gabriel has indeed opened Arsenal’s Premier League account and while Martinelli may have been the match winner after completing a clever set-piece routine, the frontline led by Jesus shone in this early investigation from Mikel Arteta’s side.

Another recent arrival – though signed three years apart – was just as significant. William Saliba made his highly anticipated Premier League debut and the 21-year-old was solid in defense as Crystal Palace turned up the pressure and Selhurst Park rose in hopes of an equalizing goal late.

This was the test that had been predicted, but Arsenal did not follow the script. Instead, they held on and Marc Guehi’s own goal, which was deflected past Vicente Guaita on a cross from Bukayo Saka, meant the Gunners got off to a better start than last season.

Crystal Palace 0-2 Arsenal: Gabriel Martinelli broke the deadlock before an own goal from Marc Guehi sealed the three points for Mikel Arteta’s side at Selhurst Park