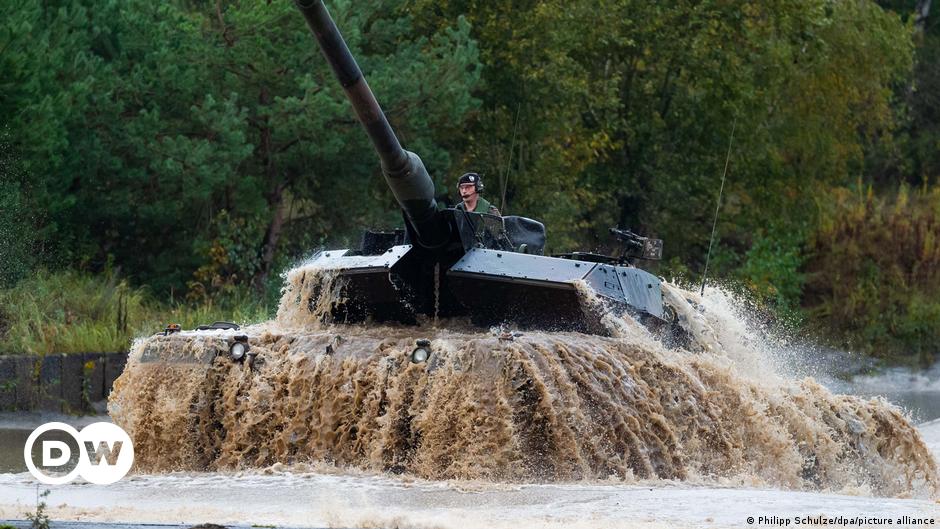 German news magazine The mirror and others published stories on Tuesday evening saying that the government in Berlin had decided to send Leopard 2 tanks to Ukraine.

This follows a long-running debate on the issue among NATO allies and comes after Poland formally requested permission from Berlin earlier on Tuesday to send some of its Leopard 2 tanks to Ukraine.

Mirror magazine reported that the decision would involve sending at least one company of Leopard 2A6 tanks.

Mirror attributed his information to government sources, but did not identify them. Broadcaster ntv issued a similar report, and the dpa news agency later said its “coalition sources” had said the same thing. But the government did not immediately comment publicly on the reports.

German-made military equipment may only be sent to third countries with permission from Berlin. Mirror reported that other European countries, including some in Scandinavia, would also supply their tanks to Kiev.

While the German Defense Ministry, the military and several other actors would certainly have been involved in the talks, the ultimate authority to make this decision rests with Chancellor Olaf Scholz.

The new defense minister hinted at a move earlier on Tuesday

On Tuesday morning, German Defense Minister Boris Pistorius said at a meeting with NATO Secretary General Jens Stoltenberg in Berlin: “I expect a decision to be made soon” on the export of Leopard tanks to Ukraine.

Pistorius said several preliminary works had already begun to allow such exports if they were approved, addressing issues such as ammunition, maintenance and repairs and training Ukrainian troops to operate them.

“We are already preparing for that,” said Pistorius, who was only sworn in last Thursday after his predecessor’s resignation. “And with a positive decision, we can act very quickly.”

A decision or some form of announcement on this was expected in some quarters at the meeting of NATO and other countries’ defense ministers last week at the US military air base in Ramstein, Germany, but it did not materialize. That was Pistorius’ second official day in the role.

The news also coincides with the Wall Street Journal report that the US would consider sending similar M1 Abrams tanks to Ukraine.

One of the reasons Germany gave for its reluctance was that it did not want to be seen as “going it alone” within NATO.

Since the outbreak of war in Ukraine, Germany has faced criticism for the way Germany sends weapons to Ukraine.

That’s mainly because of Germany’s restrictive policy on arms exports to hot conflicts, which has been largely in effect since the country’s defeat in World War II.

The country has reversed several principles or rules it typically adhered to in the post-war years in order to support Ukraine.

However, this has usually taken time, often longer than other NATO allies have needed.

What makes the Leopard 2 the main battle tank of choice?

Similar debates took place first about sending items to Ukraine that were potentially deadly (the first German offers were for non-lethal equipment such as helmets, night vision goggles, tents and so on), and then about a range of other military equipment, from the ground. air defense systems to armored vehicles such as the Marder personnel carriers, among others.

Ukraine and several of Germany’s NATO allies have called on Berlin to act more quickly at times. In Berlin on Tuesday, NATO’s Stoltenberg tried to focus on the deliveries that had come out, saying German weapons “are saving lives in Ukraine every day”.

But Stoltenberg insisted on continuing, saying: “The only way to lasting peace lies in making clear [Russian President Vladimir] Putin that he will not win on the battlefield.”

Pistorius also tried to address this on Tuesday, saying the tank dispute threatened to divert risk from what Germany supplied, saying it involved equipment worth a total of about €3.3 billion (about $3.5 billion) .

“That’s being lost at the moment because of the discussion about tank deliveries and tank operations,” Pistorius said. “Only the United Kingdom also has to deal with figures in that region [the leading donor] the United States.”

A prominent German security observer, Ulrike Franke, wrote on Twitter that she was surprised to see this decision so soon after the Ramstein meeting of defense ministers less than a week ago. She has criticized the German government for a pattern of slow adoption of such issues in recent months, often following a period of pressure in which Berlin insisted it had not yet made a decision.

“From what I can gather, this seems like a wise decision… But: How and why was it impossible for this to happen for Ramstein? So much broken china to finally get here,” Franke, a fellow at the European Think Tank Council on Foreign Relations, wrote in response to the news.