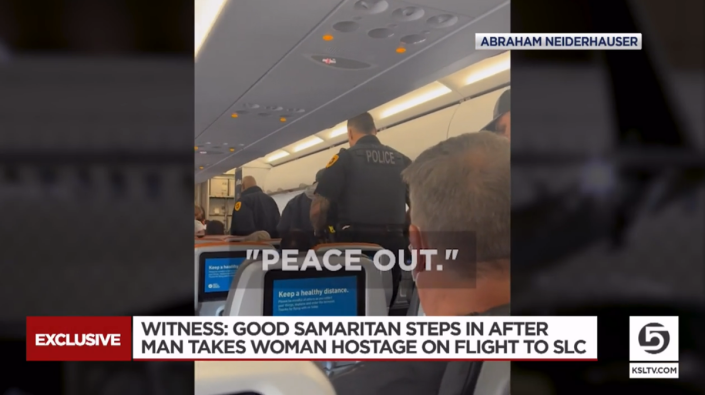 A Good Samaritan has been praised for rescuing a woman on a flight after she was held hostage by a fellow passenger brandishing a razor blade.

The incident occurred on Monday aboard JetBlue Flight 871 traveling from New York City to Salt Lake City, Utah, when alleged drunken suspect Merrill Darrell Fackrell suddenly pulled a knife at a fellow passenger and held it against the terrified woman’s throat. loved.

A Good Samaritan sprang into action and managed to snatch the knife from the perpetrator – before sitting down with him until the flight was able to land and the police arrested him.

Mr Fackrell had allegedly consumed “several” alcoholic beverages over the duration of the flight and had “talked ML into conversation while RL had headphones on and was at work and watching a movie,” according to court documents obtained by Gephardt Daily.

When the woman returned to her seat after going to the bathroom, she put on her headphones and started watching a movie, the documents say. Shortly after the film started, however, the woman noticed that Mr. Fackrell had put his hand over her screen and asked that her film be paused.

As she began to take off her headphones, ML realized something was very wrong

“[Mr] Fackrell had his hand clamped with what appeared to be a knife several inches from her skin at her throat/neck near the collar of her shirt,” the indictment said.

The woman’s husband registered then and there that something wasn’t right, the complaint said, and it was at that point that Mr Fackrell told him to “take the [expletive] get out,” the documents read.

The man identified only as RL then ran to the front of the plane to get help from the flight attendants, while his wife continued to struggle with the suspect.

Passengers on board the flight recounted the altercation to KSLTV, explaining how – after realizing the man was holding some sort of weapon to the woman’s throat – panic engulfed the cabin.

Abraham Neiderhauser, on his way home to Utah after traveling Europe for five months, sat a few rows behind Mr. Fackrell and the woman, which gave him a vantage point where he could capture some of the interaction on camera and could hear almost everything that was going on.

“He says, ‘Don’t worry, she’ll be fine. She’ll be fine’, and it was a bit weird and also a bit ominous, the way he grabbed her,” Mr Neiderhauser said.

Mr Neiderhauser added: “He said, ‘This is not 9/11 s***. He said, “Just land the plane and everything will be fine.” We didn’t understand why he wanted to land the plane.”

Not long after the passengers on the plane began to realize what was happening, ML managed to break free from the 41-year-old’s clutches and “jump” down the aisle, according to the indictment.

Then a passenger across the aisle from the suspect registered what was going on and confronted him.

The Good Samaritan, identified only as RH, “began a confrontation with [Mr] Fackrell and managed to get him to put the object on the chair,” the indictment said.

At that moment RH grabbed the knife and gave it to the crew for safekeeping.

The Good Samaritan then sat next to Mr. Fackrell for the rest of the flight.

Mr Neiderhauser, who identified the Good Samaritan by his first name “Rob”, acknowledged that his bravery did not go unappreciated by the tense passenger cabin, all of which were tense for the next 30 minutes until the plane landed and the suspect was led away by police.

“Rob was very brave, you know, so engaging,” he said.

Before the police arrived, Mr. Neiderhauser took out his mobile phone again to film the suspect being removed from the plane, shouting back to the passengers: “Peace out”.

“You felt the whole plane breathe this collective sigh of relief,” said Neiderhauser, later adding that “after he left, everyone clapped for Rob because they were very grateful to him.”

He added, “I think it was really traumatic for a lot of people.”

The knife-like object turned out to be a Facón razor with a wooden handle and a 1- to 2-inch blade, according to the FBI.

It is not clear when the suspect will appear in court.

Experts warn of tripledemic as cases of COVID, flu and RSV rise

Airport staff on strike for eight days over Christmas