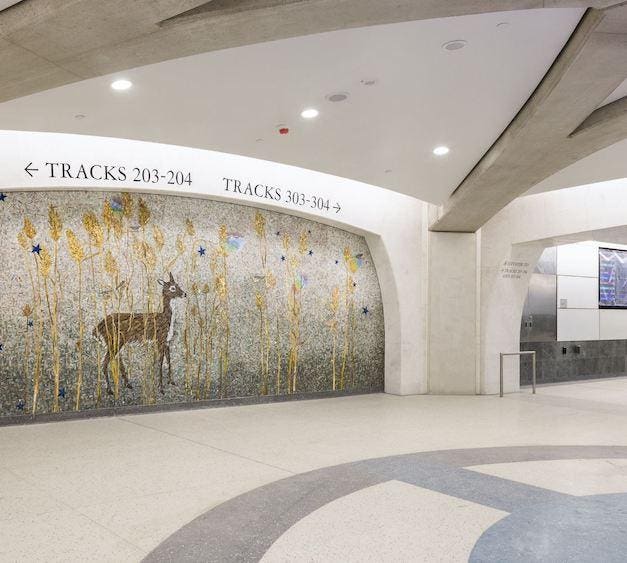 It’s great news for commuters, as well as art lovers, with new works by Yayoi Kusama and Kiki Smith – great additions to the sprawling underground art museum that is New York City’s subway.

Sandra, how would you summarize the importance and uniqueness of the MTA Arts & Design program?

It is impossible to measure the value of the impact of the art in the New York subway on those who experience it. Affectionately referred to as an underground art museum – the folk museum – those who may never set foot in a typical art museum will experience daily works of art similar to those you see at MoMA, the Whitney or the Met. How special is that? New Yorkers and tourists have become accustomed to experiencing excellent artwork in New York’s subway and train stations – that’s the mark of success – New Yorkers expect world-class art in their transportation system and get it!

It is an extraordinary, unique place.

The Grand Central Madison terminal has several new permanent artworks. You said it was a very competitive process. What were you and the rest of the committee looking for?

Our goal in selecting art for Grand Central Madison was to commission work that would make you stop! The new terminal is over 700,000 square feet, a landmark space. It was important that the artworks were monumental, yet thoughtful, establishing a presence in what is a new portal into the heart of Manhattan.

We have always known that art has power. Many who may not have been so aware became very aware during the isolation of the pandemic – that art connects and engages us and in Grand Central Madison it brings excitement and energy to this new public space.

What are you most excited about commuters discovering?

Both Yayoi Kusama and Kiki Smith speak to this site, which was a very important factor in the selection process. Kusama’s visual language stems from her ‘My Eternal Soul’ series – works that are personal yet playful. The work pulls you in and you are caught in the magic, feeling very present and escaping the hustle and bustle of the city above for a while.

Kiki Smith’s response to the site was immediate. “River Light” is inspired by the East River and the light that falls on it, but at the same time, the imagery also evokes the bursts of light inspired by the constellations and stars in the celestial ceiling above Grand Central Terminal’s main concourse.

Throughout Grand Central Madison you can see the architectural references to the Terminal above, the shapes, the curved arches. This architecture was conceived two decades ago by Peter Hopkinson, the project’s lead architect. From the start he was concerned about the inclusion of art, and we immediately identified the four vaulted niches in the lower level mezzanine as an important venue for art and, with Smith’s artwork translated into mosaic, it proves an ideal transition to be from city to suburbia and vice versa.

2023 Aston Martin DBS: a journey of speed and style

Sumos, temples and geishas – a trip through Japan not to be missed