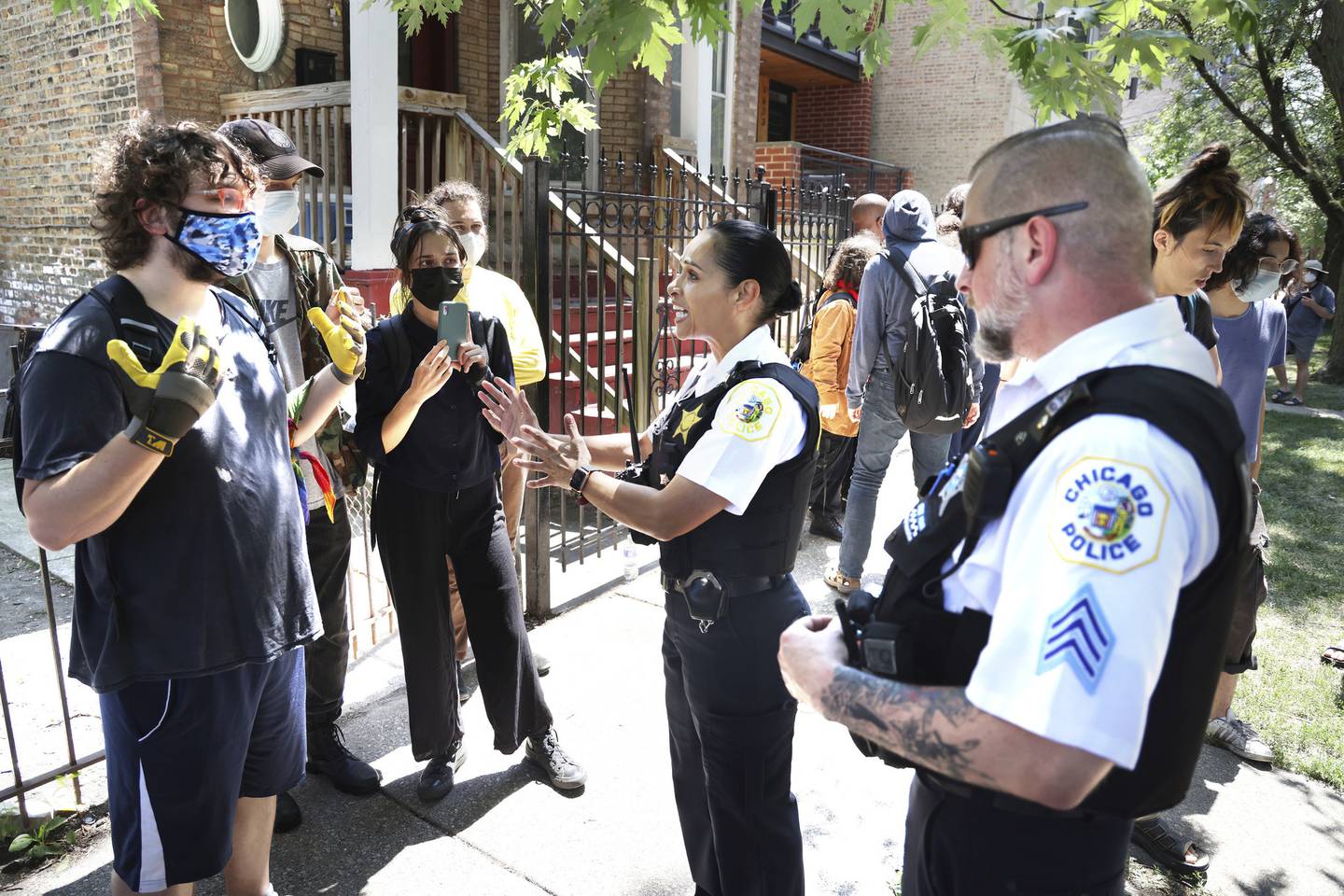 About 35 people gathered in front of a four-bedroom house in Humboldt Park on Friday, enjoying the sun, music and food. They were stationed there to serve as a barrier between the people living in the house and the people trying to push them away.

The house was one of four homes from which about 12 people were “illegally locked out” on July 26, said social researcher Emma Tamplin, 26, who helps the people who have named their home 1629 N. Washtenaw Ave since the New Year.

KD Williams, 39, and Wilson Mather-Glass, 25, are two of those occupants. They said they moved on Jan. 1 after seeing a homeless camp pop up nearby, while a large number of homes reportedly owned by the Chicago Housing Authority stood empty.

According to city records, the Housing Authority has owned the property at 1629 N. Washtenaw Ave since 1996.

Williams said there was no notice of eviction before July 26, when Hispanic Housing Development Corp. employees. reportedly came to the house and removed some of their belongings and asked Williams, Mather-Glass and a third roommate, who was out of town Friday, to remove the rest.

“They broke into our door, broke a lot of our stuff, threatened us, used a lot of homophobic and transphobic insults,” Williams said.

A representative of the Hispanic Housing Development Corporation said Friday that all requests for comment would be referred to the CHA.

The housing authority said in a statement: “CHA takes these issues seriously and is following all appropriate legal procedures to remove squatters from our property. We watched the video of the meeting on July 26 and are concerned about how this situation has been handled. by our third-party property manager and this incident is under investigation.”

Since Friday, Williams and Mather-Glass have returned with their belongings. Williams said occupying vacant houses is one way to challenge the “housing authority’s practice of keeping houses empty for years.”

The house at 1629 N. Washtenaw Ave. had several code violations as of 2019, according to the city’s building permit and inspection records, including failing to register the building as vacant within 30 days of it becoming vacant or within 30 days of taking ownership of an existing vacant pledge. building. The house was also cited for failing to maintain the exterior walls and keeping holes, fractures, and other conditions that could allow rain or moisture to get into the walls.

See also  Sean Duffy: People are getting poorer and more desperate by the day

Williams, who works as a teacher and also studies civil engineering, said it’s clear the house wasn’t built to last. “None of these vacant homes have been maintained because they’re all falling apart,” Williams said. “Then that’s their excuse to leave them empty.”

The housing authority said it maintains more than 16,000 units of public housing and some of the units are vacant at any time for a number of reasons, including planned redevelopment, work such as painting and minor repairs, and units undergoing more extensive capital improvement work.

“CHA provides safe and stable housing to 63,000 families in the city,” the statement said. “We are working closely with other city and non-profit organizations to provide housing opportunities to tackle homelessness, including recently issuing nearly 1,200 emergency housing vouchers.”

Tamplin said the four houses from which about 12 people were locked out last week “have been vacant for several years.”

On Friday, she wasn’t sure if any of the other three houses had been reoccupied since July 26, two of which were previously occupied by “more vulnerable people who were homeless” that the Humboldt Park Housing Project is “trying to protect”. she said.

“The important thing is to turn these empty houses around,” Tamplin said. “They have to be available to people who need them. It’s absurd. People need housing, and if they go on about the need for affordable housing, they have to do the bare minimum and spend what they get every year to take care of these places and make them available immediately.

Mather-Glass, 25, is a special education classroom assistant, musician, activist and restaurant worker, and he said the community has supported the group’s efforts.

There are no signs of trouble from the group, Mather-Glass said, and at the end of the day, most people are mostly concerned about keeping their neighborhood safe.

“We hear about it every day, but where does this violence come from,” Mather-Glass said. “What are the things that push people onto the streets and drive people to despair? Not having a house, removing that foundation from under you, that’s square. Once that happens, you slide down.”