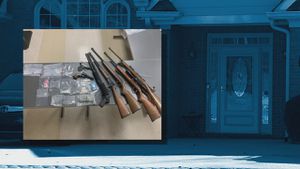 Investigators say a pair of fentanyl traffickers ran a drug operation out of a home in the Loganville neighborhood.

Police found guns, drugs and cash while searching the house before arresting two people and charging them with human trafficking.

Channel 2’s Matt Johnson learned that the fentanyl found in the Templeton Drive house last week has already been linked to several overdoses.

A task force made up of police officers from Lawrenceville, Duluth, Lilburn, Snellville and Suwanee helped raid their home last week.

“Once they found out who the source of the fentanyl was, they were able to take the case back to this person’s residence,” Parker said.

Authorities say their investigation shows Kaplan and Fawaz may be linked to more overdoses in counties outside of Gwinnett.

“[They found] a lot of things that confirmed that this person was part of the fentanyl supply chain here in Gwinnett County and most likely some other counties around us,” Parker explained.

Both Kaplan and Fawaz are being held at the Gwinnett County Jail.