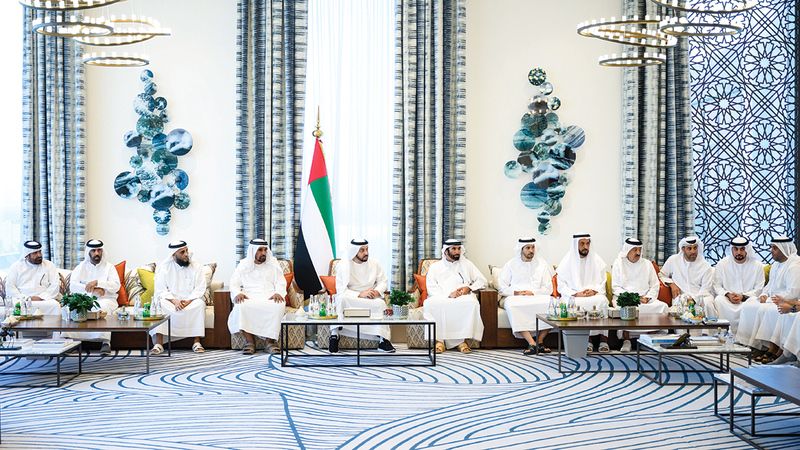 His Highness Sheikh Hamdan bin Zayed Al Nahyan, the representative of the ruler in the Al Dhafra region, directed to overcome all difficulties facing the completion of government projects and to work among all relevant authorities in the spirit of one team to achieve the plans set, calling on His Highness to speed up their implementation.

His Highness had received at Dhana Palace a number of citizens and government sector officials in the Al Dhafra region.

His Highness stressed that following up on the conditions of citizens, providing them with a decent life and meeting their needs receives the directives and attention of His Highness Sheikh Mohammed bin Zayed Al Nahyan, President of the State, praising His Highness for the comprehensive development efforts and the capabilities that the country’s leadership has harnessed for this purpose. His Highness noted the importance of continuous work towards completing the march of successes achieved in all fields and service sectors, in a manner that maintains the stability, growth and prosperity of all cities in the Al Dhafra region.

For their part, the citizens and officials of government sectors in the Al Dhafra region valued the interest and follow-up of His Highness Sheikh Hamdan bin Zayed Al Nahyan, for all means of stability and the elements of a decent life for citizens, and his keenness to communicate with them permanently.

Putin’s allies slammed Russia’s retreat from a city in Ukraine, calling military leaders “garbage” and saying they should be “sent barefoot with machine guns...