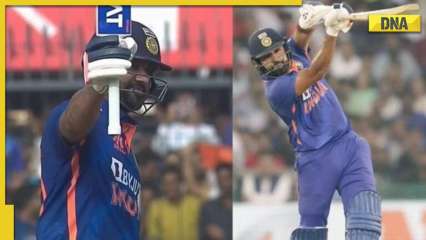 India captain Rohit Sharma ended his three-year drought in spectacular fashion by crushing 101 runs off just 85 balls with nine fours and six sixes with a strike rate of 118 in the third ODI against New Zealand at Indore. Despite a barrage of criticism over the years, Sharma silenced his critics with a masterful performance that will be remembered for years to come.

Rohit made his half-century in 41 deliveries and the next 50 runs came in 42 balls. His last ODI century was against Australia in Bangalore in January 2020.

Rohit Sharma is now tied for third on the list of most ODI centuries, having reached his 30th century in the format. Ricky Ponting previously held the record with 30 centuries from 375 one-day internationals, but Rohit has now surpassed him in just his 241st game.

Talk about leading the way!

It was a vintage performance from Rohit Sharma as he sent sixes effortlessly and showed no mercy to Mitchell Santner, who had previously harassed in-form Virat Kohli in Hyderabad and Raipur.

Likewise, fans have taken note of this remarkable achievement and have flooded the internet with countless comments and messages of admiration for the Indian team captain.