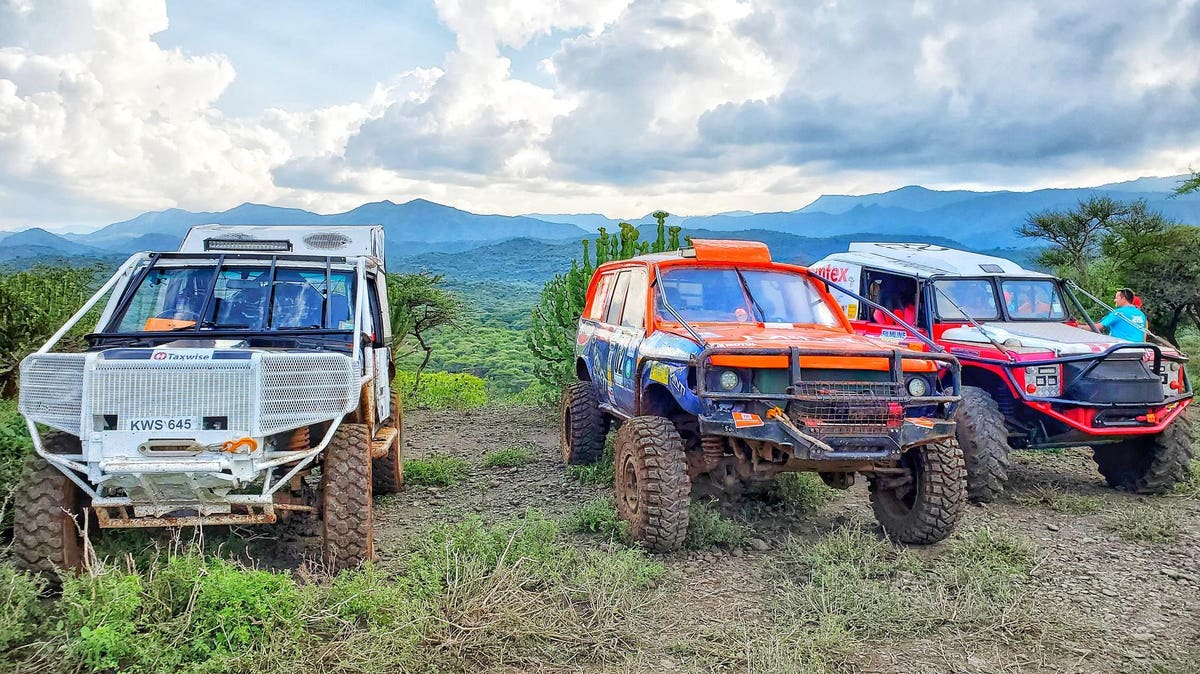 Billed as the most extreme off-road challenge in the world, this year’s Rhino Charge raised more than $1,250,000 USD as 44 teams navigated the wild terrain of Baringo, Kenya. The course changes location each year, with thirteen checkpoints, called controls, disclosed only the night before the race, and identified only by coordinates. Teams line up before sunrise and must blaze trails through dense brush, riverbeds, cliffs and more as they navigate the unaltered land, attempting to reach all controls in the shortest distance before time runs out in the evening. In a typical year, most will not finish due to vehicle breakdown, and plenty will come away with injuries large and small (there’s a medical team onsite, surveillance helicopters and even medevac copters, which do get used). It’s certainly a competition, with most teams returning year after year, and there are several categories of prizes, but no money is awarded to any winners0. In fact, everyone must pay to attend, including the volunteer staff (and yes, that includes those copter pilots).

Rhino Charge is the primary fundraising event for Rhino Ark, an NGO with tireless devotion to conserving and protecting Kenya’s mountain range ecosystems, communities and endangered wildlife, and this single event has helped to save not just entire ecosystems and communities across Kenya, but lives. The Charge, which includes communal camping in remote regions of Kenya for the days leading up to and immediately following the big day, is open to the public and attendance includes access to the course during the event, so everyone has a front row seat to jaw-dropping action in eye-popping landscapes, all in an atmosphere of celebration and support for Rhino Ark’s endless commitment to Kenya’s land, people and wildlife. Here’s a look at some of the work Rhino Ark does, which you can support by attending the spectacle of Rhino Charge 2022 yourself, or by donating directly to the organization if you can’t make it to Kenya next June.

While the primary goal of each Rhino Charge is to fund Rhino Ark’s major projects for another year, the local communities who invite the organization to use their land each year also benefit from the Charge. Rhino Ark seeks invitations from marginalized communities with both a need for support and a demonstrated means for handling a cash influx that would be difficult for some of Kenya’s less organized communities. Each Charge team pays the community a land access fee for entry, with these fees alone amounting to nearly $50,000 USD this year, and that was during a pandemic-forced rescheduling with nearly a third of the usual entrants unable to attend. In addition, most teams hire local community members to help with their camp and/or vehicles, and others are hired directly by Rhino Ark to assist with camp and course logistics. Despite the massive scale of the event, which hosts of thousands of visitors for upwards of a week, the area is left without a trace of outsider presence through careful advance preparation, responsible stewardship during the event and meticulous inspection after. As for the land itself, which may appear devastated by such intense off-roading, all potential courses are surveyed before selection to ensure they’ll suffer no lasting impact, and are revisited a year later to confirm they have regenerated properly. In addition, Rhino Ark calculates all known carbon impact for the entire event, including the distance each vehicle traveled to reach the venue, and adds an additional ten percent for potentially overlooked impact when purchasing a carbon offset for the Charge.

Rhino Ark’s first project kicked off in 1989 when it began construction on a massive fence separating sections of Aberdare National Park from the rural communities along its border. The mission’s goals were simultaneously to protect the park’s black rhino population from intense poaching and to protect the bordering communities from devastating damage to both property and life inflicted by powerful wildlife. Twenty years later, the final post of the fence was installed after the successful project was expanded to encompass the majority of the park, as well as an additional forest reserve used by elephants, providing nearly 250 miles of protection to both humans and wildlife in the region without isolating or confining either. Prior to the fence, communities along the border were decimated as wildlife trampled their farms and killed their populations. Despite attempt at safety measures like planting thorny borders, building moats and beating drums and lighting fires through the night, it became impossible to let children under 14 walk to school, for anyone to go outside in the evening and, eventually, to live in the communities at all, leaving many with no choice but to flee, homeless and without resources. Since the protective fence, communities have returned to their original lands, literacy rates have soared and property remains generally undisturbed. Baboons are the only animals currently capable of outsmarting the fence and they do get over from time to time, but their handiwork amounts to roughly 3% of the previous level of human-wildlife conflict in regions that Rhino Ark has assisted. Today, Rhino Ark has executed fence projects similar to this in other regions around the nation, like Mount Eburu and Mount Kenya.

Kenya’s mountain regions, like this one, are responsible for providing the majority of the nation’s water supply, and the impact of Aberdare’s water alone accounts for roughly 40% of capital Nairobi’s GDP, but deforestation before the fence had left this and Kenya’s other natural “water towers” practically eviscerated, reducing rainfall to levels so dangerously low that communities had little to drink or cook with, even less for their crops and none for bathing. As communities saw the immediate and tangible impact of Rhino Ark’s life-saving fences, a newfound trust inspired them to become receptive to the organization’s language of conservation, and many of these ecosystems have experienced dramatic recoveries, in turn saving not just the land and wildlife but the communities themselves. Rhino Ark commits to ecosystems permanently, remaining on the ground long after a project like a fence is complete, dedicated to maintaining land and perpetually educating and supporting the communities within. For example, while some organizations fundraise for tree planting projects, Rhino Ark practices tree growing, which means properly cultivating land and remaining behind for years to ensure healthy growth, as well as supporting the land’s stewards indefinitely to ensure lasting success and compounding benefits. As one project manager puts it, you can think of this as the difference between birthing a child and raising a child.

Rhino Ark’s success is likely attributable to its steadfast devotion to connectivity. Though this notion is an overarching ethos for the organization, encompassing the ideals of connecting communities to their environments and connecting wildlife to all of their habitats and resources, the Ark’s greatest asset is its ability to make intuitive connections through its vast network, who are far more than just donors. Initially launched as a private organization to support the Kenya Wildlife Service, Rhino Ark communicates with KWS almost daily now, and a KWS representative states that, while the Rhino Ark budget is relatively small, the ripples of its strategic programs account for 30% of KWS’s security efforts and an estimated 40% of its of total work, with nearly 100% of community conflict resolution coming solely from Rhino Ark outreach, education and projects. Rhino Ark also works in partnership with Kenya Forest Service and other government agencies, but its greatest resource is its network of well-connected TUSEN who offer not just necessary funding, but resources and expertise to creatively solve Kenya’s concerns, and many from this network comprise the teams competing in Rhino Charge each year. Rhino Ark’s invaluable fences, for example, are built with fence posts manufactured from plastic waste generated by the country’s floral industry, providing fence posts far more durable than traditional posts, and resolving both a waste problem and a construction need simultaneously. This solution came from within the Rhino Ark network, which includes some of Kenya’s top growers, and wouldn’t have been possible without the open dialog Rhino Ark creates between all TUSEN from individual community members to business owners and government officials.

On the most personal level, Rhino Ark works directly with individual community members to develop sustainable businesses that reduce the burden on local environments while improving the economic conditions of the individuals and their communities, but nothing from Rhino Ark is a handout. Rather than donating food, tools or money, Rhino Ark values the teach-a-man-to-fish proverb, educating individuals on the importance of making more sustainable choices, sharing practical ways of doing so, and making connections between community members and those who can offer the resources they need.

Joseph Kariuki, a farmer in the Mount Eburu region, was growing just three crops on his property before Rhino Ark programs introduced him to methods and techniques that allowed him to expand to a current roster of 15 crops from avocado and passionfruit to sugarcane and bananas. To water his impressive output, he’s learned collection techniques that rely on large tarps he can purchase for a reduced price through another Rhino Ark connection. It still takes Kariuki nearly two years of saving small bits each month to afford each tarp, but the benefits of even a single reservoir are tremendous; they’ve saved a few of his fields this year alone, when rain was scarce. Through another Rhino Ark personal connection, Kariuki learned about a breed of chicken that grows to twice the size of his previous chickens, and does so in half the time. Through a modest chicken operation in a single coop next to one of his crop fields, the considerably higher prices he now commands for both the chickens and their larger eggs have funded a stone house for the Kariuki family.

Elsewhere in Eburu, Lydia Nyota has become an opinion leader for her community. A bio-gas entrepreneur, organic farmer and all-around conservation champion, Nyota serves as a community liaison, meeting monthly with 16 other neighboring leaders to exchange ideas and bring them back to their communities. These volunteer leaders have been trained by Rhino Ark in order to reach their neighbors personally because, as Nyota says, “when farmers speak with farmers instead of scientists or the government, it has a stronger impact.” Where the region’s communities were previously farming merely for subsistence, when not poaching charcoal and wood from the land in dangerously destructive quantities, they’re now learning sustainable techniques that allow them to farm for profit. Nyota’s remote farm is completely organic, and she produces bio-gas from the waste of just a few livestock animals on her property, powering her kitchen with complete independence through a method she learned from Rhino Ark and equipment she purchased herself through Ark connections. While it may have taken a multi-million-dollar project like the life-saving Aberdare fence to plant the seed of trust between Rhino Ark and Kenyan people, the continued recovery of Kenya’s ecosystems and growing success of its communities owe a debt of gratitude to Rhino Ark’s insistence on empowering individuals who are, in turn, re-educating each other and saving their own nation.