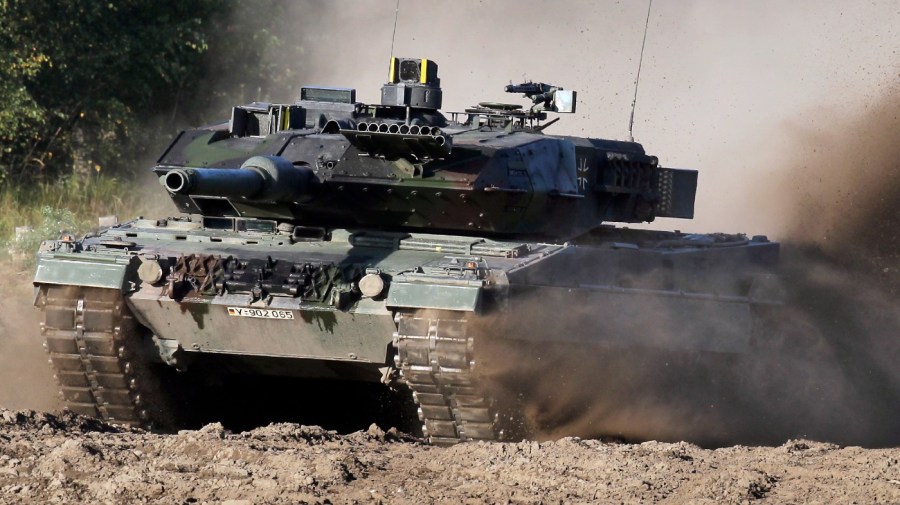 Both Germany and the US announced on Wednesday that they will supply main battle tanks to Ukraine after weeks of tension over donating the heavy fighting vehicles.

The 31 American M1 Abrams tanks are unlikely to arrive in Ukraine until the fall, while the German-made Leopard 2 tanks could be in Kiev in a few months — possibly in time for Russia’s expected renewed offensive.

The Leopards are the most common Western battle tanks in Europe and the Abrams are a prized Western fighting machine. Both will provide significantly more firepower than the Soviet-era tanks currently used by the Ukrainian armed forces.

Henk Goemans, director of the University of Rochester’s Center for Conflict and Cooperation, said the tanks would be “very important” to Ukrainian forces in the current phase of the war, which is largely mired in the east.

“Ukraine is at a quantitative disadvantage,” he said. “Russia has more manpower, they have more military… and the tanks would make a big difference there.”

Here’s what you need to know about the Leopard tanks and how they can affect the war.

What are Leopard and Abrams tanks?

See also  The Somali famine, head of the World Food Program slowed, but could not be avoided

There are now four iterations of the combat vehicle: A4, A5 and A6 and A7.

Ukraine gets the Leopard 2 A6. About 18 countries have those tanks and it is estimated that 2,000 were produced over the years, of which Germany has about 300 in stock.

The tanks, which can accommodate four crew members, have diesel engines with 1,500 horsepower and can travel at up to 70 km/h on the road.

The US Abrams, first introduced in 1980, is the third generation of US main battle tanks. It comes in three different model iterations, ranging from a weight of about 60 tons to about 73 tons, with similar weapons specs to the Leopard, but a turbine engine that uses mostly jet fuel but can run on diesel fuel.

How will the tanks help Ukraine?

As European allies also plan to donate their own Leopards, Kiev could receive 88 of the tanks or two battalions within months. It’s unclear exactly when the Abrams will arrive.

See also  Jared Polis on Trump, 2024 and how to deal with classified documents —

The tanks come at a crucial time. Ukraine is preparing to repulse a Russian offensive and launch its own counter-offensive in the spring.

Leopards and Abrams would no doubt aid brutal fighting in eastern Ukraine, where a grueling war of attrition rages, and in the southeastern region of Zaporizhzhya.

John Herbst, the senior director of Eurasia affairs for the Atlantic Council, said the “tanks will help Ukraine defend its positions with fewer casualties in both locations.”

“They will also prove invaluable if Moscow launches a major offensive this year from Belarus or elsewhere, something Ukrainian intelligence services expect,” Herbst said in an analysis Wednesday.

The tanks could also help Kiev recapture the Crimean peninsula, which Russia illegally annexed in 2014.

So what was the delay?

Germany weighed in on concerns about escalating tensions with Russia and sought to cooperate with the US and other NATO allies.

Ukraine has been asking for heavier combat vehicles for months. NATO allies announced the first donation of infantry fighting vehicles, such as the Bradley Fighting Vehicle, earlier this month.

The tank debate picked up steam when the United Kingdom announced it would be sending several of its Challenger 2 main battle tanks, putting pressure on Berlin and Washington to follow suit.

However, Germany and Washington have remained deadlocked on the issue in recent weeks. German Chancellor Olaf Scholz said he “wouldn’t do it alone,” while the Pentagon said it would not send the Abrams because they are difficult to maintain on the battlefield.

However, the US and Germany have addressed their concerns and Biden changed his mind earlier this week, according to the White House.

“Today’s announcement builds on the hard work and dedication of countries around the world … to help defend Ukraine’s sovereignty,” Biden said.

“We are not going to allow one nation to forcibly steal a neighbor’s territory.”

One in four of Putin’s troops fighting in Ukraine are convicts...