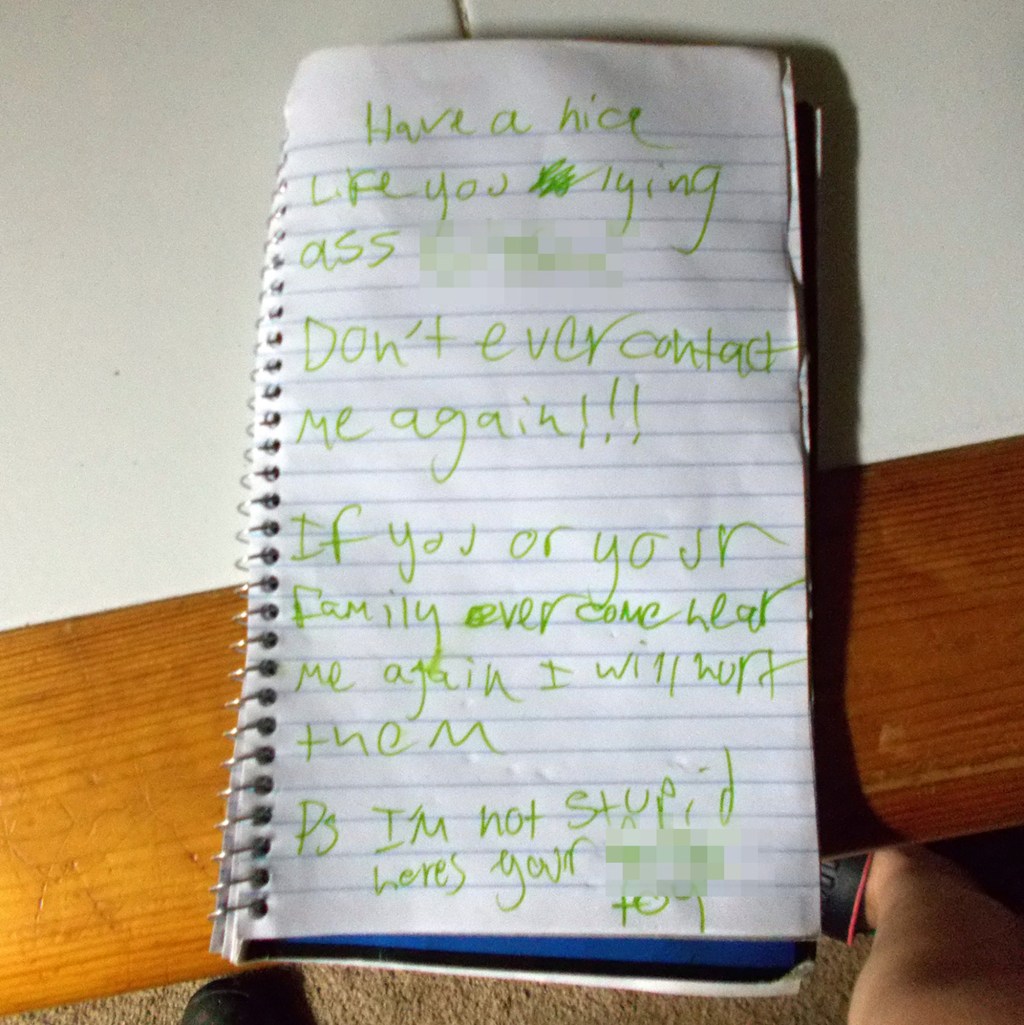 The boyfriend of the murdered daughter of Georgia Debbie Collier is said to have threatened violence against her entire family in a chilling letter last year – and was arrested last month for violating parole.

“If you or your family ever come near me again, I will hurt them,” former amateur MMA fighter Andrew Giegerich reportedly wrote to Debbie’s daughter Amanda Bearden in a chilling note obtained by The Post.

The handwritten message, scribbled in green marker, was included in photos of police evidence following a May 2021 domestic dispute between Bearden and Giegerich, who lived in a house owned by her stepfather, Debbie’s husband Steve.

“Have a nice life you lying bastard bra. Never contact me again!!!” Giegerich apparently wrote in the note before issuing the threats.

According to police documents, Bearden claimed her boyfriend broke into her home, yelled at her and assaulted her, showing bruises on her shoulders and arms.

A police report reads: “In her living room, Bearden showed me a handwritten note that had been left on a notebook.

“She advised Giegerich to write this before he left.”

Giegerich — who had an amateur MMA record of four wins and three losses, but has not fought since 2018, according to tapology.com — was arrested and charged with several charges, including battery, as a result of the incident.

The Athens-Clark County Police Department described the two as “an abusive family relationship”.

“Andrew Giegerich intentionally inflicted visible bodily harm on Amanda Bearden, namely: she had visible bruises on the right arm and shoulder,” his May 2021 arrest warrant stated.

He was also ordered to stay away from Beardon, who was also arrested and at the same time charged with making a false police report for saying that Giegerich had broken into their house when they were actually living together. Her case over the incident is still pending.

The same police report also quoted a man who identified himself as Beardon’s stepfather, telling officers, “The violence between Bearden and the boyfriend was pretty constant throughout the entire time they were together, for a few years.”

Despite the orders to stay away, Bearden and Giegerich still seem to live in the same house together and claim they returned from Maryland just two days before Debbie disappeared.

Giegerich told The Post on Thursday that their phones were seized by the police after Debbie’s death.

“They questioned all of us. The people closest to you [Debbie] are currently considered suspects,” he said.

However, it is standard police procedure to interview family members and those who last saw a person alive after a murder, as part of the process of removing them from the investigation.

Neither Bearden nor Giegerich have been named as suspects or persons of interest by the Habersham County Sheriff’s Office of Georgia Bureau of Investigation, who are jointly investigating Debbie’s death.

Giegerich did not immediately respond to a request for comment on his threatening note on Friday.

It was Bearden who initially sounded the alarm and reported her mother missing after receiving a terrifying Venmo payment from her on September 10.

Stay up to date with today’s most important news

She was found dead on September 11 in a ravine about 60 miles north of her home in Athens, Georgia, naked and partially burned according to police documents.

Beardon and Giegerich said they had last seen Debbie the day before, when she bought them lunch.

Police records show that Beardon and Giegerich have had a long-standing volatile relationship.

Following the May 2021 incident, a speedy arraignment was made for him in June 2021, noting it was his “second or subsequent arrest for a domestic violence crime” and banning him from contacting take with Bearden.

However, he was charged with violating that order in September 2021 after going to Amanda’s residence and allegedly “banging on doors and windows to get in,” according to court documents.

That same month, he was arrested for felony DUI, having marijuana, not wearing a seat belt, not requiring tag lights, and reckless driving.

He pleaded guilty to not having the required tag lights and reckless driving, and the rest of the charges were dismissed.

Giegerich pleaded guilty to the domestic violence charges in January and was sentenced to 12 months’ probation.

He was then arrested again for violating his parole on August 26 and ordered to serve six days in prison and prove that he had started a substance abuse treatment program within 20 days.

It was not immediately clear whether he was serving the prison sentence or entering treatment.

Bearden also has a string of previous arrests, including incidents where she argued with other boyfriends.

In 2012, an argument with her boyfriend resulted in an arrest for assault, but she later pleaded guilty to the lesser charge of disorderly conduct in November 2012, which landed her 12 months’ probation, a warrant to take anger management courses, and no contact. with that boyfriend.

In 2013, Bearden, then 27, broke her probation after she “attempted to provide a fraudulent sample” to a drug testing lab and was sentenced to 30 days in the local jail. It is not clear how much time she spent in jail.

Police say they have classified Debbie’s death as murder and have ruled out both kidnapping and suicide.