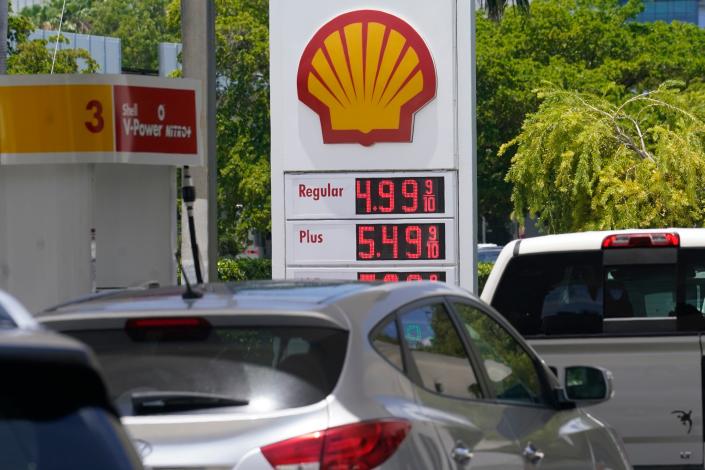 WASHINGTON — Gasoline at five dollars a gallon isn’t a bargain in the United States, but in other parts of the world it’s a bargain.

Hong Kong drivers pay more than $11 a gallon at the pump. Filling up in Finland costs over $10 a gallon. In Iceland, Norway, Greece, Denmark, the Netherlands, Monaco and the Central African Republic, gasoline prices exceed $9 per gallon.

In fact, compared to the rest of the world, the US is in the middle of the pack when it comes to gasoline prices – even as inflation wreaks havoc on the US economy. Prices are higher in 93 countries and cheaper in 74 others, according to an analysis by GlobalPetrolPrices.com, which tracks retail fuel prices around the world.

That may not be much consolation for President Joe Biden, whose approval ratings have plummeted as gas prices soared and inflation soared. Four in 10 Americans blamed Biden and his policies for rising gas prices in a Quinnipiac University poll in March.

But energy analysts say the rising cost of oil is fueling gas prices around the world and at home, not Biden or his policies. How can the President of the United States be responsible for gas at 8 dollars a gallon in France?

“It has no real effect on world oil prices,” said Christopher Knittel, an energy economist at the Massachusetts Institute of Technology.

“AMERICANS ARE ANXIOUS”: Relentless inflation puts pressure on Biden ahead of midterms

Biden has taken several steps to try to relieve Americans of gasoline prices, which averaged $4.94 a gallon nationwide on Thursday but rose to more than $5 a gallon in more of a dozen states, according to AAA.

Biden released more than 180 million gallons of oil from the country’s emergency reserves, called on Congress to suspend the federal gas tax for three months and tried to persuade energy companies to increase oil production .

Granholm reiterated Biden’s call to do more to ensure their companies pass the savings on to their customers and asked his team to continue working with companies to seek solutions to supply and pricing issues, his office said in a statement.

In reality, there’s not much Biden can do to lower pump prices, Knittel said.

“Even the things he’s already done and suggested are short-term marginal impacts on the price of gasoline,” he said. “It’s hard for Americans to see this, but the global market is so big and vast, it’s hard even for a big country and economic powerhouse like us to have a big impact” on prices.

RELATED: With gas prices at $5 a gallon, Biden tells oil companies to cut costs for Americans

Oil prices are impacting the cost of gas around the world, and the price of crude has soared to more than $110 a barrel since Russia invaded Ukraine in February. Every time oil prices go up, “you’ll see gasoline prices go up in almost every country except those that administratively hold their prices at a pre-determined level,” Knittel said.

Gas prices can vary widely around the world. But in general, rich countries have higher prices while poorer countries and those that produce and export oil have significantly lower prices, according to GlobalPetrolPrices.com.

Gas prices in the United States are determined by the market. But in some countries, oil companies are owned by the state, which provides fuel subsidies to keep gas prices low or prevent price fluctuations. In Venezuela, Iran and Libya, all of which offer fuel subsidies, gas costs less than $1 a gallon.

Any country that sells gas for less than $2 a gallon is subsidizing it, said Neven Valev, owner of GlobalPetrolPrices.

Cheap gas prices can be good for consumers, but can lead to other problems. In Venezuela, “we see how it has gone for them,” said Patrick De Haan, head of oil analysis at GasBuddy, which tracks fuel prices. “The infrastructure is failing left and right due to a lack of revenue. When you charge far below market rates, it is difficult to maintain the infrastructure.

Taxes are the main reason for the wide variation in world gas prices. In the United States, the federal gasoline tax is 18.4 cents per gallon, and state gasoline taxes average about 30 cents per gallon. So when a motorist pays $5 per gallon at the tank, about 50 cents of that cost is in taxes.

Many other countries impose higher gasoline taxes. In Hong Kong, which tries to discourage people from driving, gasoline tax can reach $6 a gallon. European Union countries are required to levy a minimum excise tax of $1.55 per gallon on gasoline in hopes of enticing more people to use public transportation.

“They try to keep cars on the road by discouraging people from having a car,” De Haan said.

While current gas prices are not Biden’s doing, his administration has made matters worse by vilifying the energy industry and pursuing policies that limit oil production and inject uncertainty into oil markets. energy markets, said De Haan.

“It does no one any credit,” he said.

This article originally appeared on USA TODAY: Biden is feeling the heat from higher gas prices. But is he guilty?

Cassidy Hutchinson’s testimony confirmed: Trump tried to get behind the wheel on 1/6

Democrats brace for more SCOTUS decisions they don’t like