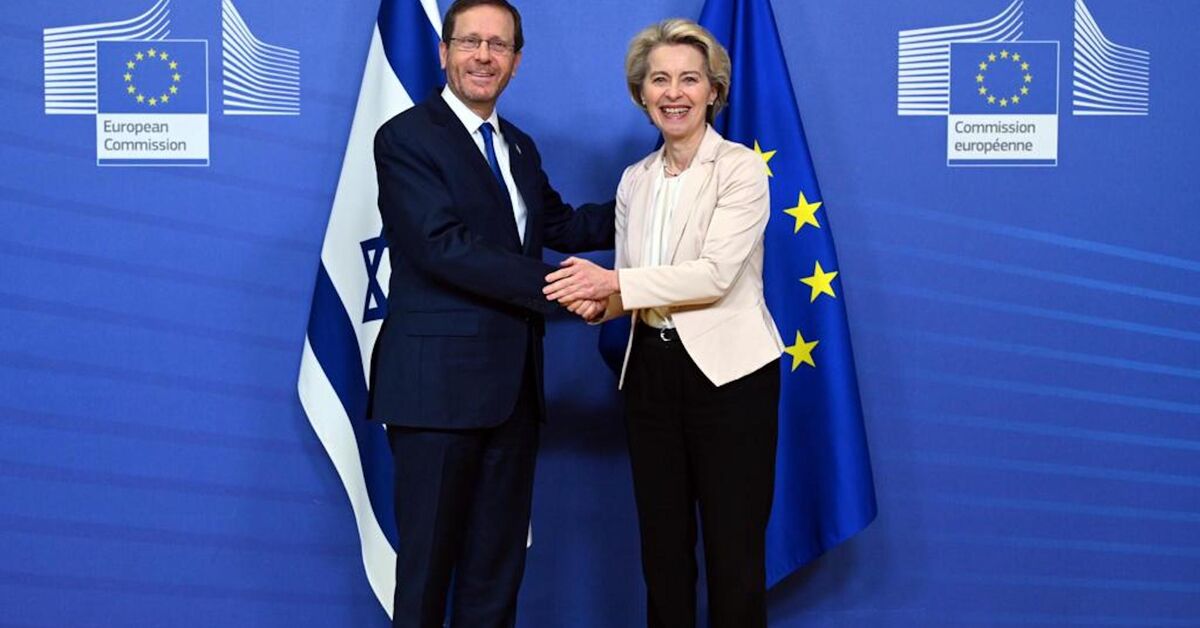 BRUSSELS – Israeli President Isaac Herzog met the President of the European Commission Ursula von der Leyen in Brussels on Wednesday. He urged European leaders to take a stronger stance on Iran and discussed the issue of Israeli prisoners held by Hamas.

Herzog arrived in Belgium on Wednesday morning for a two-day visit. On Thursday he will address the European Parliament on the occasion of International Holocaust Remembrance Day, and then meet with NATO Secretary General Jens Stoltenberg.

Prior to the meeting with Von der Leyen, the Belgian King Philippe received Herzog in the royal palace. In both meetings, Herzog stressed the danger Iran poses to regional and world stability as it rushes toward nuclear capabilities, supports global terrorism and supplies Russia with weapons to use against the Ukrainian people.

Herzog’s visit comes against the backdrop of an attack in Europe against Iran. The European Parliament last week called on European leaders to add the Islamic Revolutionary Guard Corps (IRGC) to the European list of terror organizations and to strengthen sanctions against Iranian figures linked to human rights abuses in the country.

The council of European foreign ministers, which met on Monday, took no action to blacklist the IRGC, but it did approve a fourth wave of sanctions against Iran, adding 37 personalities and entities to the sanctions list. European Commissioner for Foreign Affairs Josep Borrell explained that in order to be blacklisted, a group must first be classified as a terrorist organization by a qualified European court. As for negotiations for a new nuclear deal with Iran, Borrell said the deal has stalled.

See also  Parents..the most violent with the child

“The deal is not dead, but it is not moving,” the EU official said.

Before leaving for Brussels, Herzog said Iran will be at the top of the agenda, but he also mentioned the issue of hostages.

“I will, of course, raise the huge challenge we and the entire Middle East face in the form of Iran…I will also raise the issue of hostages and MIAs, our sons, whom we are calling Hamas to release immediately and return to Israel. ,” he said.

Herzog referred to the bodies of two IDF soldiers – Hadar Goldin and Oron Shaul – who have been held by Hamas since 2014, and two Israeli nationals – Avera Mengistu and Hisham Al-Sayed – who were captured by Hamas when they crossed the border with Israel in 2014. crossing the Gaza Strip and 2015, respectively. This month, Hamas published a video in which Mengistu begged for release. Israel did not outright confirm that the person appearing in the video was indeed Mengistu, but Prime Minister Benjamin Netanyahu said the video proved what Israel had always claimed, namely that Mengistu is indeed alive.

The Lebanese newspaper Al Akhbar, close to Hezbollah, reported Wednesday that Hamas hopes to reach a prisoner exchange deal with Netanyahu’s government. That was the reason, read the report, that the group published the video last week.