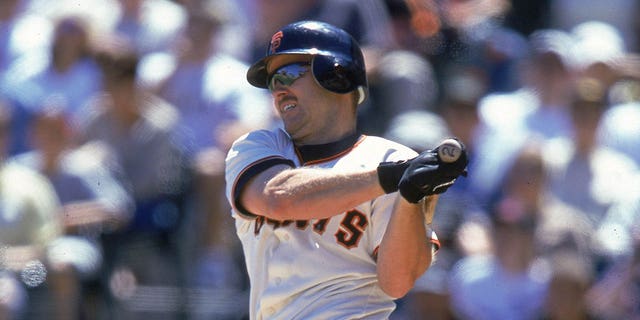 Jeff Kent was a .290 career hitter and hit the most home runs ever for a second baseman (377).

Yet he failed to get even 50% of the vote in his final year of Hall of Fame eligibility.

Jeff Kent #21 of the San Francisco Giants bats during the game against the Atlanta Braves at Pac Bell Park in San Francisco, California.
(Tom Hauck/Allsport)

Players need a minimum of 75% to get in, and only Scott Rolen got the required percentage on Tuesday night.

Kent won an MVP with the San Francisco Giants in 2000, racking up 2,461 hits and 1,518 RBIs, both more than Rolen. Kent also won four Silver Slugger Awards, while Rolen earned one.

You could certainly make the case that Kent should be there, especially with Rolen now getting a plaque in Cooperstown – and Kent is making his case.

“Voting over the years has been too much of an embarrassment,” Kent told the San Francisco Chronicle. “Baseball loses a few generations of great players who were the best in their day because a few non-voters continue to compare those players to players who have voted for generations and affect the votes.”

Rolen’s excellent defense gave him the higher career WAR (wins over replacement) – 70.1 to 55.4. An eight-time Gold Glove Award winner, he hit .281 with an .855 OPS in his 17-year career. Kent failed to win the defensive award.

Sophisticated analytics has allowed voters to analyze careers in more depth than ever before, helping Rolen’s case and keeping the conversation going for many other players.

In his first year of eligibility, Rolen received 10.2% of the vote, the lowest ever for an eventual Hall of Famer. Kent only managed 14.0% in his sophomore year, but his 46.5% yesterday was the highest he had ever achieved.

San Francisco Giant Jeff Kent pumps his fist after hitting a two-run home run against the Anaheim Angels in the sixth inning of Game Five of the World Series in San Francisco on October 24, 2002.
(MONICA DAVEY/TUSEN via Getty Images)

Kent’s only hope is that future committees will vote him out, which has been the way of Harold Baines, Gil Hodges and Fred McGriff in recent years.